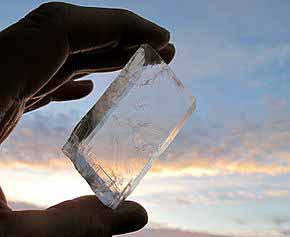 The sunstone (Icelandic: solarsteinn) is a type of mineral attested in several 13thŴ14th century written sources in Iceland, one of which describes its use to locate the sun in a completely overcast sky. Sunstones are also mentioned in the inventories of several churches and one monastery in 14th -15th century Iceland. A theory exists that the sunstone had polarizing attributes and was used as a navigation instrument by seafarers in the Viking Age.

In 1667, Danish archaeologist Thorkild Ramskou posited that the sunstone could have been one of the minerals (cordierite or Iceland spar) that polarize light and by which the azimuth of the sun can be determined amid a partly overcast sky or when the sun is just below the horizon.

The principle is used by many animals and was applied during polar flights before more advanced techniques became available. Ramskou further conjectured that the sunstone could have aided navigation in the open sea in the Viking period. This idea has become very popular, but no extant records of the use of a sunstone for navigation exist in the medieval literature, and used alone, a polarizing mineral only gives the horizontal angle of the sun (azimuth), which is only of marginal value when navigating the open sea.

A polarizing crystal would have been useful as a sundial, especially at high latitudes with extended hours of twilight, in mountainous areas or in partly overcast conditions, although only in conjunction with known landmarks; churches and monasteries would have valued such an object as an aid to keep track of the canonical hours.

Interestingly, in the late 40's the US National Bureau of Standards (now NIST) developed a Sky Compass based on the same principle. It was inspired by a previous "twilight compass" developed by Dr. A. H. Pfund of Johns Hopkins University. From a NBS 1949 paper:

"The principal advantage of the sky compass is during twilight, and when the sun is several degrees below the horizon, as well as when the region of the sky containing the sun is overcast, so long there is a clear patch of sky overhead. The sky compass is thus of particular value when the sun compass and the sextant are not usable. Since the extent of polarization of the sky's light is greatest at right angles to the incident beam of sunlight, the compass is most accurate in the polar regions, where it is also most useful, because of the long duration of twilight ."

When Ramskou originally proposed this theory, it was well received and widely accepted by the general public and also by the scientific community, and remained so for more than two decades. The Viking navigational triumphs became very fashionable, especially the exploits of Eirik the Red circa 1000 AC and the "discovery" of America centuries before Columbus. Scientific American and National Geographic magazines carried the story of skylight navigation.

However, in the 90's the theory was disputed on the basis that no real material proof exists and that the advantage provided to navigation would have been marginal. My personal take is that polarized skylight could have been of real use to the Vikings but, until direct evidence is found, one should be skeptic and stick to the simplest explanation: that the Norsemen where damn good sailors.


Computer simulations show Viking's sunstone to be very accurate   PhysOrg - April 5, 2018
A pair of researchers has run computer simulations that suggest that tales of Vikings using a sunstone to navigate in cloudy weather might be true. They describe the factors that contributed to their simulations and what they found by running them. Results show that the sky-polarimetric navigation is surprisingly successful on both days of the spring equinox and summer solstice even under cloudy conditions if the navigator determined the north direction periodically at least once in every 3 hours independently of the type of sunstone used for the analysis of sky polarization. This explains why the Vikings could rule the Atlantic Ocean for 300 years and could reach North America without a magnetic compass. Our findings suggest that it is not only the navigation periodicity in itself that is important for higher navigation success rates, but also the distribution of times when the navigation procedure carried out is as symmetrical as possible with respect to the time point of real noon.


Did Vikings navigate with 'sunstone'?  MSNBC - February 1, 2011
A Viking warship replica, Havhingsten af Glendalough (the Sea Stallion of Glendalough), makes its way into Dublin's port in 2007. New research suggests the Vikings used sunstones to navigate in cloudy and foggy conditions. Vikings could have navigated the oceans in inclement weather with the aid of a crystal that pinpointed the sun's location behind banks of clouds and fog, a new study suggests. Such a tool, known as a sunstone, is known from legend, but until now experimental evidence that it could actually work as hypothesized was lacking. Results were published online on Monday in Philosophical Transactions of the Royal Society B.

The Vikings were Scandinavian seafarers who traveled widely in the North Atlantic, roughly between the year 900 and 1200. Under clear and partly cloudy skies, archaeological evidence indicates that they used sundials to find their way around. But a sundial is only useful when the sun is shining, raising the question of how the Vikings navigated in cloudy and foggy conditions, which can last for days along their known sailing routes.

In the 1960s, Danish archaeologist Thorkild Ramskou suggested that the Vikings used a sunstone to filter the sunlight so that it all had the same polarization, or direction. By rotating the crystal to and fro, the light would appear brighter or darker, depending on how the crystal was oriented. The brightest point would be toward the direction of the sun.

Two sunstone readings from different points in the sky would allow navigators to pinpoint the sun's location. They could then hold up a torch in that direction to mimic the sun's location, allowing its light to cast a shadow on the sundial.

A widely cited reference to this method of navigation appears in the Sigurd legend, a Viking saga. Horvath and his colleagues refer to the passage in their paper:

"The weather was very cloudy. It was snowing. Holy Olaf the king sent out somebody to look around, but there was no clear point in the sky. Then he asked Sigurd to tell him where the sun was. After Sigurd complied, he grabbed a sunstone, looked at the sky and saw from where the light came, from which he guessed the position of the invisible sun. It turned out that Sigurd was right."

To answer the critics, the researchers made photographs of cloudy skies with a fisheye lens and asked subjects in the lab to find the sun. The experimental subjects had errors as great as 99 percent, leading the researchers to report that "Viking navigators might have needed some aid to navigate on open seas during cloudy or foggy weather conditions."

So they tested out the sunstone idea under a range of weather conditions on expeditions to Tunisia, a sail across the Arctic Ocean, and at home in Hungary. For a "sunstone" they used a polarimeter, a device that measures polarization.

Their results showed that the method worked in cloudy and foggy weather, though the method wasn't as reliable under completely overcast skies. Further research will test whether the actual crystals from Scandinavia and Iceland work as well as the sensitive polarimeter.

Christian Keller, a specialist in North Atlantic archaeology at the University of Oslo, told Nature News that he is open to the idea that the Vikings used sunstones to help navigate. However, he said the available evidence suggests that they used the sun's position on clear days as a guide, combined with knowledge about the flight patterns of birds and the migration paths of whales, among other cues. "You don't need to be a wizard," he said. "But you do need to combine a lot of different sorts of observations."

Using polarized light for navigation is common in nature, as highlighted in the other papers published this week in Philosophical Transactions B. In one study, for example, Australian researchers conclusively demonstrate that honeybees steer with the aid of a built-in polarization compass.

Another study shows that when dung beetles navigate using the polarization patterns of the moon, they're as accurate in celestial navigation under a crescent moon as they are under a full moon, and that their skill equals that measured for species that orient themselves using the sun, which is up to 100 million times brighter.

But researchers from the University of Queensland in Australia found that other navigating species such as loggerhead sea turtles, which are known to orient via a magnetic compass, appear unable to use polarized light for navigation, at least when they're juveniles.