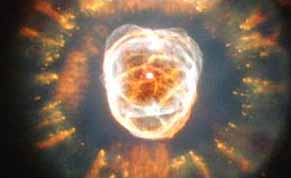 The universe consists of all matter, light, and other forms of radiation and energy that have been discovered by man. The universe also consists of everything that man believes to be present in space / time as a result of his theories. This includes the Earth, solar system, stars which includes our sun. Most people believe that the universe is expanding.


ARTICLES ABOUT THE UNIVERSE


We could be living in a small Universe where space is curved in on itself, rather like a soccerball. More precisely, we may inhabit a dodecahedral cosmos. Dodecahedrons, and similar shapes, have long fascinated mankind. Plato believed that the Universe was made up of them. Leonardo da Vinci also studied them, as did the great astronomer Kepler, who thought the structure of the Solar System was based on geometrical shapes.