Cache of 'Jesus coins' discovered near Sea of Galilee

Fifty-eight rare, thousand-year-old coins bearing the likeness of Jesus have been discovered in an area of the Holy Land that was predominantly Muslim at the time.

The "Jesus coins" - the largest such collection uncovered to date - were among thousands of bronze items discovered last October at an archaeological site near the Sea of Galilee, Hebrew University professor Yizhar Hirschfeld said Wednesday.

"It's a treasure, there's nothing like it in the whole world," said Gila Hurvitz, the curator and designer of the exhibit, now on display at the university's archaeological school. "He hit the jackpot."

Some of the uneven, blue-green coins show Jesus standing with a cross behind him, others have him sitting on a throne; another is a depiction of Jesus' face. The Greek inscriptions read "Jesus the Messiah, the King of Kings," or "Jesus, the Messiah, the Victor."

Another 24 coins from the Byzantine period depict Emperor Constantine X and Michael VII.

Together, the 82 coins are the only items among the thousands that are inscribed in Greek; others bear blessings written in the ancient square-like Kufic Arabic script.

Three large jugs were discovered in Tiberias, filled to the hilt with treasures - coins, broken pottery, oil lamps, candelabras, tweezers, half a pair of scissors and a single blue glass vase - dating to between the 10th and 11th centuries, when the Fatimid empire ruled Palestine.

They were hidden underground, untouched for a thousand years until October 1998, when Hirschfeld directed a 'rescue' excavation - a dig required by law before major construction takes place. He never dreamed that he would unearth the largest cache of Islamic period objects ever uncovered in Israel.

The owner, likely a collector or a dealer, may have buried two of the vases for fear of theft or invasion from Christian Crusaders, Hirschfeld said. The third and largest vase was used as a safe, Hirschfeld said, because it was hidden from view, but was easily accessed through a hole in the wall. The Crusaders, on a bloody mission to claim the Holy Land for the pope, invaded and destroyed ancient Tiberias at the end of the 11th century.

The only other "Jesus coins" ever found were located through dealers.

Researchers believe the coins were used as currency during the Fatimid period by Christians seeking to evangelize Muslims.

Two thousand years ago, masons working in an underground factory beneath Jerusalem carved stone mugs, dishes and wine jugs for priests serving in the nearby Jewish Temple.

Last week, a bulldozer clearing a road near the walled Old City of Jerusalem fell into a hole, unearthing the ancient masonry and providing physical proof of ritual purity laws described in the Bible.

The chamber, located 15 feet underground, was one of several stretching over an area measuring one-quarter of an acre. Most rooms were filled almost to the ceiling with the factory's leftovers - broken dishes, stone shards and rounded stone knobs.

Archaeologists said the discovery reaffirms the popularity of stone at the time of the Second Temple, especially among priests, because it did not have to undergo special purification rituals for use in the Temple. Unlike glass or ceramic, stone could not be contaminated by coming into contact with a dead body or a menstruating woman, both considered ritually impure.

The Second Temple, completed in 515 B.C., stood in Jerusalem for nearly 500 years before it was destroyed by the Romans in 70 A.D., and was the center of Jewish religion and ritual.

Jews were required to make annual pilgrimages to the site, where animal sacrifices were offered and prayers chanted. It was built on the site of King Solomon's Temple, destroyed in the Babylonian conquest of the Holy Land in 587 B.C.

Jon Seligman, a Jerusalem archaeologist taking reporters on a tour of the site Thursday, said vessels made in the factory were used in Temple rituals.

Bowls, dishes and other pieces found in the cave match descriptions of holy vessels in rabbinical writings of the time and are similar to pieces that have been unearthed in Jerusalem's Jewish Quarter, he said.

Seligman said he believed the cavern was dug in the first century B.C. and served both as a quarry and a factory. Masons cut stone blocks from the walls and ceilings, to be used as raw material while carving out a new workroom. As they cleared out a new chamber, the masons threw stone chips into the previous room for use in fashioning vessels.

The floor was visible only in the room the bulldozer struck, suggesting it was the most recently used. The ceiling of the white-walled chamber was blackened by patches of soot, a sign the ancients often worked by candle light.

To make a bowl, masons rounded a piece of stone and cut handles into it, then spun it on a lathe to chisel out the center. A tap on the bottom popped the core out, leaving a hollowed-out bowl or mug.

The mugs and bowls were then carted by horse or mule to the Temple a mile away, or to Jewish residents of the walled Old City, who adhered to strict ritual purity in their homes.

The factory is the largest discovered in Israel, surpassing a quarry found 15 years ago in a nearby village and showing how widespread the stone industry was at the time.

Seligman said he didn't expect to find any vessels intact, because workmen would have removed the finished products. But broken and unfinished bowls littered the floor of the cave.

The unfinished work apparently was a sign that masons had to abandon the factory quite suddenly when Jews were expelled from Jerusalem after the Romans destroyed the Second Temple. 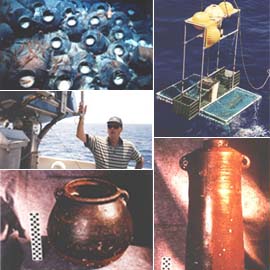 A team of oceanographers and archaeologists led by Titanic discoverer Robert D. Ballard and Harvard University archaeologist Lawrence Stager has found the world's oldest deep-sea shipwrecks in the eastern Mediterranean Sea. The wrecks promise new insights into the little-known ways of the ancient Phoenicians.

The two ships were likely lost in a storm, and both appear to have landed upright on the seafloor. Their wooden hulls have since disintegrated, but hundreds of amphorae on the seafloor spell out the shapes of the vessels that carried them. The larger ship was about 58 feet (18 meters) long, making it the largest known ship from the classical Greek era. The smaller ship measured more than 45 feet (15 meters).

HOW THEY FOUND THEM

In 1997 a U.S. Navy research submarine set out to find a lost Israeli submarine in the eastern Mediterranean. Instead their sonar returned the merest hints of a shipwreck. But until Ballard's expedition, they had no way of knowing the age or importance of their find -- or that another find would follow.

This month Ballard located and explored the two wrecks in roughly the same way he found Titanic, Bismarck, and Yorktown. He used a deepwater side-scan sonar system, which surveys a vast swath of seafloor but registers only relatively large objects.

WHAT THE FINDS TELL US

After analyzing Jason's images and recovered artifacts -- including 12 amphorae, crockery for food preparation, an incense burner, and a typically Phoenician wine decanter -- archaeologist Stager is convinced of the ships' Phoenician origins.

The Phoenicians, who populated what is now Lebanon from about 1200 B.C. to about 146 B.C., have long been known as seagoing traders. These finds, however, begin to shed light on specific trading routes and practices. These particular ships, says Stager, were probably shipping wine from Phoenicia to Egypt or Carthage, possibly as part of a cargo fleet.

"It is clear from this discovery," said Ballard, "that the deep ocean holds great promise in the field of archaeology. More important discoveries should come in the near future that could significantly alter our present understanding of ancient maritime trade."

This expedition was sponsored in part by the National Geographic Society's Expeditions Council.