As an oracle of divination and an instrument of channeling, a trumpet is a physical device through which a spirit can speak. Spirit trumpets, like the three-sectioned tin model shown here, were often used at a seance in the heyday of Mediumship. Typically, the trumpet would "float" about a darkened room (sometimes luminous bands having been affixed to the trumpet so the effect could be visualized), and "spirit" voices would issue from it. Often this was a form of illusion and trickery with the medium doing the talking.

About trumpets ... Many people await the sound of a trumpet at the end of time ... Revelation ... opening of 7 seals and 7 trumpets. 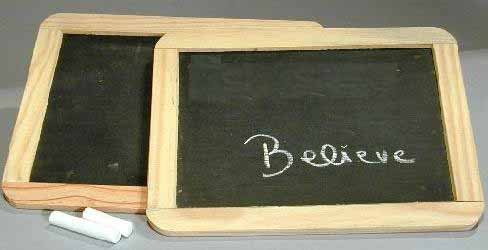 Slate writing was another popular effect of physical mediumship. Typically a pair of school slates (either separate or hinged) was employed. Placed on a table with a piece of chalk or slate pencil, and the spirits suitably invoked, the slates would in time be discovered with messages on them, purportedly from the spirit realm.

To supposedly preclude trickery, the slates were often bound or even locked. But there were many means of circumventing the intended safeguards, ranging from substituting previously prepared slates to using specially gimmicked ones.