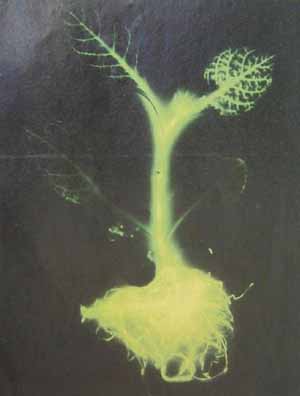 Transgenic plants possess a gene or genes that have been transferred from a different species. Although DNA of another species can be integrated in a plant genome by natural processes, the term "transgenic plants" refers to plants created in a laboratory using recombinant DNA technology. The aim is to design plants with specific characteristics by artificial insertion of genes from other species or sometimes entirely different kingdoms. See also Genetics, List of genetic engineering topics.

Varieties containing genes of two distinct plant species are frequently created by classical breeders who deliberately force hybridization between distinct plant species when carrying out interspecific or intergeneric wide crosses with the intention of developing disease resistant crop varieties. Classical plant breeders use a number of in vitro techniques such as protoplast fusion, embryo rescue or mutagenesis to generate diversity and produce plants that would not exist in nature (see also Plant breeding, Heterosis, New Rice for Africa).

Such traditional techniques (used since about 1930 on) have never been controversial, or been given wide publicity except among professional biologists, and have allowed crop breeders to develop varieties of basic food crop, wheat in particular, which resist devastating plant diseases such as rusts. Hope is one such wheat variety bred by E. S. McFadden with a gene from a wild grass. Hope saved American wheat growers from devastating stem rust outbreaks in the 1930s.

Methods used in traditional breeding that generate plants with DNA from two species by non-recombinant methods are widely familiar to professional plant scientists, and serve important roles in securing a sustainable future for agriculture by protecting crops from pests and helping land and water to be used more efficiently.

This natural gene movement between species has been widely detected during genetic investigation of various natural mobile genetic elements, such as transposons, and retrotransposons that naturally translocate to new sites in a genome, and often move to new species over an evolutionary time scale. There are many types of natural mobile DNAs, and they have been detected abundantly in food crops such as rice.

These various mobile genes play a major role in dynamic changes to chromosomes during evolution and have often been given whimsical names, such as Mariner, Hobo, Trans-Siberian Express (Transib), Osmar, Helitron, Sleeping Princess, MITE and MULE, to emphasize their mobile and transient behavior.

Genetically mobile DNA contitututes a major fraction of the DNA of many plants, and the natural dynamic changes to crop plant chromosomes caused by this natural transgenic DNA mimics many of the features of plant genetic engineering currently pursued in the laboratory, such as using transposons as a genetic tool, and molecular cloning.

There is new scientific literature about natural transgenic events in plants, through movement of natural mobile DNAs called MULEs between rice and Setaria millet.

It is becoming clear that natural rearrangements of DNA and horizontal gene transfer play a pervasive role in natural evolution. Importantly many, if not most, flowering plants evolved by transgenesis - that is, the creation of natural interspecies hybrids in which chromosome sets from different plant species were added together. There is also the long and rich history of interspecies cross-breeding with traditional methods.

Production of transgenic plants in wide-crosses by plant breeders has been a vital aspect of conventional plant breeding for about a century. Without it, security of our food supply against losses caused by crop pests such as rusts and mildews would be severely compromised. The first historically recorded interspecies transgenic cereal hybrid was actually between wheat and rye (Wilson, 1876).

In the 20th century, the introduction of alien germplasm into common foods was repeatedly achieved by traditional crop breeders by artificially overcoming fertility barriers. Novel genetic rearrangements of plant chromosomes, such as insertion of large blocks of rye (Secale) genes into wheat chromosomes ('translocations'), has also been exploited widely for many decades.

By the late 1930s with the introduction of colchicine, perennial grasses were being hybridized with wheat with the aim of transferring disease resistance and perenniality into annual crops, and large-scale practical use of hybrids was well established, leading on to development of Triticosecale and other new transgenic cereal crops.

The intentional creation of transgenic plants by laboratory based recombinant DNA methods is more recent (from the mid-70s on) and has been a controversial development in the field of biotechnology opposed vigorously by many NGOs, and several governments, particularly within the European Community. These transgenic recombinant plants (biotech crops, modern transgenics) are transforming agriculture in those regions that have allowed farmers to adopt them, and the area sown to these crops has continued to grow globally in every years since their first introduction in 1996.

Transgenic recombinant plants are generated in a laboratory by adding one or more genes to a plant's genome,and the techniques frequently called transformation. Transformation is usually achieved using gold particle bombardment or through the process of Horizontal gene transfer using a soil bacterium, Agrobacterium tumefaciens, carrying an engineered plasmid vector, or carrier of selected extra genes.

Transgenic recombinant plants are identified as a class of genetically modified organism(GMO); usually only transgenic plants created by direct DNA manipulation are given much attention in public discussions. Transgenic plants have been deliberately developed for a variety of reasons: longer shelf life, disease resistance, herbicide resistance, pest resistance, non-biological stress resistances, such as to drought or nitrogen starvation, and nutritional improvement (see Golden rice).

The first modern recombinant crop approved for sale in the US, in 1994, was the FlavrSavr tomato, which was intended to have a longer shelf life. The first conventional transgenic cereal created by scientific breeders was actually a hybrid between wheat and rye in 1876 (Wilson, 1876).

The first transgenic cereal may have been wheat, which itself is a natural transgenic plant derived from at least three different parenteral species.

Genetically modified organisms were prior to the coming of the commercially viable crops as the FlavrSavr tomato, only strictly grown indoors (in laboratories). However, after the introduction of the Flavr Savr tomato, certain GMO-crops as GMO-soy and GMO-corn where in the USA being grown outdoors on large scales.

Commercial factors, especially high regulatory and research costs, have so far restricted modern transgenic crop varieties to major traded commodity crops, but recently R&D projects to enhance crops that are locally important in developing counties are being pursued, such as insect protected cow-pea for Africa and insect protected Brinjal eggplant for India.

Transgenic plants have been used for bioremediation of contaminated soils. Mercury, selenium and organic pollutants such as polychlorinated biphenyls (PCBs) have been removed from soils by transgenic plants containing genes for bacterial enzymes.

Outcrossing of transgenic plants not only poses potential environmental risks, it may also trouble farmers and food producers. Many countries have different legislations for transgenic and conventional plants as well as the derived food and feed, and consumers demand the freedom of choice to buy GM-derived or conventional products. Therefore, farmers and producers must separate both production chains. This requires coexistence measures on the field level as well as traceability measures throughout the whole food and feed processing chain. Research projects such as Co-Extra, SIGMEA and Transcontainer investigate how farmers can avoid outcrossing and mixing of transgenic and non-transgenic crops, and how processors can ensure and verify the separation of both production chains.