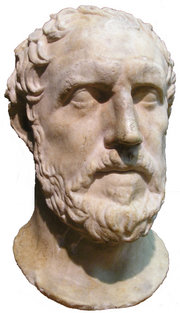 Thucydides (between 460 and 455 BC- circa 400 BC, was an ancient Greek historian, and the author of the History of the Peloponnesian War, which recounts the 5th century BC war between Sparta and Athens. This work is widely regarded a classic, and represents the first work of its kind.

Almost everything we know about the life of Thucydides comes from his own History of the Peloponnesian War. Thucydides' father was Olorus, a name connected with Thrace and Thracian royalty.

He was a man of influence and wealth. He owned gold mines at Scapte Hyle, a district of Thrace on the Thracian coast opposite the island of Thasos.

Thucydides, born in Alimos, was connected through family to the Athenian statesman and general Miltiades, and his son Cimon, leaders of the old aristocracy supplanted by the Radical Democrats. Thucydides lived between his two homes, in Athens and in Thrace. His family connections brought him into contact with the very men who were shaping the history he wrote about.

He was probably in his twenties when the Peloponnesian War began in 431 BC. He contracted the plague4 that ravaged Athens between 430 and 427 BC, killing Pericles, in 429 BC, along with thousands of other Athenians.

In 424 BC he was appointed strategos (general), and given command of a squadron of seven ships, stationed at Thasos, probably because of his connections to the area. During the winter of 424/3 BC, the Spartan general Brasidas attacked Amphipolis, a half-day's sail west from Thasos on the Thracian coast. Eucles, the Athenian commander at Amphipolis, sent for assistance to Thucydides.

In 424 BC he was appointed strategos (general), and given command of a squadron of seven ships, stationed at Thasos, probably because of his connections to the area. During the winter of 424/3 BC, the Spartan general Brasidas attacked Amphipolis, a half-day's sail west from Thasos on the Thracian coast. Eucles, the Athenian commander at Amphipolis, sent for assistance to Thucydides.

Brasidas, aware of Thucydides' presence on Thasos and his influence with the people of Amphipolis and afraid of help arriving by sea, acted quickly to offer moderate terms to the Amphipolitans for their surrender, which they accepted. Thus when Thucydides arrived, Amphipolis was already under Spartan control.

Amphipolis was of considerable strategic importance, and news of its fall caused great consternation in Athens.

Because of his failure to save Amphipolis, Thucydides says:

It was also my fate to be an exile from my country for twenty years after my command at Amphipolis; and being present with both parties, and more especially with the Peloponnesians by reason of my exile, I had leisure to observe affairs somewhat particularly.

Using his status as an exile from Athens to travel freely among the Peloponnesian allies, he was able to view the war from the perspective of both sides. He may have travelled to Sicily for the Sicilian Expedition, although the extent of his local knowledge is debated. During this period of time he conducted important research for his history.

According to Pausanias, someone named Oenobius was able to get a law passed allowing Thucydides to return to Athens, presumably sometime shortly after Athens' surrender and the end of the war in 404 BC.

Pausanias goes on to say that Thucydides was murdered on his way back to Athens. Some doubt this account, seeing evidence to suggest he lived as late as 397 BC. In any case, although he lived past the end of the war, he did not complete his history.

The abrupt end of his narrative which breaks off in the middle the year 411 BC, suggests that he may have died while writing the book.

His remains were returned to Athens and were laid in Cimon's family vault.

His character was said to be dry, humorless and pessimistic. Thucydides admired Pericles and approved of his power over the people, though he detested the more pandering demagogues who followed him. Thucydides did not approve of the radical democracy Pericles ushered in but thought that it was acceptable when in the hands of a good leader.

His character was said to be dry, humorless and pessimistic. Thucydides admired Pericles and approved of his power over the people, though he detested the more pandering demagogues who followed him. Thucydides did not approve of the radical democracy Pericles ushered in but thought that it was acceptable when in the hands of a good leader.

Thucydides is generally regarded as one of the first true historians. Unlike his predecessor Herodotus (often called "the father of history") who included rumors and references to myths and the gods in his writing, Thucydides assiduously consulted written documents and interviewed participants in the events that he records. Certainly he held unconscious biases - for example, to modern eyes he seems to underestimate the importance of Persian intervention - but Thucydides was the first historian who seems to be attempting to be completely objective. By his discovery of historic causation he created the first scientific approach to history.

The only major difference between Thucydides' history and that of a modern historian is that Thucydides' history includes lengthy speeches which, as he himself describes, were as best as could be remembered of what was said (or, perhaps, what he thought ought to have been said). These speeches are used in a literary manner. Take, for example, Pericles' funeral speech, which includes an impassioned moral defense of democracy, heaping honor on the dead until it is often quoted in war memorials:

The whole earth is the sepulchre of famous men; they are honoured not only by columns and inscriptions in their own land, but in foreign nations on memorials graven not on stone but in the hearts and minds of men.

Although attributed to Pericles, this passage appears to have been written by Thucydides for deliberate contrast with the account of the plague in Athens which immediately follows it:

Though many lay unburied, birds and beasts would not touch them, or died after tasting them. ... The bodies of dying men lay one upon another, and half-dead creatures reeled about the streets and gathered round all the fountains in their longing for water. The sacred places also in which they had quartered themselves were full of corpses of persons that had died there, just as they were; for as the disaster passed all bounds, men, not knowing what was to become of them, became utterly careless of everything, whether sacred or profane. All the burial rites before in use were entirely upset, and they buried the bodies as best they could. Many from want of the proper appliances, through so many of their friends having died already, had recourse to the most shameless sepultures: sometimes getting the start of those who had raised a pile, they threw their own dead body upon the stranger's pyre and ignited it; sometimes they tossed the corpse which they were carrying on the top of another that was burning, and so went off.

In addition to disputing his status as the first historian, some authors, including Richard Ned Lebow, reject the common perception of Thucydides as a historian of naked real-politik. Actors on the world stage who had read his work would all have been put on notice that someone would be scrutinizing their actions with a reporter's dispassion, rather than the mythmaker's and poet's compassion and thus consciously or unconsciously participating in the writing of it. His Melian dialogue is a lesson to reporters and to those who believe one's leaders are always acting with perfect integrity on the world stage.

Thucydides does not take the time to discuss the arts, literature or society in which the book is set and in which Thucydides himself grew up. Thucydides was writing about an event and not a period and as such took lengths not to discuss anything which he considered unrelated. The Peloponnesian War was under major revision by Thucydides at the moment of his death, following a renewed realization on his part of the significance of the Persian influence to the events of the war. Thucydides