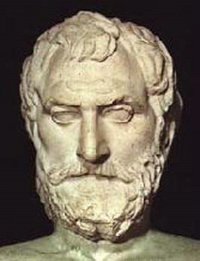 Thales of Miletus (ca. 635 BC-543 BC), also known as Thales the Milesian, was a pre-Socratic Greek philosopher and one of the Seven Sages of Greece. Many regard him as the first philosopher in the Greek tradition as well as the father of science.

Thales lived in the city of Miletus, in Ionia, now western Turkey. According to Herodotus, he was of Phoenician descent. It was said that Thales had no children but adopted his nephew as his son.

The well-traveled Ionians had many dealings with Egypt and Babylon, and Thales may have studied in Egypt as a young man. In any event, Thales almost certainly had exposure to Egyptian mythology, astronomy, and mathematics, as well as to other traditions alien to the Homeric traditions of Greece. Perhaps because of this his inquiries into the nature of things took him beyond traditional mythology.

Several anecdotes suggest that Thales was not solely a thinker; he was involved in business and politics. One story recounts that he bought all the olive presses in Miletus after predicting the weather and a good harvest for a particular year. Another version of this same story states that he bought the presses to demonstrate to his fellow Milesians that he could use his intelligence to enrich himself. However, looking at his way of thinking, getting rich was not his intent; merely to show people that by being a philosopher it was easy to enrich himself without it being the point of the exercise. Herodotus recorded that Thales advised the city-states of Ionia to form a federation.

Thales is said to have died in his seat, while watching an athletic contest.

Before Thales, the Greeks explained the origin and nature of the world through myths of anthropomorphic gods and heroes. Phenomena like lightning or earthquakes were attributed to actions of the gods.

By contrast, Thales attempted to find naturalistic explanations of the world, without reference to the supernatural. He explained earthquakes by imagining that the Earth floats on water, and that earthquakes occur when the Earth is rocked by waves. Herodotus cites him as having predicted the solar eclipse of 585 BC that put an end to fighting between the Lydians and the Medes.

Thales' most famous belief was his cosmological doctrine, which held that the world originated from water. Aristotle considered this belief roughly equivalent to the later ideas of Anaximenes, who held that everything in the world was composed of air. Thus it is sometimes assumed that Thales considered everything to be made from water. According to Lloyd, however, it is likely that while Thales saw water as an origin, he never pondered whether water continued to be the substance of the world.

Thales had a profound influence on other Greek thinkers and therefore on Western history. Some believe Anaximander was a pupil of Thales. Early sources report that one of Anaximander's more famous pupils, Pythagoras, visited Thales as a young man, and that Thales advised him to travel to Egypt to further his philosophical and mathematical studies.

When you specifically look at the influence Thales had in the pre-Socrates era, he was one of the first thinkers who thought more in the way of logos than mythos. The difference between these two more profound ways of seeing the world is that mythos is concentrated around the stories of holy origin, while logos is concentrated around the argumentation. When the mythical man wants to explain the world the way he sees it, he explains it based on gods and powers.

The mythical thought does not differ between things and persons and furthermore it does not differ between nature and culture. The way a logos thinker would present the view on the world is radically different than the mythical thinker. In its concrete form, logos is a way of thinking not only about individualism, but also the abstract. Furthermore, it focuses on sensible and continuous argumentation. This lays the foundation of philosophy and it's way of explaining the world in terms of abstract argumentation, and not in the way of gods and mythical stories.

Thales is credited with first popularizing geometry in ancient Greek culture, mainly that of spatial relationships. He is the first one who separated trigonometry as an independent group from Mathematics, to be one of the four basic "elements" of geometry. The other three elements of geometry are about long, square and cube of an object.

Most of our sources for information on the Miletian philosophers (Thales, Anaximander, and Anaximenes) are the works of much later writers. The primary source for Thales' philosophy is Aristotle, who credited him with the first inquiry into the causes of things.

Thales may or may not have written books. It is certain, however, that Aristotle did not have access to any work of Thales, and was writing from secondary sources of his own. While Thales' historical importance is unquestioned, this introduces a good deal of uncertainty into our understanding of him.

Nietzsche, in his Philosophy in the Tragic Age of the Greeks, wrote: "Greek philosophy seems to begin with an absurd notion, with the proposition that water is the primal origin and the womb of all things. Is it really necessary for us to take serious notice of this proposition? It is, and for three reasons. First, because it tells us something about the primal origin of all things; second, because it does so in language devoid of image or fable, and finally, because contained in it, if only embryonically, is the thought, 'all things are one.'"