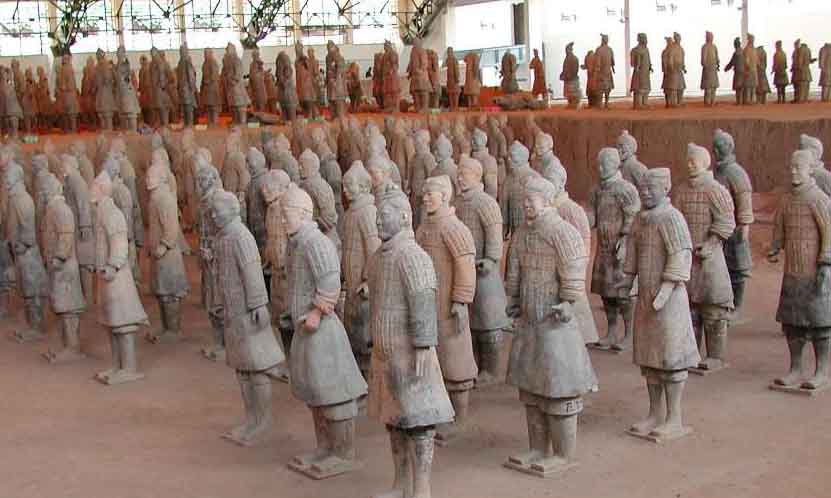 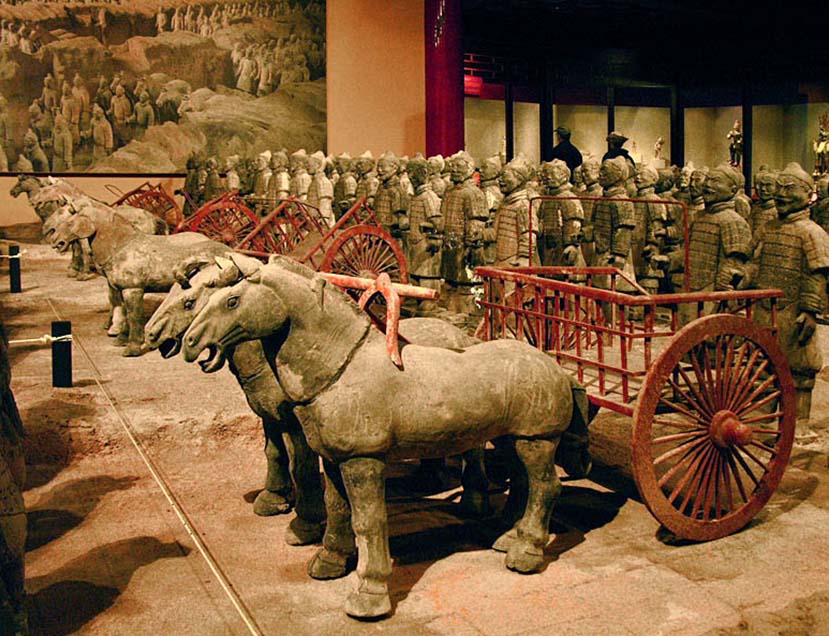 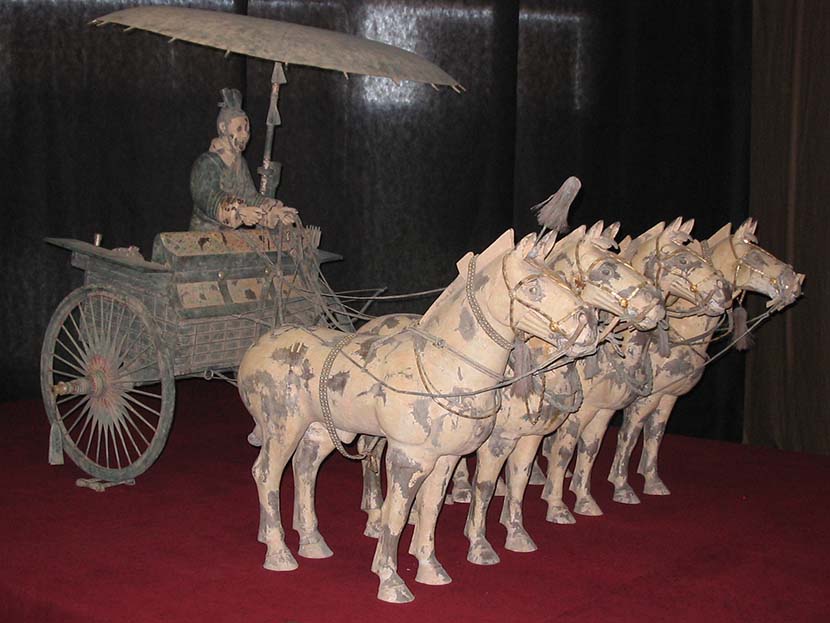 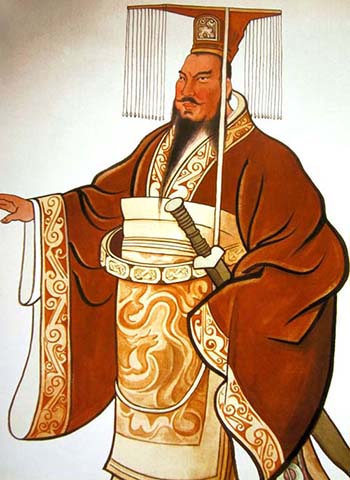 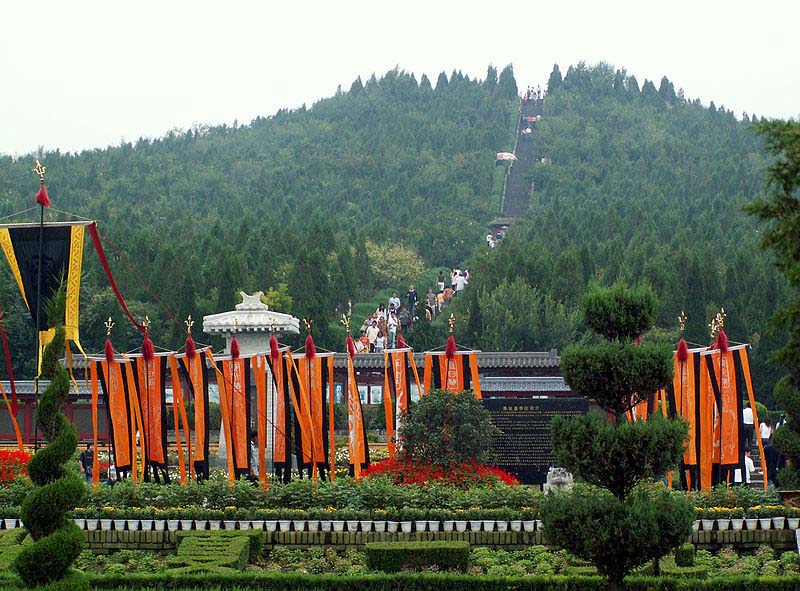 The Terracotta Army serve as a garrison to his Musoleum. 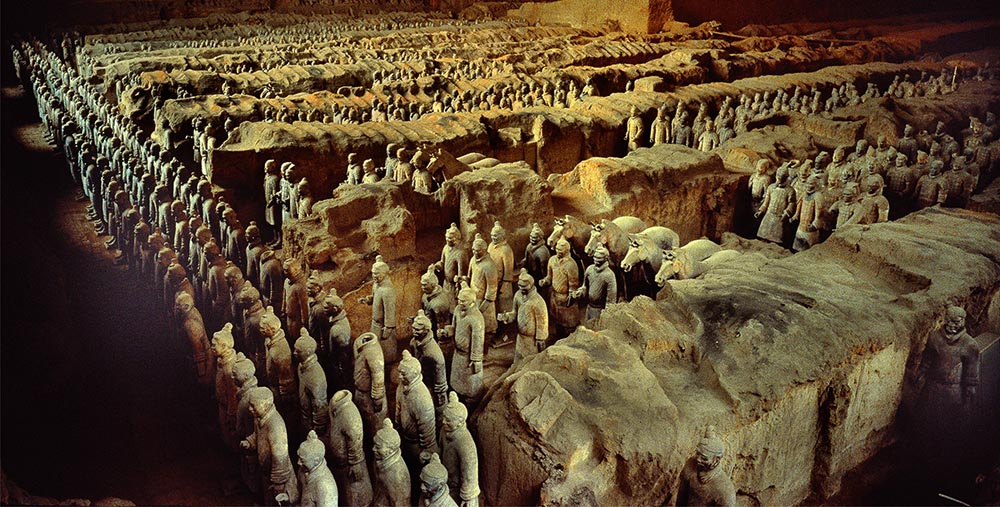 New clues about Terra-Cotta Warriors -- In 246 B.C. the adolescent ruler commissioned a massive tomb furnished with everything he'd need for the next life, including an entire army of life-size terra-cotta warriors, from mighty generals to humble infantrymen. Arranged in battle formation in pits near the emperor's tomb, the clay army stood watch for more than 2,000 years. Then, in 1974, local farmers rediscovered the site while digging a well. Since then, archaeologists have puzzled over how ancient artisans produced the estimated 7,000 lifelike clay soldiers, right down to their stylish goatees and plaits of braided hair. Some have suggested that the statues were modeled after real, individual soldiers; others think they were assembled from standard clay ears, noses, and mouths, similar to the Mr. Potato Head toy.


The Terracotta Army (literally "soldier and horse funerary statues") are the Terracotta Warriors and Horses of Qin Shi Huang the First Emperor of China. The terracotta figures, dating from 210 BCE, were discovered in 1974 by several local farmers near Xi'an, Shanxi province, China near the Mausouleum of the First Qin Emperor. The figures vary in height (183-195 cm - 6ft-6ft 5in), according to their role, the tallest being the generals. The figures include warriors, chariots, horses, officials, acrobats, strongmen, and musicians. Current estimates are that in the three pits containing the Terracotta Army there were over 8,000 soldiers, 130 chariots with 520 horses and 150 cavalry horses, the majority of which are still buried in the pits.

The Terracotta Army was discovered in eastern outer suburbs of Xi'an, Shaanxi Province by local farmers drilling a water well 1.5 miles east of Lishan (a mountain). This discovery prompted archaeologists to proceed to Shaanxi Province, China to investigate. The Terracotta Army is a form of funerary art buried with the First Emperor of Qin (Qin Shi Huang, Shi Huang means the first emperor) in 210-209 BCE (he declared himself the first emperor of China in 221 BCE to the end of his life in 210 BCE). Their purpose was to help rule another empire with Shi Huang Di in the afterlife. Consequently, they are also sometimes referred to as "Qin's Armies." Mount Lishan is also where the material to make the terracotta warriors originated. In addition to the warriors, an entire man-made necropolis for the emperor has been excavated.

According to the historian Sima Qian (145-90 BCE) construction of this mausoleum began in 246 BCE and involved 700,000 workers. Qin Shi Huang was thirteen when construction began. Sima Qian, in his most famous history of China, Shiji, completed a century after the mausoleum completion, wrote that the First Emperor was buried with palaces, scenic towers, officials, valuable utensils and 'wonderful objects,' with 100 rivers fashioned in mercury and above this heavenly bodies below which he wrote were 'the features of the earth.' Some translations of this passage refer to 'models' or 'imitations' but in fact he does not use those words.

Recent scientific work at the site has shown high levels of mercury in the soil of Mount Lishan, appearing to add credence to the writing of ancient historian Sima Qian. The tomb of Shi Huang Di is near an earthen pyramid 76 meters tall and nearly 350 square meters. The tomb remains unopened, in the hope that it will remain intact. Only a portion of the site is presently excavated.

Qin Shi Huang's necropolis complex was constructed to serve as an imperial compound or palace. It comprises several offices, halls and other structures and is surrounded by a wall with gateway entrances. The remains of the craftsmen working in the tomb have also been found within its confines, and it is believed they were sealed inside alive to prevent them from divulging information about the tombs.

It was also said as a legend that the Terracotta Warriors were real soldiers, buried with Emperor Qin so that they can guard him in the next life.

The terracotta figures were manufactured both in workshops by government laborers and also by local craftsmen. The head, arms, legs and torsos were created separately and then assembled. Studies show that eight face moulds were most likely used, and then clay was added to provide individual facial features. Once assembled, intricate features such as facial expressions were added. It is believed that their legs were made in much the same way that terracotta drainage pipes were manufactured at the time. This would make it an assembly line production, with specific parts manufactured and assembled after being fired, as opposed to crafting one solid piece of terracotta and subsequently firing it. In those days, each workshop was required to inscribe its name on items produced to ensure quality control. This has aided modern historians in verifying that workshops that once made tiles and other mundane items were commandeered to work on the terracotta army. Upon completion, the terracotta figures were placed in the pits in precise military formation according to rank and duty.

The terracotta figures are life-like and life-sized. They vary in height, uniform and hairstyle in accordance with rank. The colored lacquer finish, individual facial features, and actual weapons and armor from battle were used in manufacturing these figures created a realistic appearance. The original weapons were stolen shortly after the creation of the army and the coloring has faded greatly. However, their existence serves as a testament to the amount of labour and skill involved in their construction. It also reveals the power the First Emperor possessed, enabling him to command such a monumental undertaking as this. 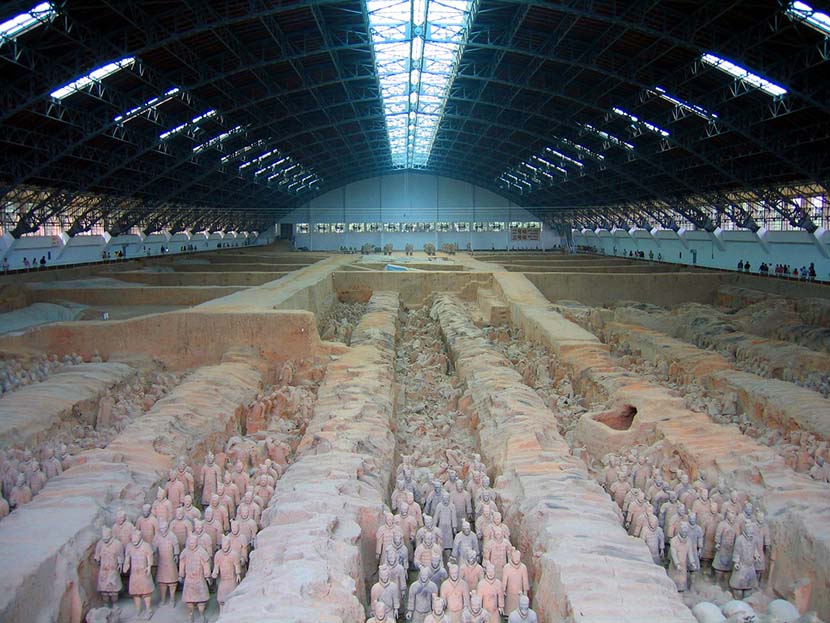 The four pits associated with the dig are about 1.5 km east of the burial ground and are about 7 meters deep. The outside walls of the tomb complex are as if placed there to protect the tomb from the east, where all the conquered states lay. They are solidly built with rammed earth walls and ground layers as hard as concrete. 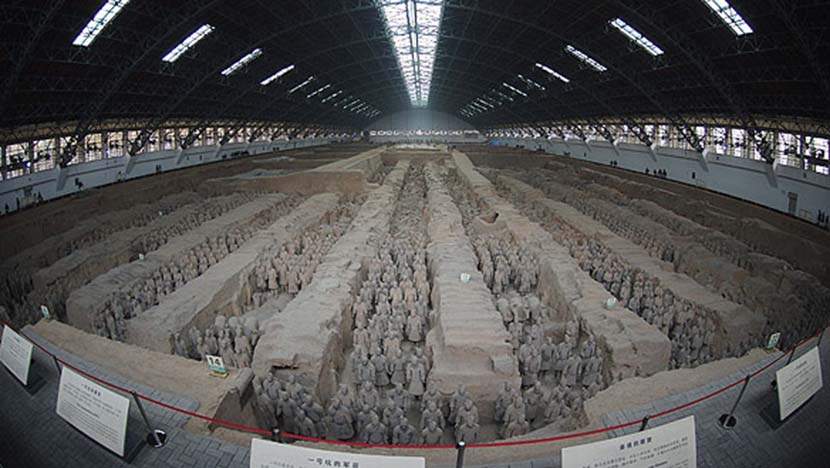 Pit one, 230 meters long, contains the main army, estimated at 8,000 figures. Pit One has 11 corridors, most of which are over 3 meters wide, and paved with small bricks with a wooden ceiling supported by large beams and posts. This design was also used for the tombs of noblemen and would have resembled palace hallways. The wooden ceilings were covered with reed mats and layers of clay for waterproofing, and then mounded with more soil making them, when built about 2 to 3 meters higher than ground level. Pit two has cavalry and infantry units as well as war chariots, and is thought to represent a military guard. Pit three is the command post, with high ranking officers and a war chariot. Pit four is empty, seemingly left unfinished by its builders. 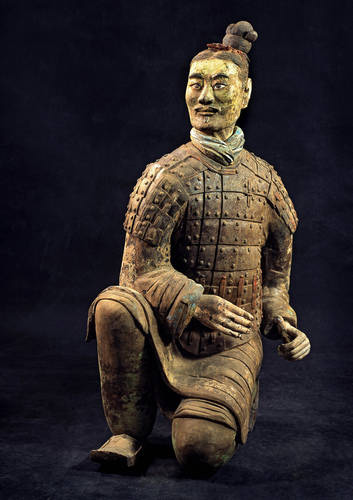 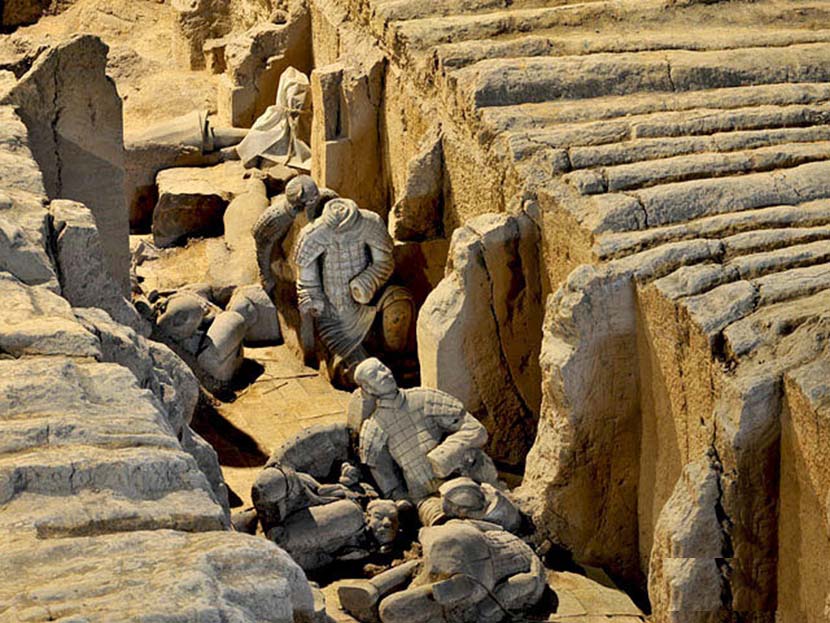 There is evidence of a large fire that burned the wooden structures that once housed the Terracotta Army. It was described by Sima Qian, who said that the fire was a consequence of a raid on the tomb by General Xiang Yu less than five years after the death of the First Emperor. According to Sima Qian, General Xiang's army looted the tomb and the structures holding the Terracotta Army, as well as setting fire to the necropolis and starting a blaze that allegedly lasted three months. Because of this, only one statue has survived intact: a statue of a kneeling archer. Despite the fire, however, much of the remains of the Terracotta Army still survives in various stages of preservation, surrounded by remnants of the burnt wooden structures.

In 1999, it was reported that the warriors were suffering from "nine different kinds of mold," caused by raised temperatures and humidity in the building which houses the soldiers, and by the breath of tourists. In addition, the South China Morning Post reported that the figures have become oxidized grey from being exposed to the air, which may cause arms to fall off, and noses and hairstyles to disappear. However, officials have dismissed these claims.

In Daily Planet Goes to China TV Series, the Terracotta Warriors segment reported that the Chinese scientists found soot on the surface of the statues, concluding that the pollution introduced from coal burning plants was responsible for the decaying of the terracotta statues.

The 2008 Sichuan earthquake caused some slight damages to several soldiers. One soldier in Pit #2 tilted to the right at 5 degrees. Several small cracks appeared on two soldiers and one horse statue in Pit #3. But overall the damage was minimal. Recently, officials have begun to bury sections of the pits, to preserve the figures.

Chinese archaeologist who 'discovered and restored' Terracotta Warriors dies at the age of 82   Daily Mail - May 22, 2018
Zhao Kangmin was largely recognized as the first archaeologist to identify fragments of terracotta which had been found by local farmers digging a well in spring, 1974. He glued together the first two clay soldiers in 1974. He also named the figures 'Terracotta Warriors' while speaking to a journalist The army were crafted around 250 BC for the tomb of China's first emperor. 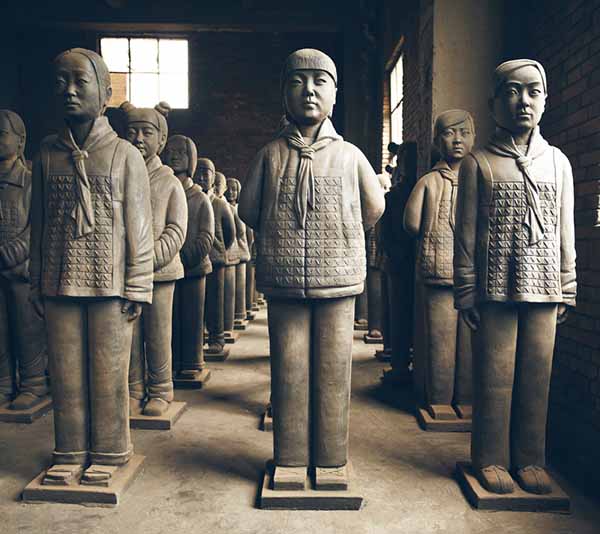 A Terracotta Army of Girls Inspired by China's Bias Toward Boys

China excels at large-scale endeavors, and art is no different. New York artist Prune Nourry was uniquely able to produce her installation Terracotta Daughters, a 116-statue update to the famed Terracotta Army, by enlisting the help of Chinese master craftsman Wen Xianfeng and traveling to Xi'an several times over the course of a year. Coming from New York the first thing that blows you away is the amount of space artists have to work with here ... some of their studios could have been museums in New York, says Zachary Bako, whose beautiful photographs document the artwork's creation. Not only was the amount of space available crucial to the project's completion, but Nourry was able to use a working Terracotta Army replica factory to produce these larger pieces. 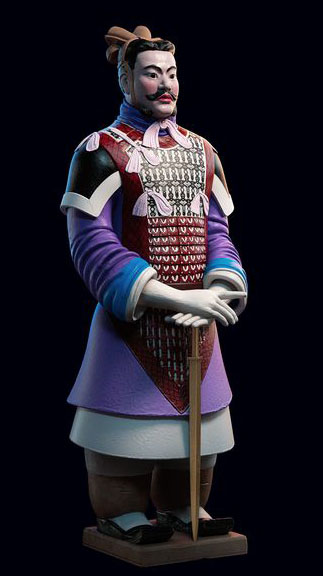 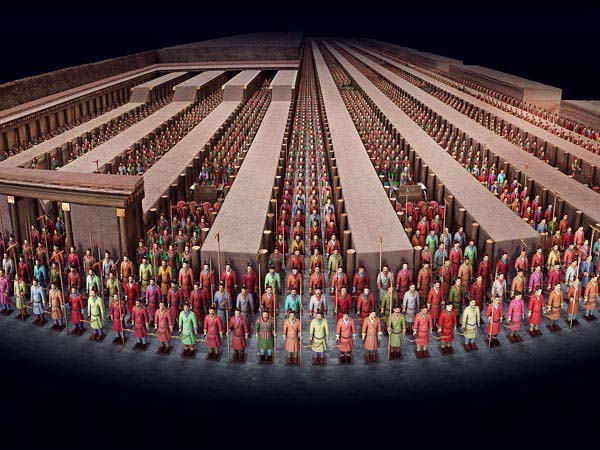 With the greatest of care, archaeologists in early June clean the head of a terra-cotta warrior in the funerary complex of China's first emperor - one of more than a hundred life-size figures uncovered during the latest phase of the excavation, which began in 2009. Archaeologists have also recently found terra-cotta horses, chariots, weaponry, and drums as well as the clay army's first known shield - proof of the equipment real-life soldiers would have carried. Excavations have been carried out here since the site, near the city of Xi'an, was discovered in 1974. The artifacts belonged to a vast man-made army meant to guard the tomb of Qin Shi Huang Di, the third-century-B.C. leader whose dynasty, Qin (pronounced CHIN), likely gave the country its modern name. When the emperor was buried more than 2,000 years ago, the warriors were brightly painted. Archaeologists are surprised that so much of the color has survived on the figures they've just uncovered.