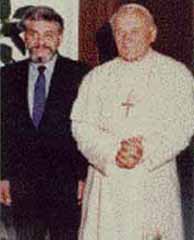 Josyp Terelya was a visionary. He is an exile from his native Ukraine living in Toronto, Canada. He survived 23 years of torture in prison based on his religious beliefs. At age 19 he was placed in prison for practicing religion in Communist Russia. He could either renounce his religion or go to jail. He successfully escaped from Soviet prisons 9 times.

As he was about to freeze to death, in jail, he prayed to the Virgin Mary. A light filled the room. He claims an apparition of the Virgin Mary came to his room to save him. At this point he claimed he forged a permanent connection with the supernatural and was a conduit for prophecy.

He has 200 prophecies. They are apocalyptic in nature. He is spoken at the white house. He has seen the Pope 36 times.

He sees earthquakes in California. It will sink into the water.

Politically, even if things seem peaceful watch out for Russian and China. They could be powder kegs ready to explode.