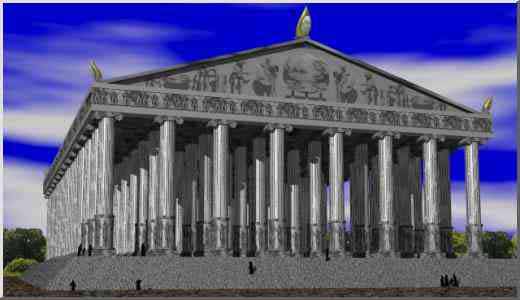 The Temple of Artemis (Greek: Artemision; Latin: Artemisium), also known as the Temple of Diana, was a Greek temple dedicated to Artemis completed around 550 BC at Ephesus (in present-day Turkey) under the Achaemenid dynasty of the Persian Empire. Nothing remains of the original temple, which was considered one of the Seven Wonders of the Ancient World.

The temple was a 120-year project started by Croesus of Lydia. It was described by Antipater of Sidon, who compiled a list of the Seven Wonders:

I have set eyes on the wall of lofty Babylon on which is a road for chariots, and the statue of Zeus by the Alpheus, and the hanging gardens, and the colossus of the Sun, and the huge labour of the high pyramids, and the vast tomb of Mausolus; but when I saw the house of Artemis that mounted to the clouds, those other marvels lost their brilliancy, and I said, 'Lo, apart from Olympus, the Sun never looked on aught (anything) so grand." (Antipater, Greek Anthology [IX.58])

The Temple of Artemis was located in the ancient city of Ephesus, about 50 km south from the modern port city of Izmir, in Turkey. Like the other wonders, Antipater chose the temple for his list not because of its beauty or size, but rather because it rested near the border of the Greek world. This inspired a sense of mystery and awe for the Greeks, and emphasized Alexander the Great's vast empire. 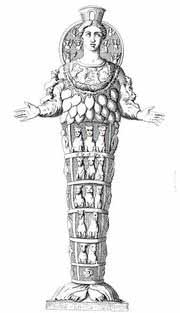 At Ephesus, a goddess whom the Greeks associated with Artemis was passionately venerated in an archaic, certainly pre-Hellenic icon. The original - of which many copies and reductions circulated in Antiquity - was carved of wood, with many breasts denoting her fertility (rather than the virginity that Hellene Artemis assumed).

Most similar to Near-Eastern and Egyptian deities, and least like Greek ones, her body and legs are enclosed within a tapering pillar-like term, from which her feet protrude. On the coins minted at Ephesus, the many-breasted Goddess wears a mural crown (like a city's walls), an attribute of Cybele (see polos). On the coins she rests either arm on a staff formed of entwined serpents or of a stack of ouroboroi, the eternal serpent with its tail in its mouth.

Like Cybele, the goddess at Ephesus was served by hierodules called megabyzae, and by (korai).

A votive inscription mentioned by Bennett (see link), which dates probably from about the 3rd century BC, associates Ephesian Artemis with Crete: "To the Healer of diseases, to Apollo, Giver of Light to mortals, Eutyches has set up in votive offering (a statue of) the Cretan Lady of Ephesus, the Light-Bearer."The Greek habits of syncretism assimilated all foreign gods under some form of the Olympian pantheon familiar to them, and it is clear that at Ephesus, the identification that the Ionian settlers made of the "Lady of Ephesus" with Artemis was slender.

The sacred site at Ephesus was far older than the Artemisium. Pausanias understood the shrine of Artemis there to be very ancient. He states with certainty that it antedated the Ionic immigration by many years, being older even than the oracular shrine of Apollo at Didyma. He said that the pre-Ionic inhabitants of the city were Leleges and Lydians.

The Temple was designed and constructed around 550 BC by the Cretan architect Chersiphron and his son Metagenes. This early construction was built at the expense of Croesus, the wealthy king of Lydia. Marshy ground was selected for the building site as a precaution against future earthquakes, according to Pliny the Elder.

The temple became a tourist attraction, visited by merchants, kings, and sightseers, many of whom paid homage to Artemis in the form of jewelry and various goods. Its splendor also attracted many worshippers, many of whom formed the cult of Artemis.

The temple was a widely respected place of refuge, a tradition that was linked in myth with the Amazons who took refuge there, both from Heracles and from Dionysus.

The temple of Artemis at Ephesus was destroyed on July 21, 356 BC in an act of arson committed by Herostratus.

The Ephesians, outraged, announced that Herostratus' name never be recorded. Strabo later noted the name, which is how we know today.

That very night, Alexander the Great was born. Plutarch remarked that Artemis was too preoccupied with Alexander's delivery to save her burning temple. Alexander later offered to pay for the Temple's rebuilding, but the Ephesians refused.

Eventually, the temple was restored after Alexander's death, in 323 BC.

This reconstruction was itself destroyed during a raid by the Goths in 262, in the time of emperor Gallienus: "Respa, Veduc and Thuruar, leaders of the Goths, took ship and sailed across the strait of the Hellespont to Asia. There they laid waste many populous cities and set fire to the renowned temple of Diana at Ephesus", reported Jordanes in Getica (xx.107).

Over the next two centuries, the majority of Ephesians converted to Christianity, and the Temple of Artemis lost its religious appeal. Christians tore down the remenants of the temple, and the stones were used in construction of other buildings.The main primary sources for the Temple of Artemis at Ephesus are in Pliny the Elder's Natural Historyand Plutarch's Life of Alexander III.5 (referencing the burning of the Artemisium).

The site of the temple was rediscovered in 1869 by an expedition sponsored by the British Museum, and while several artifacts and sculptures from the reconstructed temple can be seen there today, as for the original site, only a single column remains from the temple itself.

Most of the physical description and art within the Temple of Artemis comes from Pliny, though there are different accounts and the actual size varies.

The Temple of Artemis housed many fine artworks. Sculptures by renowned Greek sculptors Polyclitus, Pheidias, Cresilas, and Phradmon adorned the temple, as well as paintings and gilded columns of gold and silver.

The sculptors often competed at creating the finest sculpture. Many of these sculptures were of Amazons, who are said to have founded the city of Ephesus.

Pliny tells us that Scopas, who also worked on the Mausoleum of Mausollos, worked carved reliefs into the temple's columns.

The Temple of Artemis was located at an economically robust region, seeing merchants and travelers from all over Asia Minor. The temple was influenced by many beliefs, and can be seen as a symbol of faith for many different peoples. The Ephesians worshipped Cybele, and incorporated many of their beliefs into the worship of Artemis. Artemisian Cybele became quite contrasted from her Roman counterpart, Diana. The cult of Artemis attracted thousands of worshippers from far-off lands. They would all gather at the site and worship her.