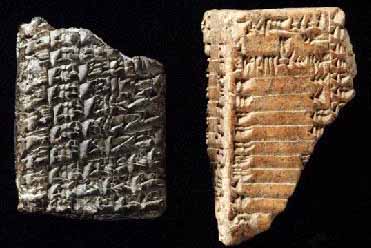 In 1992 a cuneiform tablet fragment was found at Hazor, addressed to a king named Jabin of Hazor. The royal document dates from the 18th century, indicating the name of Jabin was dynastic and in long use (fig. 7).

Tel Hazor is the largest biblical-era site in Israel, covering some 200 acres. These two clay tablets written in cuneiform were found in the vicinity of the Canaanite palace.

The ancient city of Hazor the largest and richest archeological remain in Israel, is located in the upper Galilee, north of the Sea of Galilee.Hazor was the largest Canaanite city of the 2nd millennium BC. Fourteenth century BC documents, from the El Amarna archive in Egypt, mention Hazor as an important city in Canaan as its king, Abdi-Tirshi, sworn loyalty to the pharaoh of Egypt. Abdi-Tirshi is the only Canaanite ruler referred to as "king" in those documents. Hazor is also mentioned in 18th century BCE documents found in Mari on the Tigris River.

The fortified city of Hazor (19th 13th centuries BC) comprised both the upper tel (acropolis) and the lower tel (lower city).In the Bible Hazor is described as "the head of all those kingdoms." (Joshua 11:10)

Hazor was totally destroyed by fire at the end of the Late Bronze Age (around 1200 BC).

The conflagration is mentioned in the Bible, emphasizing the complete destruction of Hazor during the conquest of Canaan by the Israelites(Joshua 11:13): "But as for the cities that stood still in their strength, Israel burned none of them, save Hazor only; that did Joshua burn. "A royal city was founded on the upper tel in the 10th century BCE, during King Solomon's reign (1 Kings 9:15):" And this is the reason of the levy which king Solomon raised; for to build the house of the Lord, and his own house, and the Millo, and the wall of Jerusalem, and Hazor, and Megiddo, and Gezer. "The fortification systems and administration buildings are identical to those found at Megiddo and Gezer.

In the 9th century BCE, during the rule of King Ahab, Hazor became a royal city. A new citadel measuring 25 x 21 m. with two-meter thick walls was erected in the western part of the city.

In the 8th century BCE Hazor lost its importance and declined. It was conquered by Tiglath-Pileser III of Assyria in 732 BC. (2 Kings 15:29): "In the days of Pekah king of Israel came Tiglath Pileser king of Assyria, and took Iyon, and Abel Beth Maachah, and Yanoah, and Kedesh, and Hazor, and Gilead, and Galilee, all the land of Naphtali, and carried them captive to Assyria."

Hazor was declared a World Heritage Site by UNESCO in 2005.