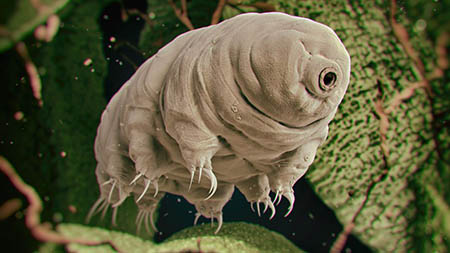 Tardigrades known colloquially as water bears or moss piglets, are a phylum of water-dwelling eight-legged segmented micro-animals.They were first described by the German zoologist Johann August Ephraim Goeze in 1773, who called them little water bears. In 1777, the Italian biologist Lazzaro Spallanzani named them Tardigrada, which means "slow steppers".

They have been found everywhere, from mountaintops to the deep sea and mud volcanoes, and from tropical rainforests to the Antarctic.Tardigrades are among the most resilient animals known, with individual species able to survive extreme conditions - such as exposure to extreme temperatures, extreme pressures (both high and low), air deprivation, radiation, dehydration, and starvation - that would quickly kill most other known forms of life. Tardigrades have survived exposure to outer space. About 1,150 known species form the phylum Tardigrada, a part of the superphylum Ecdysozoa. The group includes fossils dating from 530 million years ago, in the Cambrian period.

Tardigrades are usually about 0.5 mm (0.02 in) long when fully grown. They are short and plump, with four pairs of legs, each ending in claws (usually four to eight) or sucking disks. Tardigrades are prevalent in mosses and lichens and feed on plant cells, algae, and small invertebrates. When collected, they may be viewed under a low-power microscope, making them accessible to students and amateur scientists.

Tardigrades have survived all five mass extinctions. This has given them a plethora of survival characteristics, including the ability to survive situations that would be fatal to almost all other animals .

The lifespan of tardigrades ranges from 3-4 months for some species, up to 2 years for other species, not counting their time in dormant states.


High temperatures due to global warming will be dramatic even for tardigrades   Science Daily - January 16, 2020
A research group has just shown that tardigrades are very vulnerable to long-term high temperature exposures. The tiny animals, in their desiccated state, are best known for their extraordinary tolerance to extreme environments.


Adorable Tardigrades Have a Surprising, Fatal Weakness   Live Science - January 16, 2020
Tardigrades are well-loved among science enthusiasts for their oddly adorable appearance. They have plump bodies and four sets of stubby legs. This cuteness has earned tardigrades the nicknames "water bears" and "moss piglets." Most species measure less than 0.02 inches (0.5 millimeters) in length.

They're also survivors. Tardigrades can handle being frozen, dried out, deprived of oxygen and blasted with radiation - they've even survived trips into the vacuum of space. The critters do this by going into what's called a "tun" state. They draw in their limbs and contract their bodies, suspending their metabolism and essentially entering a state of suspended animation. There may even be tardigrades in this tun state on the moon right now, after a crash landing by an Israeli lunar probe likely sent some specimens scattering. Previous research found that tardigrades could even survive being boiled at up to 303.8 F (151 C) for an hour. But no one had studied how tardigrades handle heat for longer periods.


Tardigrades: We're now polluting the moon with near indestructible little creatures   PhysOrg - August 10, 2019
An Israeli spacecraft called Beresheet almost made it to the moon in April. It took a selfie with the lunar surface in the background, but then lost contact with Earth and presumably crashed onto the lunar surface. Now it's been revealed that the mission was carrying a cargo of dehydrated microscopic lifeforms known as tardigrades.


Thousands of Tardigrades Stranded on the Moon After Lunar Lander Crash   Live Science - August 7, 2019
When you look up at the moon, there may now be a few thousand water bears looking back at you. The Israeli spacecraft Beresheet crashed into the moon during a failed landing attempt on April 11. In doing so, it may have strewn the lunar surface with thousands of dehydrated tardigrades.