We seek to regain our psychic abilities, or the have our powers restored, to see beyond and manifest freely. For most, the process involves healing to see clearly through the maze of information the brain processes from the moment we enter the physical, until we leave, when clarity comes to some, but not all.

We look to prophets and prophecies to peer into the future and foretell what is to happen. There have always been famous seers in the past, present, and perhaps those sending us messages from a future/parallel timeline running simultaneously with our program. It is through their visions that one can piece together the patterns of our reality and where they are all going. To that end we are programmed to question, quest and find the truth. The program has always created prophets and magicians (wizards) to invoke that part of our soul experience which knows this is all illusion. We visit psychics, mediums, shaman, tribal elders, gurus, renown teachers, to gain insights. This propels us in the 21st century as we sense a movement of consciousness that is peeking sending us plummeting into truth and reality at Zero Point.

Thursdays July 5, 2007, the History Channel aired "Decoding the Past - Doomsday 2012: The End of Days" which mentioned Sibly at Delphi, who allegedly is one of the ancient prophets who accurately predicted many important events, far into the future, including 2012. Many people believed her visions were 'a gas'

The word Sibyl comes (via Latin) from the Greek word Sibylla, meaning Prophetess. The earlier oracular seeresses known as the sibyls of antiquity, "who admittedly are known only through legend" prophesied at certain holy sites, probably all of pre-Indo-European origin, under the divine influence of a deity, originally one of the chthonic earth-goddesses. Later in antiquity, sibyls wandered from place to place.

Homer seems to have been unaware of a Sibyl. "Frenzied women from whose lips the god speaks are recorded very much earlier in the Near East, as in Mari in the second millennium and in Assyria in the first millennium".

The first Greek writer, so far as we know, who mentions a sibyl is Heraclitus, in the fifth century BC:

'The Sibyl, with frenzied mouth uttering things not to be laughed at, unadorned and unperfumed, yet reaches to a thousand years with her voice by aid of the god.' (Heraclitus, fragment 12)

Until the literary elaborations of Roman writers, sibyls are not identified by a personal name, but by names that refer to the location of their temenos, or shrine.

In Pausanias, Description of Greece, the first Sibyl at Delphi was of great importance in antiquity, and was thought to have been given the name "sibyl" by the Libyans.

Plato speaks of only one Sibyl, but in the course of time the number increased to 9, with a tenth, the Tiburtine Sibyl added by the Romans.

According to Lactantius' Divine Institutions (4th century AD, quoting from a lost work of Varro, 1st century BC) these 10 sibyls were those who follow. Of them, the three most famous sibyls throughout their long career were the Delphic, the Erythraean and the Cumaean. Not all the Sibyls in the following list were securely identified with an oracular shrine, and in the vague and shifting Christian picture there is some overlap. 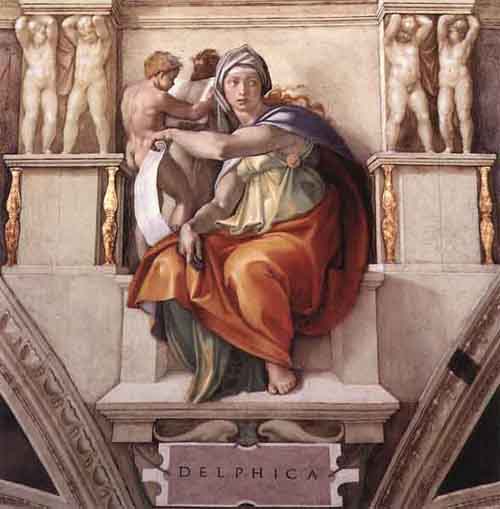 The Delphic Sibyl was a legendary figure who gave prophecies in the sacred precinct of Apollo at Delphi, located on the slopes of Mount Parnassus. The Delphic Sibyl was not involved in the operation of the Delphic Oracle and should be considered distinct from the Pythia, the priestess of Apollo. Pausanias claimed that the Sibyl was "born between man and goddess, daughter of sea monsters and an immortal nymph".

Others said she was sister or daughter to Apollo. Still others claimed the Sibyl received her powers from Gaia originally, who passed the oracle to Themis, who passed it to Phoebe. The Delphic Sibyl has sometimes been confused with the Pythia, who gave prophecies at the Delphic Oracle. The two are not identical, and should be treated as separate figures.