The Sumerians are perhaps remembered most for their many inventions. Many authorities credit them with the invention of the wheel and the potter's wheel. Their cuneiform writing system was the first we have evidence of (with the possible exception of the highly controversial Old European Script), pre-dating Egyptian hieroglyphics by at least seventy five years.

They were among the first formal astronomers.

They came up with the concept of dividing the hour into 60 minutes and the minute into 60 seconds.

They may have invented military formations.

The Sumerians ushered in the age of intensive agriculturalism in Ancient Mesopotamia. Einkorn and Emmer wheat, barley, sheep (starting as mouflon) and cattle (starting as aurochs) were foremost among the species cultivated and raised for the first time on a grand scale. These inventions and innovations easily place the Sumerians among the most creative cultures in human pre-history and history. Sumerian scientific achievements were important to the modern world.


The Sumerians had three main types of boats:

- wooden-oared ships, sometimes pulled upstream by people and animals walking along the nearby banks.


Other examples of Sumerian technology include

- boots and sandals (footwear) - evidence exists for the use of leather by the ancient Sumerians as far back as 6000 BC. Preserved specimens of leather dating to 5000 BC have been found. Egyptian stone carvings of about the same date show leather workers. Egyptian leather sandals more than 3,300 years old and an Egyptian queen's funeral tent of gazelle hides made in 1100 BC are in museums.

- Many of the constellations were mapped by the Sumerians

- Sumerians developed a complex system of sewers and flush toilets to rid cities of waste and unhealthy affects of swamps. 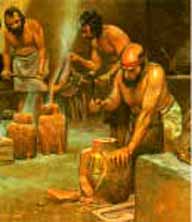