Enkidu is a central figure in the Ancient Mesopotamian Epic of Gilgamesh. Enkidu was first created by Anu, the sky god, to rid Gilgamesh of his arrogance. In the story he is a wild man, a Tarzan figure, raised by animals and ignorant of human society until he is bedded by Shamhat. Thereafter a series of interactions with humans and human ways bring him closer to civilization, culminating in a wrestling match with Gilgamesh, king of Uruk. Enkidu embodies the wild or natural world, and though equal to Gilgamesh in strength and bearing, acts in some ways as an antithesis to the cultured, urban-bred warrior-king. Enkidu then becomes the king's constant companion and deeply beloved friend, accompanying him on adventures until he is stricken ill. The deep, tragic loss of Enkidu profoundly inspires in Gilgamesh a quest to escape death by obtaining godly immortality. Older sources sometimes transliterate his name as Enkimdu, Eabani, or Enkita. Enkidu is a modern variant. 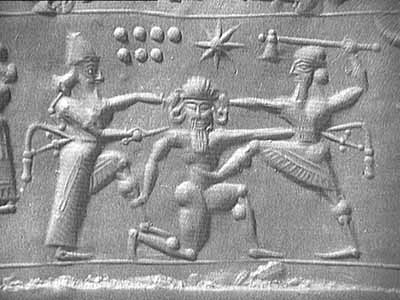 Enkidu assists Gilgamesh in defeating and killing Humbaba, the guardian monster of the Cedar Forest. Afterwards, he again assists Gilgamesh in slaying Gugalanna the Bull of Heaven, which the gods have sent to kill Gilgamesh as a reprisal for spurning the goddess Ishtar's affections while enumerating the misfortunes that befell her former lovers. Ishtar demands that the pair pay for the bull's destruction. Shamash argues to the other gods to spare both of them, but could only save Gilgamesh. The gods pass judgment that Enkidu had no justification for fighting the Bull of Heaven and was interfering with their will. Enkidu then is overcome by a severe illness. Near death, he has visions of a gloomy afterlife, and curses the trapper and Shamhat for civilizing him. He retracts his curse on Shamhat, however, after Shamash scolds him, reminding him that it was Shamhat who taught him the pleasures of civilization, and ultimately, brought him to ">Gilgamesh - a Sumerian Demi-God.

Gilgamesh mourns over the body of Enkidu for several desperate days. In a vivid line repeated in the epic, Gilgamesh only allows his friend to be buried after a maggot falls out of the corpse's nose. Gilgamesh's close observation of rigor mortis and the slow decomposition of Enkidu's body provides the hero with the impetus for his quest for eternal life, and his visit to Utnapishtim.

There is another non-canonical tablet in which Enkidu journeys into the underworld, but many scholars consider the tablet to be a sequel or add-on to the original epic.

Ngeshtin-ana is a minor goddess in Sumerian mythology, the so-called "heavenly grape-vine". The sister of Dumuzi and consort of Ningisida, she is involved in the account of Dumuzi trying to escape his fate at the hands of Inana and Ereshkigal. In her house he is changed into a gazelle before being caught and transported to the underworld.

She is the daughter of Enki and Ninhursag.

After her death, she became the goddess of wine and cold seasons. She is a divine poet and interpreter of dreams.

In Mesopotamian mythology, Gugalanna (lit. "The Great Bull of Heaven"was a Sumerian deity as well as a constellation known today as Taurus, one of the twelve signs of the Zodiac. Gugalanna was the first husband of the Goddess Ereshkigal, the Goddess of the Realm of the Dead, a gloomy place devoid of light, who was dispatched by Inanna to punish Gilgamesh for his sins. Gugalanna was sent by the gods to take retribution upon Gilgamesh for rejecting the sexual advances of the goddess Inanna. Gugalanna, whose feet made the earth shake, was slain and dismembered by Gilgamesh and Enkidu. Inanna, from the heights of the city walls looked down, and Enkidu took the haunches of the bull shaking them at the goddess, threatening he would do the same to her if he could catch her too. For this impiety, Enkidu later dies.

It was to share the sorrow with her sister that Inanna later descends to the Underworld.

Taurus was the constellation of the Northern Hemisphere Spring Equinox from about 3,200 BCE. It marked the start of the agricultural year with the New Year Akitu festival an important date in Mespotamian religion. The "death" of Gugalanna, represents the obscuring disappearance of this constellation as a result of the light of the sun, with whom Gilgamesh was identified.

In the time in which this myth was composed, the New Year Festival, or Akitu, at the Spring Equinox, due to the Precession of the Equinoxes did not occur in Aries, but in Taurus. At this time of the year, Taurus would have disappeared as it was obscured by the sun.

In Akkadian mythology Humbaba (Assyrian spelling) or Huwawa (Sumerian spelling), also Humbaba the Terrible was a monstrous giant of immemorial age raised by Utu, the Sun. Humbaba was the guardian of the Cedar Forest, where the gods lived, by the will of the god Enlil, who assigned Humbaba as a terror to human beings. He is the brother of Pazuzu and Enki and son of Hanbi.