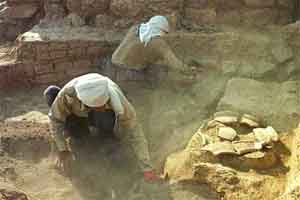 Iraqi archaeologists are striving to bring to light what they describe as Mesopotamia's largest "city of graves," where the Sumerians buried their dead nearly 5,000 years ago.

The scientists are stunned by the size of cemetery and say much more work needs to be done to determine what role it played in ancient times. Remote and desolate, the site was long the target of grave robbers who the scientists say pilfered gold ornaments, cylinder seals made of precious stones and statuettes. Ancient Iraqis usually buried their dead with their most valued possessions.

Chief archaeologist Donny Youkhanna could not say how many artifacts were stolen, nor estimate their significance, "but the damage is certainly big." When he started excavations with 40 diggers last year he brought along armed guards.

Previously, he said, few dared to approach the ancient mound due to the large number of scorpions that lived among the graves, which prompted the locals to name it Umm al-Ajarib or "Mother of Scorpions." Shells, bowls, beads and handsome earthenware and statues dot small lanes in the cemetery situated 250 miles south of Baghdad.

Until now, experts had designated a cemetery at Eridu in southern Iraq as the largest Sumerian burial ground. Umm al-Ajarib is many times larger. The whole site is about two square miles with the cemetery occupying the largest portion, and Youkhanna said it might hold hundreds of thousands of graves. A better estimate will be available once the diggers remove debris and count the graves in a square they have targeted.

The Sumerian civilization appeared in southern Mesopotamia as early as the 5th millennium B.C. By 3000 B.C., Sumer had developed considerable power based on irrigated agriculture, fine arts and a special writing system known as cuneiform, probably the earliest ever in man's history.

Artifacts gathered from the temple so far, though significant, do not shed enough light. Among them is a stone vessel with an inscription in cuneiform, magnificent ivory cylinder seals, goblets, conical bowls and spouted jars.