The Sumerians ushered in the age of intensive agriculture and irrigation. Emmer wheat, barley, sheep (starting as mouflon), and cattle (starting as aurochs) were foremost among the species cultivated and raised for the first time on a grand scale.

By 5000 BC the Sumerians had developed core agricultural techniques including large-scale intensive cultivation of land, mono-cropping, organized irrigation, and the use of a specialized labour force, particularly along the waterway now known as the Shatt al-Arab, from its Persian Gulf delta to the confluence of the Tigris and Euphrates. The surplus of storable food created by this economy allowed the population to settle in one place instead of migrating after crops and grazing land. It also allowed for a much greater population density, and in turn required an extensive labor force and division of labor. This organization led to the development of writing (ca. 3500 BC).

The Sumerians adopted an agricultural mode of life. In the early Sumerian period (i.e. Uruk), the primitive pictograms suggest that "The sheep, goat, ox and probably ass had been domesticated, the ox being used for draught, and woollen clothing as well as rugs were made from the wool or hair of the two first. Alongside the house was an enclosed garden planted with trees and other plants ; wheat and probably other cereals were sown in the fields, and the shaduf was already employed for the purpose of irrigation. Plants were also grown in pots or vases."

The Sumerians practiced the same irrigation techniques as those used in Egypt. American anthropologist Robert McCormick Adams says that irrigation development was associated with urbanization, and that 89% of the population lived in the cities.

They grew barley, chickpeas, lentils, wheat, dates, onions, garlic, lettuce, leeks and mustard. They also raised cattle, sheep, goats, and pigs. They used oxen as their primary beasts of burden and donkeys or equids as their primary transport animal. Sumerians caught many fish and hunted fowl and gazelle.

Sumerian agriculture depended heavily on irrigation. The irrigation was accomplished by the use of shadufs, canals, channels, dykes, weirs, and reservoirs. The frequent violent floods of the Tigris, and less so, of the Euphrates, meant that canals required frequent repair and continual removal of silt, and survey markers and boundary stones continually replaced. The government required individuals to work on the canals in a corvee, although the rich were able to exempt themselves.

After the flood season and after the Spring Equinox and the Akitu or New Year Festival, using the canals, farmers would flood their fields and then drain the water. Next they let oxen stomp the ground and kill weeds. They then dragged the fields with pickaxes. After drying, they plowed, harrowed, and raked the ground three times, and pulverized it with a mattock, before planting seed. Unfortunately the high evaporation rate resulted in a gradual increase in the salinity of the fields. By the Ur III period, farmers had switched from wheat to the more salt-tolerant barley as their principal crop.

Sumerians harvested during the spring in three-person teams consisting of a reaper, a binder, and a sheaf handler. The farmers would use threshing wagons to separate the cereal heads from the stalks and then use threshing sleds to disengage the grain. They then winnowed the grain/chaff mixture.

Using the canals, farmers would flood their fields and then drain the water. Next they let oxen stomp the ground and kill weeds. They then dragged the fields with pickaxes. After drying, they plowed, harrowed, raked thrice, and pulverized with a mattock. Sumerians harvested during the dry fall season in three-person teams consisting of a reaper, a binder, and a sheaf arranger. The farmers would use threshing wagons to separate the cereal heads from the stalks and then use threshing sleds to disengage the grain. They then winnowed the grain/chaff mixture.

Early in Sumerian civilization, eighty to ninety percent of those who farmed did so on land they considered theirs rather than communal property. Here, too, the Sumerians were expressing a trend that was common among others. Another individual effort was commerce, and with a growth in commerce the Sumerians had begun using money, which made individual wealth more easily measured and stored. Commerce required initiative, imagination, an ability to get along with people and luck, and, of course, some merchants were more successful than were others. Farming took stamina, strength, good health, good luck and organization. And some farmers were more successful than were other farmers.

Those farmers who failed to harvest enough to keep themselves in food and seed borrowed from those who had wealth in surplus. Those who borrowed hoped that their next harvest would give them the surplus they needed to repay their loan. But if the next harvest were also inadequate, to meet their obligations they might be forced to surrender their lands to the lender or to work for him. When Sumerians lost their land, they or their descendants might become sharecroppers: working the lands of successful landowners in exchange for giving the landowners a good portion of the crops they grew.

Accompanying divisions in wealth was a division in power, and power among the Sumerians passed to an elite. Sumerian priests who had once worked the fields alongside others, soon were separated from commoners. A corporation run by priests became the greatest landowners among the Sumerians. The priests hired the poor to work their land and claimed that land was really owned by the gods. Priests had become skilled as scribes, and in some cities they sat with the city's council of elders. These councils wielded great influence, sometimes in conflict with a city's king. 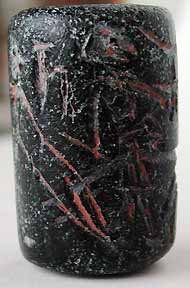 Cylinder Seal Showing God of Agriculture and Two Others Plowing