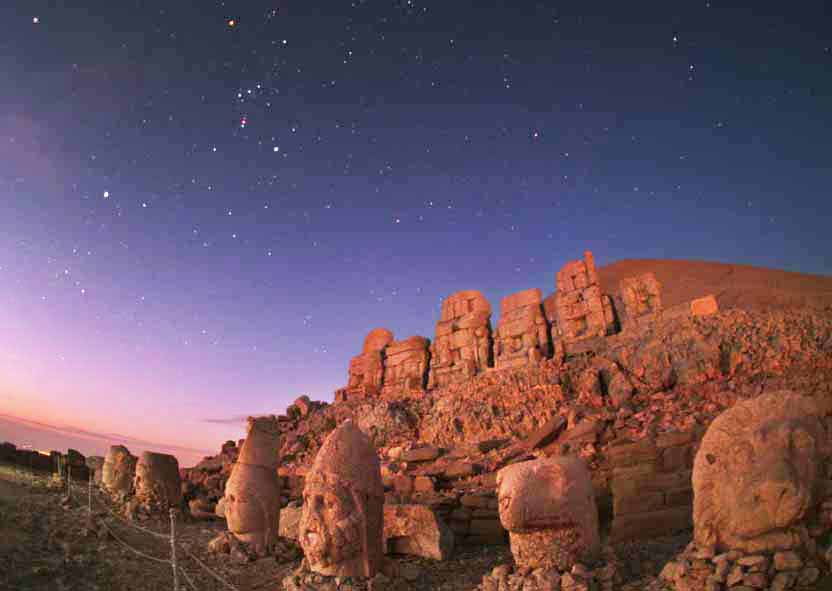 What's that in front of Orion? Forty kilometers north of Kahta, Turkey, lies Mount Nemrut, a mountain adorned with the fragments of vast statues built over 2000 years ago. The stone sculptures once stood nearly 10 meters high and depicted lions, eagles, various ancient gods, and King Antiochus I Theos, who ruled Commagene from 86 BC to 38 BC. Ruins of the bodies of several sitting figures are visible on the hill above, illuminated by moonlight. Zeus' head can be found near the above image's center, while the king's head is seen next closest to the horizon. Visible far in the distance in this image, taken three months ago, is the familiar constellation of Orion. The red patch just below Orion's belt is the Orion Nebula, while the bright star to the left of Orion is Sirius. On the far left, a red and brightening horizon announces that the Sun is beginning to rise.

Mount Nemrut lies 40km north of Kahta, near Adőyaman in the Taurus Mountains. In 62 BC, King Antiochus I Theos of Commagene built on the mountain top a tomb-sanctuary flanked by huge statues (8-9 meters high) of himself, two lions, two eagles and various Greek, Armenian and Persian gods, such as Hercules-Vahagn, Zeus-Aramazd or Oromasdes (associated with the Persian god Ahura Mazda the god of Zoroaster), Tyche, and Apollo-Mithras. These statues were once seated, with names of each god inscribed on them. The heads of the statues are now scattered throughout the site; the pattern of damage to the heads (notably to noses) suggests that they were deliberately damaged because of belief in iconoclasm. 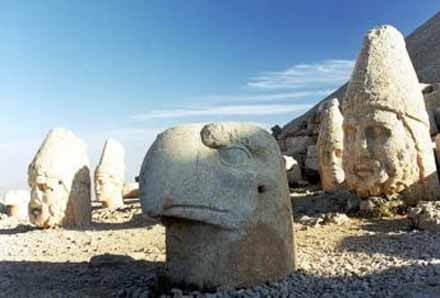