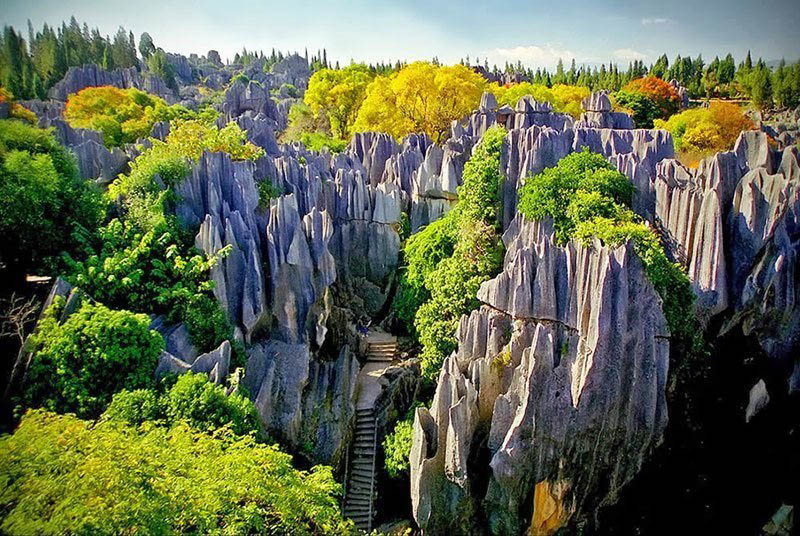 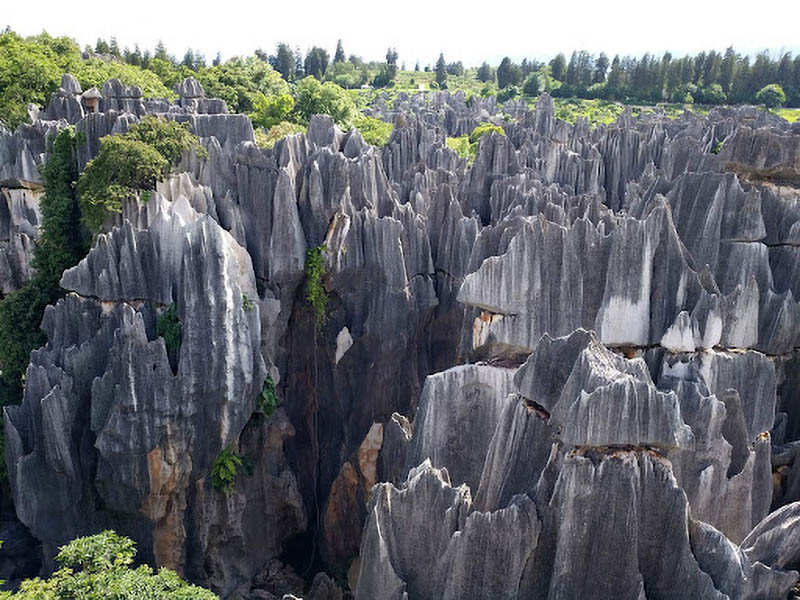 The Stone Forest or Shilin s a notable set of limestone formations about 500 km located in Shilin Yi Autonomous County, Yunnan Province, People's Republic of China, near Shilin approximately 90 km (56 mi) from the provincial capital Kunming. The tall rocks seem to arise from the ground in a manner somewhat reminiscent of stalagmites, or with many looking like petrified trees, thereby creating the illusion of a forest made of stone. Since 2007, two parts of the site, the Naigu Stone Forest have been UNESCO World Heritage Sites as part of the South China Karst The site is classified as a AAAAA-class tourist site.

\The Stone Forest is situated in the Lunan Yu Autonomous County 126 kilometers southeast of Kunming. A typical karst formation, the Stone Forest covers an area of more than three hundred square kilometres. Kunming is nicknamed City of Spring due to the fact that it is covered all year round with the rich verdure of trees and plants. Endowed with a pleasant climate, the city's 15,000 square kilometres of land is adorned with more than 400 kinds of flowers.

The Stone Forest dates to the Ming Dynasty and is consider by some to be the First Wonder of the World.

Scientific research has shown that what is now the Stone Forest was 270 million years ago an immense expanse of water with a vast stretch of limestone sediment formed over the years on the seafloor. As a result of the crustal movement, the seabed rose gradually and a large piece of land thus came into being.

Exposed to rains and winds, eroded by the elements, the limestone ranges were shaped by time. About 200 million years ago numerous stone peaks, pillars, and stalagmites rose abruptly from the ground and towered into the sky, extending now as far as the eye can see, looking like a vast forest of stone.

Major Stone Forest, Minor Stone - Forest and Naigu Stone Forest, all of which feature stones in various formations. Animals, plants, and even human figures can be found here. Some are elegant, some are rugged, and each is lifelike with its own distinguishing characteristics.

Strange Wind Cave - composed of Penfeng Cave, Hongxi Spring and an underground river. From August to November, gales lasting two to three minutes sweep out of the cave every 30 minutes.

Long Lake is a karsts lake that is three kilometers (two miles) long but only 300 meters (zero point two miles) wide. The lake features underwater stalagmites and stalactites and a small island in the center of the water.