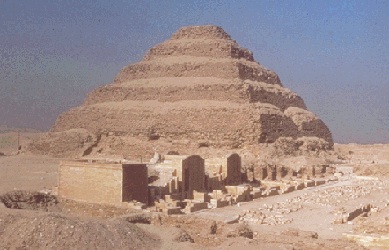 The first tombs of the pharaohs were large, unimpressive, bunker affairs called mastabas. They were made from sun dried mud brick and most have long since crumbled to dust. This all changed around 2630 BC with the erection of the step pyramid. It was made for the pharaoh, Djoser and began as a normal mastaba, but was subsequently enlarged by adding one mastaba on top of another until it consisted of six terraces some 200ft (60 meters) high. The surface was originally encased in smooth white limestone which must have caught the sun light and reflected its rays.

Across the Great Court of the Pyramid Complex of Djoser (Zoser) (2667 - 2648 BC), the second king of the 3rd Dynasty, stands the Step Pyramid. It is believed to have been created by one man, Imhotep. He has been called Doctor, Sage, Architect, Astronomer and High Priest. The Greeks worshipped Imhotep as Aesclepius, the God of Healing. Imhotep is also credited as a founder of the Egyptian, and Masonic, mystery traditions. 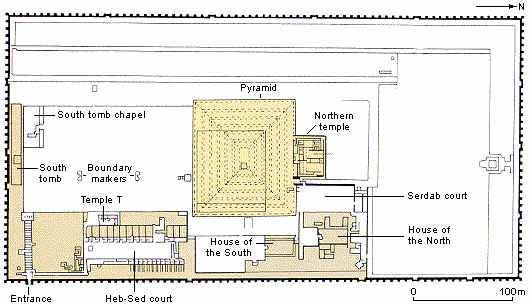 During an excavation in 1924-26, a pedestal of a statue of Djoser (Zoser) was found. This complex represents the first major work in stone. That is, unless there are other works that have yet to be found.

On the Pyramid, most of the outer casing is gone. In some places the core masonry has disappeared as well. It is obvious there were different stages of construction. The eastern side gives the best picture, but it can be seen from the northern and southern side as well.

The original structure was an underground burial chamber. This chamber was rare in that it was square; most mastabas were rectangular. The royal tomb is 28m underground with a vertical shaft leading to it. The entrance was sealed with a 3 ton piece of granite. The face of the mastaba was a fine Tura limestone.

Apparently it was intended for this to be the finishing touches to the building. It was then enlarged all around with ten feet of additional limestone and then again with an extension on the eastern side. The extension was twenty-five feet of limestone to make the mastaba rectangular. Again, it was enlarged and a two-tiered structure was made. A series of corridors and a tomb chamber was dug. Some of the chambers are lined with blue tiles. Some scholars think this tomb was intended for a member of Djoser's (Zoser's) family, but not for him. The only other site that has similar tiling is in the South Tomb which is located in the Djoser (Zoser) complex as well.

The statue of Djoser (Zoser) that was found by excavators, was found in the Tomb Chamber. This statue was damaged but still intact. It is located in the Cairo Museum. The Tomb Chamber has a replica of the statue in this blue-tiled room. It can still be seen through the viewing slit that is at the entrance. The chamber is closed to the public. Scholars believed that the roof of the chamber could give way. The chamber walls have inscriptions that show beyond any doubt that this is indeed a burial chamber. It also contains offering rooms and most of the other features that were often found in both earlier and later tombs.

The Mortuary Temple is just north of the pyramid and is in total ruin. On the southern wall back across the Great Court from the pyramid are carved cobra heads or uraei. The cobra head is an often seen symbol in Egypt. It was once a symbol of the north.

The Southern Tomb is located just outside of the southern wall. Steps lead up the wall to the other tombs and monuments outside the walls. On the left side of the stairs, there is a large hole. At the bottom of the hole, is an entrance that leads to an amazing set of chambers. This Southern Tomb is closed to the public. These chambers are also lined with the blue tiles that are found in the burial chambers in the Step Pyramid. The inscriptions found in these chambers are remarkable. They are perfectly executed and pure in line. 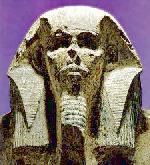 Djoser's Step Pyramid is generally considered the first tomb in Egypt to be built entirely of stone anywhere in the world.

As its name suggests, it is a series of six levels of stone decreasing in size as they ascend to about 200 feet/60 meters in height. Until this time, mastabas have been the principal form of tomb architecture.

A mastaba (Arabic for "bench") is a low rectangular structure which was built over a shaft which descended to the burial location.

The Step Pyramid originally began as a mastaba, and it may have been visualized as a series of mastaba shapes, decreasing in size, stacked one on top of another. Whatever the origin, it creates an impressive geometrical form rising from the floor of the desert.

In the center is a large mastaba. Around this are six terraces of descending sizes, one built on top of the other. Nearby were other buildings whose function related to the cult of the dead.

The Jubilee Court is located to the southeast of the Step Pyramid. On the west side of the court (pictured here) are "dummy" buildings which replicate the shape of canonical shrines of Upper Egypt. On the east side of the court are buildings which replicate the shrines of Lower Egypt. Note the base of a double throne kiosk for the king (as ruler of the two parts of Egypt) in the left center (south end of court). 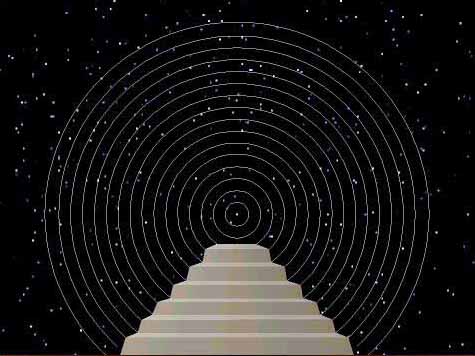 The Pharaoh's stairway to the Heavens. This is a simulated view looking north. The pole star is in the center of all of the rings. Each band or layer of the pyramid represented five degrees of the dome of the sky (with the exception of the base layer due to other considerations). The circular pathways of the stars intersect with the pyramid as they rotate in the sky and become infused into the quadrangular tiers of the structure. This provides an insight into the esoteric meaning of 'squaring the circle': the circle is celestial and the square is terrestrial.