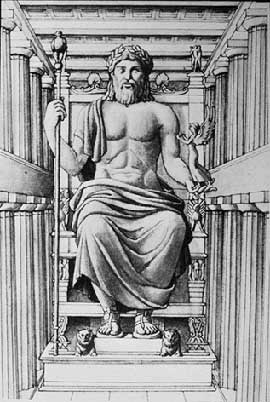 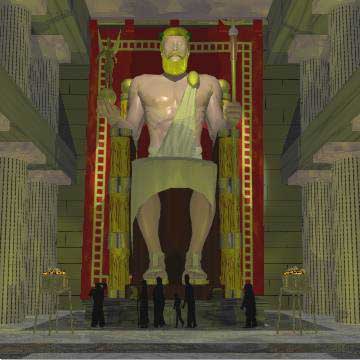 The Statue of Zeus at Olympia is one of the classical Seven Wonders of the Ancient World. It was carved by the famed Classical sculptor Phidias (5th century BC) circa 435 BC in Olympia, Greece.

The seated statue occupied the whole width of the aisle of the temple that was built to house it. According to the 1989 World Book, it was 40 feet (12 meters) tall. "It seems that if Zeus were to stand up," the geographer Strabo noted early in the 1st century BC, "he would unroof the temple."

Zeus was carved from ivory (technically the ivory was soaked in a liquid that made it softer, so it was probably both carved and shaped as necessary) then covered with gold plating (thus chryselephantine) and was seated on a magnificent throne of cedarwood, inlaid with ivory, gold, ebony, and precious stones.

In Zeus' right hand there was a small statue of Nike, the goddess of victory, and in his left hand, a shining sceptre on which an eagle perched. Visitors like the Roman general Aemilius Paulus, the victor over Macedon, were moved to awe by the godlike majesty and splendor that Phidias had captured.

The circumstances of its eventual destruction are a source of debate: some scholars argue that it perished with the temple in the 5th century AD, others argue that it was carried off to Constantinople, where it was destroyed in the great fire of the Lauseion (Schobel 1965).

According to Lucian of Samosata in the later second century, "they have laid hands on your person at Olympia, my lord High-Thunderer, and you had not the energy to wake the dogs or call in the neighbors; surely they might have come to the rescue and caught the fellows before they had finished packing up the swag".

Perhaps the greatest discovery in terms of finding out about this wonder came in 1958 with the excavation of the workshop used to create the statue. This has led archaeologists to be able to re-create the technique used to make the great work.