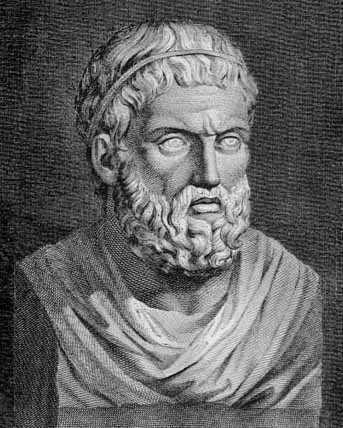 He was also a general for the Athenian Empire in the Peloponnesian Wars, and during his service he led the battle against the Peloponnesian Island of Samos. He is sometimes known as the Attic Bee for the "sweetness of his productions."

Sophocles is the second, chronologically, of the three great Greek tragedians; he was several decades younger than Aeschylus and a decade or so older than Euripides, and was often in competition with both in dramatic contests.

The year of his birth is contested, with 488 BCE, 495 BCE, and 496 BCE each having advocates. 495 BCE however is preferred by most eminent historians. He is most noted for his prolific playwriting. He wrote 123 plays; in the dramatic competitions of the Festival of Dionysus (where each submission by one author consisted of four plays), he won more first prizes (around 20) than any other playwright, and there is no record of his ever having ranked below second place.

Many scholars, including Aristotle, considered Sophocles to be the greatest playwright in ancient Greek theatre. However, of the hundreds of works he produced in his lifetime, only seven tragedies survive in their complete forms, along with around half of a satire play.

(Sixty to 90 others exist in fragments). The most famous of his surviving works are his famous three Theban plays, the tragedies surrounding Oedipus and Antigone.

Sophocles was born about a mile northwest of Athens in the rural deme (small community) of Colonus Hippius in Attica.

Some historians speculate that Sophilos was a carpenter, smith, or swordmaker; the majority believe he ran some kind of armaments business or factory that employed people of many occupations.

As a boy, Sophocles was educated in the arts and at a palaestra. He won awards in wrestling and music, and was said to be graceful and handsome.

At the age of sixteen, he was chosen to lead the chorus of naked boys (paean) at the Athenian celebration of the victory against the Persians at the Battle of Salamis in 480 BCE.

In 440, Sophocles was elected as one of the ten strategoi (military commanders) of Athens.