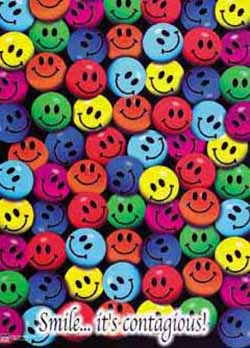 A warm, friendly, excepting smile can go a long way and is also part of the healing process. A smile is generally an expression of positive emotions, which can uplift a soul, who in turn passes that energy to another.

It is also about body language. It is a means of understanding something unspoken which can be as simple as, a friendly greeting.

The frequency of a smile received can vary and quickly move into your intuitive side the right brain. What does that smile mean? Okay, I got it! Now you react to the smile perhaps returning it with a smile. Laughter is a related healing tool and is also contagious as it is a high frequency emotion.

Psychologists find smiling really can make people happier   Science Daily - April 12, 2019
A team of psychologists combined data from 138 studies testing more than 11,000 participants and found that facial expressions have a small impact on our feelings.


Why smiles (and frowns) are contagious   Science Daily - February 11, 2016
Smile! It makes everyone in the room feel better because they, consciously or unconsciously, are smiling with you. Growing evidence shows that an instinct for facial mimicry allows us to empathize with and even experience other people's feelings. If we can't mirror another person's face, it limits our ability to read and properly react to their expressions.


Researchers measure the value of a smile   PhysOrg - May 10, 2011
Researchers at Bangor University have placed an economic value on a smile, demonstrating scientifically the effect that a genuine smile can have on our decision-making. The psychologists call this social information and say that it has more of an effect than you may imagine. The researchers examined people's responses to two types of smiles: genuine and polite. The feature that distinguishes these smiles is the presence of laugh lines, the tiny wrinkles that appear at the corners of the eyes during genuine but not polite smiles. The authors designed an experiment in which students played a game against computerized 'opponents' with either higher or lower chances of winning money and who smiled either genuinely or politely. In the later stages of the 'game', the researchers measured people's preferences by asking them to choose their opponents. The results allowed the researchers to determine how valuable participants found each type of smile.

World Smile Day is celebrated on the first Friday in the month of October every year. The idea of was coined and initiated by Harvey Ball, a commercial artist from Worcester, Massachusetts. He is known to have created the Smiley Face in 1963.[1] The World's first World Smile Day was held in the year 1999 and has been held annually since.