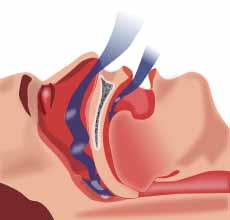 Sleep apnea (or sleep apnoea in British English) is a sleep disorder characterized by abnormal pauses in breathing or instances of abnormally low breathing, during sleep. Each pause in breathing, called an apnea, can last from a few seconds to minutes, and may occur 5 to 30 times or more an hour. Similarly, each abnormally low breathing event is called a hypopnea. Sleep apnea is diagnosed with an overnight sleep test called a polysomnogram, or "sleep study".

The first reports in the medical literature of what is now called obstructive sleep apnea date only from 1965, when it was independently described by French and German investigators. However, the clinical picture of this condition has long been recognized as a character trait, without an understanding of the disease process. The term "Pickwickian syndrome" that is sometimes used for the syndrome was coined by the famous early 20th century physician, William Osler, who must have been a reader of Charles Dickens. The description of Joe, "the fat boy" in Dickens's novel The Pickwick Papers, is an accurate clinical picture of an adult with obstructive sleep apnea syndrome.

The early reports of obstructive sleep apnea in the medical literature described individuals who were very severely affected, often presenting with severe hypoxemia, hypercapnia and congestive heart failure. Tracheostomy was the recommended treatment and, though it could be life-saving, postoperative complications in the stoma were frequent in these very obese and short-necked individuals.

The management of obstructive sleep apnea was revolutionized with the introduction of continuous positive airway pressure (CPAP), first described in 1981 by Colin Sullivan and associates in Sydney, Australia. The first models were bulky and noisy, but the design was rapidly improved and by the late 1980s CPAP was widely adopted. The availability of an effective treatment stimulated an aggressive search for affected individuals and led to the establishment of hundreds of specialized clinics dedicated to the diagnosis and treatment of sleep disorders. Though many types of sleep problems are recognized, the vast majority of patients attending these centers have sleep-disordered breathing.

There are three forms of sleep apnea: central (CSA), obstructive (OSA), and complex or mixed sleep apnea (i.e., a combination of central and obstructive) constituting 0.4%, 84% and 15% of cases respectively. In CSA, breathing is interrupted by a lack of respiratory effort; in OSA, breathing is interrupted by a physical block to airflow despite respiratory effort and snoring is common.

Regardless of type, an individual with sleep apnea is rarely aware of having difficulty breathing, even upon awakening. Sleep apnea is recognized as a problem by others witnessing the individual during episodes or is suspected because of its effects on the body (sequelae). Symptoms may be present for years (or even decades) without identification, during which time the sufferer may become conditioned to the daytime sleepiness and fatigue associated with significant levels of sleep disturbance.

For mild cases of sleep apnea, a treatment which is a lifestyle change is sleeping on one's side, which can prevent the tongue and palate from falling backwards in the throat and blocking the airway. Another is avoiding alcohol and sleeping pills, which can relax throat muscles, contributing to the collapse of the airway at night.

For moderate to severe sleep apnea, the most common treatment is the use of a continuous positive airway pressure (CPAP) device, which 'splints' the patient's airway open during sleep by means of a flow of pressurized air into the throat. The patient typically wears a plastic facial mask, which is connected by a flexible tube to a small bedside CPAP machine. The CPAP machine generates the required air pressure to keep the patient's airways open during sleep.

Advanced models may warm or humidify the air and monitor the patient's breathing to insure proper treatment. Although CPAP therapy is extremely effective in reducing apneas and less expensive than other treatments, some patients find it extremely uncomfortable. Many patients refuse to continue the therapy or fail to use their CPAP machines on a nightly basis. The CPAP machine assists only inhaling, whereas a BiPAP machine assists with both inhaling and exhaling and is used in more severe cases.

In addition to CPAP, dentists specializing in sleep disorders can prescribe Oral Appliance Therapy (OAT). The oral appliance is a custom-made mouthpiece that shifts the lower jaw forward, opening up the airway. OAT is usually successful in patients with mild to moderate obstructive sleep apnea. OAT is a relatively new treatment option for sleep apnea in the United States, but it is much more common in Canada and Europe. Its use has led to increasing recognition of the importance of upper airway anatomy in the pathophysiology of OSA

CPAP and OAT are generally effective only for obstructive and mixed sleep apnea which have a mechanical rather than a neurological cause.

For patients who do not tolerate or fail nonsurgical measures, surgical treatment to anatomically alter the airway is available. Several levels of obstruction may be addressed, including the nasal passage, throat (pharynx), base of tongue, and facial skeleton. 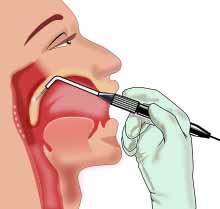 Surgical treatment for obstructive sleep apnea needs to be individualized in order to address all anatomical areas of obstruction. Often, correction of the nasal passages needs to be performed in addition to correction of the oropharynx passage. Septoplasty and turbinate surgery may improve the nasal airway. Tonsillectomy and uvulopalatopharyngoplasty (UPPP or UP3) is available to address pharyngeal obstruction.

Base-of-tongue advancement by means of advancing the genial tubercle of the mandible may help with the lower pharynx. A myriad of other techniques are available, including hyoid bone myotomy and suspension and various radiofrequency technologies. For patients who fail these operations, the facial skeletal may be advanced by means of a technique called maxillomandibular advancement, or two-jaw surgery (upper and lower jaws). Technically, this is accomplished by a surgery similar to orthognathic surgeries addressing an abnormal bite. The surgery involves a Lefort type one osteotomy and bilateral sagittal split mandibular osteotomies.

Other surgery options may attempt to shrink or stiffen excess tissue in the mouth or throat, procedures done at either a doctor's office or a hospital. Small shots or other treatments, sometimes in a series, are used for shrinkage, while the insertion of a small piece of stiff plastic is used in the case of surgery whose goal is to stiffen tissues.

Possibly owing to changes in pulmonary oxygen stores, sleeping on one's side (as opposed to on one's back) has been found to be helpful for central sleep apnea with Cheyne-Stokes respiration (CSA-CSR).

Medications like Acetazolamide lower blood pH and encourage respiration. Low doses of oxygen are also used as a treatment for hypoxia but are discouraged due to side effects.

CPAP is the most consistently safe and effective treatment for obstructive sleep apnea but it is not a cure, and people are less likely to use it in the long term.[28] In contrast, although not well known, surgery is more expensive and can directly treat the causes of sleep apnea: The Stanford Center for Excellence in Sleep Disorders Medicine achieved a 95% cure rate of sleep apnea patients by surgery. Maxillomandibular advancement (MMA) is considered the most effective surgery for sleep apnea patients, because it increases the posterior airway space (PAS). The main benefit of the operation is that the oxygen saturation in the arterial blood increases.

In a study published in 2008, 93.3.% of surgery patients achieved an adequate quality of life based on the Functional Outcomes of Sleep Questionnaire (FOSQ). Surgery led to a significant increase in general productivity, social outcome, activity level, vigilance, intimacy and sex, and the total score postoperatively was P = .0002. Overall risks of MMA surgery are low: The Stanford University Sleep Disorders Center found 4 failures in a series of 177 patients, or about one out of 44 patients.

Several inpatient and outpatient procedures use sedation. Many drugs and agents used during surgery to relieve pain and to depress consciousness remain in the body at low amounts for hours or even days afterwards. In an individual with either central, obstructive or mixed sleep apnea, these low doses may be enough to cause life-threatening irregularities in breathing or collapses in a patient's airways. Use of analgesics and sedatives in these patients postoperatively should therefore be minimized or avoided.

Surgery on the mouth and throat, as well as dental surgery and procedures, can result in postoperative swelling of the lining of the mouth and other areas that affect the airway. Even when the surgical procedure is designed to improve the airway, such as tonsillectomy and adenoidectomy or tongue reduction, swelling may negate some of the effects in the immediate postoperative period. Once the swelling resolves and the palate becomes tightened by postoperative scarring, however, the full benefit of the surgery may be noticed. Individuals with sleep apnea generally require more intensive monitoring after surgery for these reasons.

Sleep apnea patients undergoing any medical treatment must make sure his or her doctor and/or anesthetist are informed about their condition. Alternate and emergency procedures may be necessary to maintain the airway of sleep apnea patients. If an individual suspects he or she may have sleep apnea, communication with their doctor about possible preprocedure screening may be in order.

A 2005 study in the British Medical Journal found that learning and practicing the didgeridoo helped reduce snoring and sleep apnea as well as daytime sleepiness. This appears to work by strengthening muscles in the upper airway, thus reducing their tendency to collapse during sleep.

Flinders sleep experts try new tactic to fight fatigue   PhysOrg - August 28, 2014
In a world-first, sleep experts from Flinders University are attempting to fight fatigue caused by insomnia and obstructive sleep apnea (OSA) by treating the two conditions at the same time. Led by internationally-renowned sleep disorder specialists Professor Doug McEvoy and Professor Leon Lack, the study aims to treat both conditions, providing fresh hope for the thousands of people who experience severe fatigue and daytime sleepiness as a result of suffering both conditions (co-morbidity).