The Legend of the Skull Of Sidon 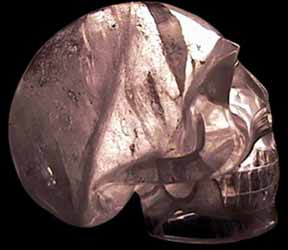 The Skull and Cross bones have long been known to have Masonic connections. It was commonly used as a symbol on Masonic Grave sites in the past. The Skull and Crossbones, Masonic or not point out to us all, our own mortality and eventual death. This image of mortality was believed to figure in Templar ritual. Now while this claim in and of itself seems quite believable, one of the legends of how it came to be is not. It is well known that the order of the Templars were monastic in nature and therefore forbidden to have involvement with women.

The legend of the Skull of Sidon states that a great lady of Maraclea was loved by a Templar who was a Lord of Sidon. She died suddenly. On the night of her burial, he supposedly crept to her grave, dug up her body and violated it. Then a voice from the void bade him return in nine months time for he would find a son.

He returned at the appointed time, opened the grave again and found a head on the leg bones of the skeleton (skull and crossbones). The same voice bade him 'guard it well, for it would be the giver of all good things', and so he carried it away with him.

It became his protecting genius, and he was able to defeat his enemies by merely showing them the magic head. In due course, it passed to the possession of the order.

This tale can be traced back to a twelfth century author named Walter Mapp, although the story at this time is not connected with the Templar Knights. However, at the time of their trials 1307-1314 it was well woven into the Templar legend. In fact it was called upon during the actual trials of the Templars.

Edward Burman in his book Supremely Abominable Crimes tells of an Antonio Sicci, an apostolic notary from Vercelli, Northern Italy. Sicci recounts to the inquisitors the tale of the Lord of Sidon which he claimed he learned while working for the order in the Holy Land. His accusation and recounting of the tale is similar to that quoted in Baigent and Leigh's book.

As ridiculous as this tale seems in modern times, it was easily bought during the period. The inquisitors and theologians would have picked up on the fact that the woman of the piece was Armenian by background. This they would have connected with the Armenian Church and its Paulician sects. The Paulicians and the Bogomils were practitioners of Catharism which the church had all but wiped out during the Albigensian Crusade. Since the church believed the Cathari to be practitioners of the Black Mass and necromancy, the woman's Armenian background would make the story guilty by association.

- The Holy Blood and The Holy Grail