In Greek mythology, the Sirens were three dangerous bird-women, portrayed as seductresses who lured nearby sailors with their enchanting music and voices to shipwreck on the rocky coast of their island. Roman poets placed them on an island called Sirenum scopuli. In some later, rationalized traditions, the literal geography of the "flowery" island of Anthemoessa, or Anthemusa, is fixed: sometimes on Cape Pelorum and at others in the islands known as the Sirenuse, near Paestum, or in Capreae. All such locations were surrounded by cliffs and rocks.

When the Sirens were given a parentage they were considered the daughters of the river god Achelous, fathered upon Terpsichore, Melpomene, Sterope, or Chthon (the Earth; in Euripides' Helen 167, Helen in her anguish calls upon "Winged maidens, daughters of the Earth"). Although they lured mariners, for the Greeks the Sirens in their "meadow starred with flowers" were not sea deities. Roman writers linked the Sirens more closely to the sea, as daughters of Phorcys.

Their number is variously reported as between two and five. In the Odyssey, Homer says nothing of their origin or names, but gives the number of the Sirens as two. Later writers mention both their names and number: some state that there were three, Peisinoe, Aglaope, and Thelxiepeia.

The Sirens of Greek mythology are sometimes portrayed in later folklore as fully aquatic and mermaid-like; the facts that in Spanish, French, Italian, Polish, Romanian and Portuguese the word for mermaid is respectively Sirena, Sirene, Sirena, Syrena, Sirena and Sereia, and that in biology the Sirenia comprise an order of fully aquatic mammals that includes the dugong and manatee, add to the visual confusion, so that Sirens are even represented as mermaids. However, "the sirens, though they sing to mariners, are not sea-maidens," Harrison had cautioned; "they dwell on an island in a flowery meadow." 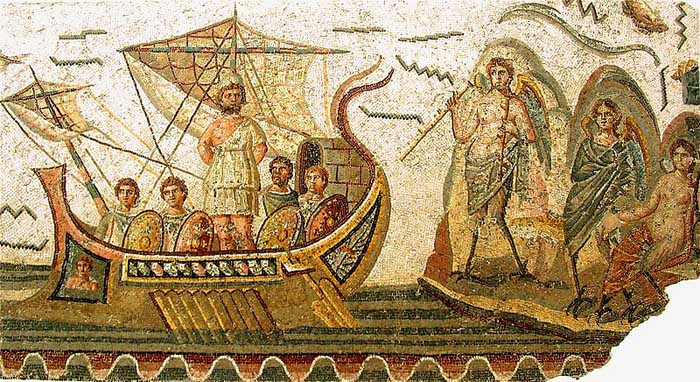 Sirens combine women and birds in various ways. In early Greek art Sirens were represented as birds with large women's heads, bird feathers and scaly feet. Later, they were represented as female figures with the legs of birds, with or without wings, playing a variety of musical instruments, especially harps. The tenth century Byzantine encyclopedia Suda says that from their chests up Sirens had the form of sparrows, below they were women, or, alternatively, that they were little birds with women's faces. Birds were chosen because of their beautiful voices. Later Sirens were sometimes depicted as beautiful women, whose bodies, not only their voices, are seductive.

The first century Roman historian Pliny the Elder discounted Sirens as pure fable, "although Dinon, the father of Clearchus, a celebrated writer, asserts that they exist in India, and that they charm men by their song, and, having first lulled them to sleep, tear them to pieces." In his notebooks Leonardo da Vinci wrote of the Siren, "The siren sings so sweetly that she lulls the mariners to sleep; then she climbs upon the ships and kills the sleeping mariners."

In 1917, Franz Kafka wrote in The Silence of the Sirens, "Now the Sirens have a still more fatal weapon than their song, namely their silence. And though admittedly such a thing never happened, it is still conceivable that someone might possibly have escaped from their singing; but from their silence certainly never."

The so-called "Siren of Canosa" accompanied the deceased among grave goods in a burial and seems to have some psychopomp characteristics, guiding the dead on the after-life journey. The cast terracotta figure bears traces of its original white pigment. The woman bears the feet and the wings and tail of a bird. It is conserved in the National Archaeological Museum of Spain, in Madrid. 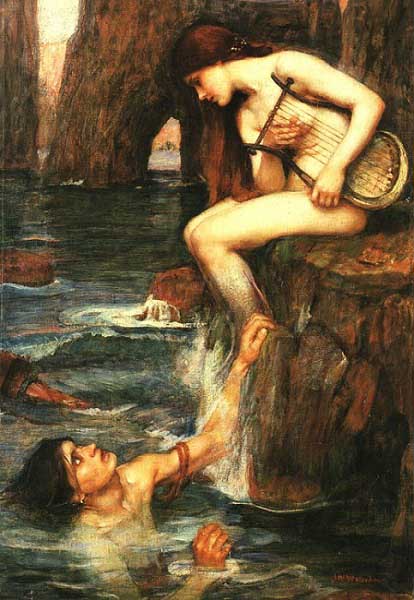 According to Ovid (Metamorphoses V, 551), the Sirens were the companions of young Persephone and were given wings by Demeter to search for Persephone when she was abducted. Their song is continually calling on Persephone. The term "siren song" refers to an appeal that is hard to resist but that, if heeded, will lead to a bad result. Later writers have inferred that the Sirens were anthropophagous, based on Circe's description of them "lolling there in their meadow, round them heaps of corpses rotting away, rags of skin shriveling on their bones." As Jane Ellen Harrison notes of "The Ker as siren:" "It is strange and beautiful that Homer should make the Sirens appeal to the spirit, not to the flesh. For the matter of the siren song is a promise to Odysseus of mantic truths; with a false promise that he will live to tell them, they sing,

Once he hears to his heart's content, sails on, a wiser man. We know all the pains that the Greeks and Trojans once endured on the spreading plain of Troy when the gods willed it so - all that comes to pass on the fertile earth, we know it all.

"They are mantic creatures like the Sphinx with whom they have much in common, knowing both the past and the future," Harrison observed. "Their song takes effect at midday, in a windless calm. The end of that song is death." That the sailors' flesh is rotting away, though, would suggest it has not been eaten. It has been suggested that, with their feathers stolen, their divine nature kept them alive, but unable to provide for their visitors, who starved to death by refusing to leave.

According to Hyginus, sirens were fated to live only until the mortals who heard their songs were able to pass by them.


Ulysses and the Sirens 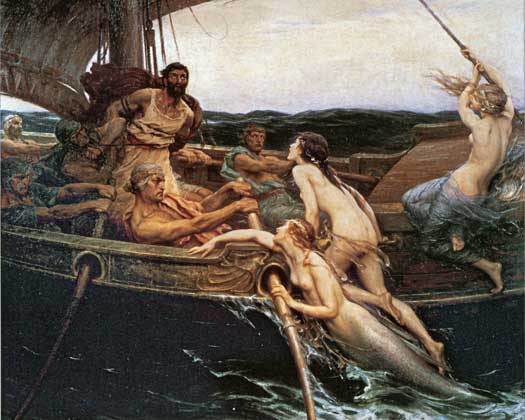 Encounters with the Sirens 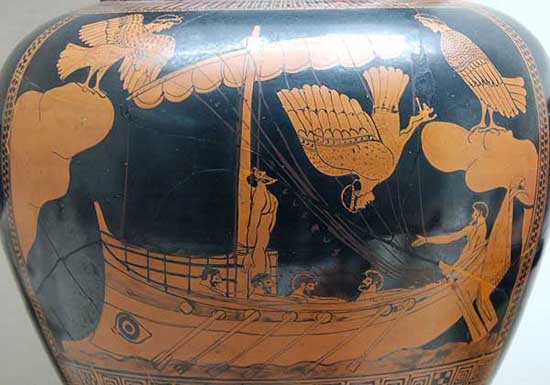 In Argonautica (4.891-919), Jason had been warned by Chiron that Orpheus would be necessary in his journey. When Orpheus heard their voices, he drew out his lyre and played his music more beautifully than they, drowning out their voices. One of the crew, however, the sharp-eared hero Butes, heard the song and leapt into the sea, but he was caught up and carried safely away by the goddess Aphrodite.

Odysseus was curious as to what the Sirens sounded like, so, on Circe's advice, he had all his sailors plug their ears with beeswax and tie him to the mast. He ordered his men to leave him tied tightly to the mast, no matter how much he would beg. When he heard their beautiful song, he ordered the sailors to untie him but they refused. When they had passed out of earshot, Odysseus demonstrated with his frowns to be released.

Some post-Homeric authors state that the Sirens were fated to die if someone heard their singing and escaped them, and that after Odysseus passed by they therefore flung themselves into the water and perished. It is also said that Hera, queen of the gods, persuaded the Sirens to enter a singing contest with the Muses. The Muses won the competition and then plucked out all of the Sirens' feathers and made crowns out of them.

By the fourth century, when pagan beliefs gave way to Christianity, belief in literal sirens was discouraged. Although Jerome, who produced the Latin Vulgate version of the Scriptures, used the word "sirens" to translate Hebrew tenim (jackals) in Isaiah 13:22, and also to translate a word for "owls" in Jeremiah 50:39, this was explained by Ambrose to be a mere symbol or allegory for worldly temptations, and not an endorsement of the Greek myth.

Sirens continued to be used as a symbol for the dangerous temptation embodied by women regularly throughout Christian art of the medieval era; however, in the 17th century, some Jesuit writers began to assert their actual existence, including Cornelius a Lapide, who said of Woman, "her glance is that of the fabled basilisk, her voice a siren's voice with her voice she enchants, with her beauty she deprives of reason - voice and sight alike deal destruction and death." Antonio de Lorea also argued for their existence, and Athanasius Kircher argued that compartments must have been built for them aboard Noah's Ark.

The Early Christian euhemerist interpretation of mythologized human beings received a long-lasting boost from Isidore's Etymologiae. "The Greeks imagine that 'there were three Sirens, part virgins, part birds,' with wings and claws. 'One of them sang, another played the flute, the third the lyre. They drew sailors, decoyed by song, to shipwreck. According to the truth, however, they were prostitutes who led travelers down to poverty and were said to impose shipwreck on them.' They had wings and claws because Love flies and wounds. They are said to have stayed in the waves because a wave created Venus."

Charles Burney expounded c. 1789, in A General History of Music: "The name, according to Bochart, who derives it from the Phoenician, implies a songstress. Hence it is probable, that in ancient times there may have been excellent singers, but of corrupt morals, on the coast of Sicily, who by seducing voyagers, gave rise to this fable."

John Lempriere in his Classical Dictionary (1827) wrote, "Some suppose that the Sirens were a number of lascivious women in Sicily, who prostituted themselves to strangers, and made them forget their pursuits while drowned in unlawful pleasures. The etymology of Bochart, who deduces the name from a Phoenician term denoting a songstress, favors the explanation given of the fable by Damm. This distinguished critic makes the Sirens to have been excellent singers, and divesting the fables respecting them of all their terrific features, he supposes that by the charms of music and song they detained travelers, and made them altogether forgetful of their native land."

Such euhemerist interpretations have been abandoned since the later 19th century, in favor of analyses of Greek mythology in terms of historical Greek social structure and their cultural system, and the Greek taxonomy of the spiritual world.