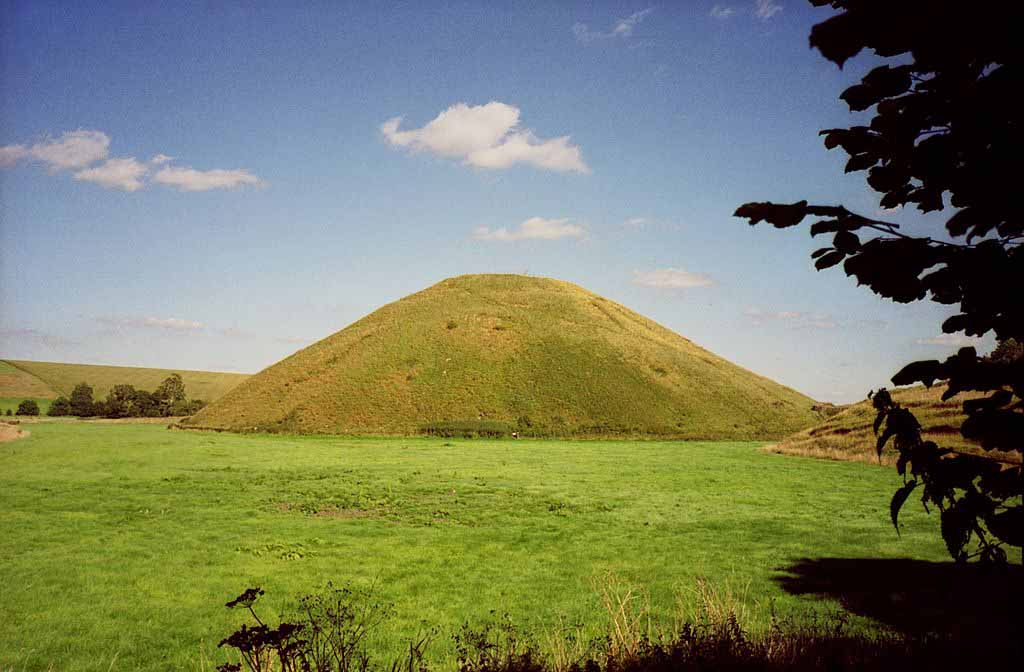 Recent excavations have allowed us to discover that the people who created it actually layered it in a three-part process similar to how we would create a battery. Silbury Hill may have been created as a 'natural Earth battery'.

Silbury Hill has been carbon-dated at 2660 years BC, the same era as the Giza pyramids. It contains an estimated 340,000 cubic metres of chalk and earth, rising to a height of 39.6 metres. The base of the monument is 167metres in diameter and it is perfectly round. The flat top is 30m across.

It is part of a sequence of ancient sites in the area that are in alignment. Despite its external appearance, this is actually a step pyramid, consisting of six, six metre high steps. The steps are walled with blocks of chalk, which easily deteriorates when left exposed. Consequently the builders preserved it, by covering it with earth and grass. Excavations have revealed that it is not a burial mound.

It has a base circumference of 1640 feet. It is composed of over 12 million cubic feet (339,600 cubic m.) of chalk and earth and covers over 5 acres (2 ha). Silbury Hill occupies a low-lying site and except at certain points in the landscape (notably from the West Kennet Long Barrow from which this photograph was taken), it does not protrude significantly above the horizon. 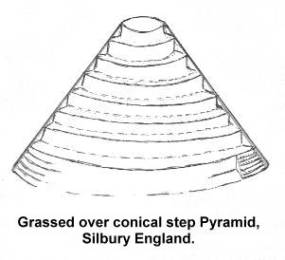 It was built in three stages, the first begun around 2,660 B.C.E. The last phase comprised the building of six concentric steps or terraces of chalk which were then covered with chalk rubble, flints, gravel, and finally soil to form a cone-shaped mound. Each of the six steps was concealed within the overall profile of the mound, except the last one at the top which was left as a terrace or ledge about 17 feet (5 m.) below the summit. This terrace is clearly visible on the eastern side of the mound, but less distinct from the west.

Various legends have been attached to Silbury Hill. Folklore has claimed it to be the burial place of an otherwise forgotten King Sil (or Zel); of a knight in golden armour; and even of a solid gold horse and rider. It is also told that the Devil was going to empty a huge sack of earth on the town of Marlborough, but was forced to drop it here by the magic of the priests from nearby Avebury.

According to William Stukeley, the top of the hill was dug into in 1723 and some bones were discovered together with an ancient bridle. The mound was again dug into in 1776 and in 1849. In 1967, excavations were undertaken by Richard Atkinson but again neither burials nor any clue to the mound's meaning were discovered. Atkinson did learn, however, through radiocarbon analysis that the mound dates to around 2660 B.C.E.

Further evidence from the remains of plants and insects indicated that the structure was begun during the first week in August, probably at the time of the Celtic festival of Lugnasadh (or Lammas) at the start of the harvest season. 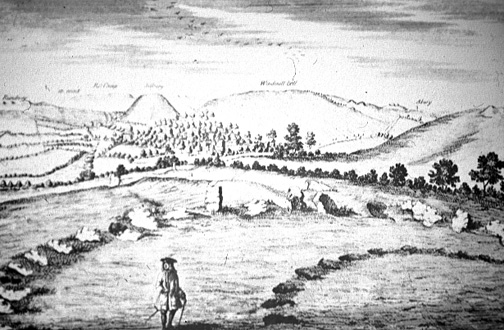 Silbury can clearly be seen in the background, its summit in line with the horizon, in a drawing made by William Stukeley of part of the Sanctuary in 1723.

The very top of the mound can also be discerned from the village of Avebury in what has been described as a precise geomantic relation with the so-called 'Obelisk' in the Avebury complex. It can be seen, however, only after the crops in the intervening field on the horizon have been harvested; the standing grain is sufficient to obscure the view. For some, this is further evidence for interpreting the mound in connection with harvest festivals.

The original purpose of Silbury is unknown, although various explanations have been put forward over the years. Recently, Michael Dames has suggested that the hill is a symbolic effigy of the ancient Mother Goddess and is to be associated with fertility rituals which marked the course of the year. The festival of Lugnasadh (or Lammas) in August, when it is thought Silbury was founded, celebrates the first fruits of the harvest. It has been pointed out that the spring which rises five hundred yards south of the hill and is the source of the River Kennet, was formerly called the Cunnit, a name which may be connected to the Mother Goddess and fertility.

Another explanation argues that Silbury Hill could have been used as an accurate solar observatory by means of the shadows cast by the mound itself on the carefully levelled plain to the north, towards Avebury. The meridian line from Silbury runs through Avebury church which stands on a ley line running between Stonehenge and the stone circle at Winterbourne Abbas. The same ley line also passes through two churches and the eastern slope of Silbury. Silbury, in fact, is a centre for alignments of straight prehistoric tracks, resurfaced by the Romans, and of standing stones. The Roman road between Marlborough and Bath runs directly towards Silbury Hill before swerving to avoid it. This would indicate that the Roman road followed a pre-existing track or ley line.

John Michell makes the following observations: "In view of the fact that in China mounds like that at Silbury were erected upon lung-mei, the paths of the dragon , there is good reason to suspect that Silbury itself was sited by Pre-Celtic Druids on a dragon line with the assistance of a geomancer's compass. It may also be inferred that the Chinese lung-mei stretch over the entire globe. Many centres of English dragon legend stand at the junction of well-marked leys, one notable long-distance example being the St Michael's line that runs from the Avebury circle to the extreme west of Cornwall."

In the early 18th century, William Stukeley visited the site on several occasions and witnessed, to his great distress, the destruction of numerous stones by farmers intent on clearing the land for fields. Stukeley agreed with Aubrey's identification of the site and in 1743 published his book Abury, a Temple of the British Druids, 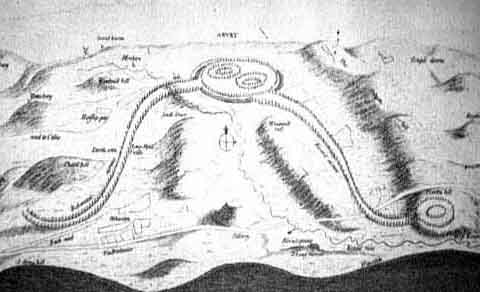 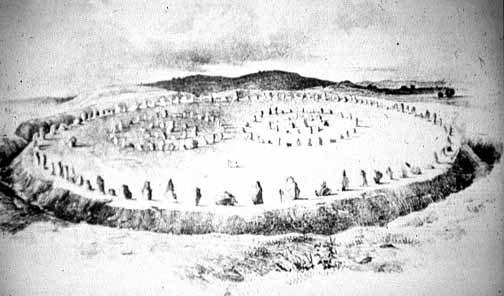 Mostly dating to around 2,600-2,500 B.C.E., the Avebury complex, which covers about 28 acres and is partially overlapped by the village, comprises a huge circular earthwork ditch, originally about 30 feet deep, and bank about a quarter of a mile in diameter which encloses an outer circle of standing stones. Within this outer circle are two inner circles, both about 340 feet in diameter. The northern inner circle, of which only a few stones remain, apparently consisted of two concentric circles; an inner one of 12 stones and an outer one of 27 stones. At the centre of the northern circle stood a trio of very large stones, two of which survive, called The Cove.

At the centre of the southern circle stood a tall stone over 20 feet in length called "the obelisk." It had already fallen when William Stukeley saw, and drew it, in the 18th century, and is now gone altogether. This site, as with the other missing stones at Avebury, is now marked by a concrete pillar.

The northern and southern inner stone circles are believed to have been built first, around 2,600 BCE, and the outer circle and the earthworks added about a hundred years later, around 2,500 B.E. The outer circle is breached at four points - roughly at points north, south, east, and west - to form entrances. From two of these originally ran two great avenues of which only the one, leading from the south entrance, the so-called "West Kennet Avenue", survives for a short way in reconstructed form with stones lining its course on both sides.

Originally, according to Stukeley, the West Kennet Avenue stretched all the way to the Sanctuary on Overton Hill, while the other, the Beckhampton Avenue, of which very little survives, terminated near the Beckhampton Long Barrow. Stukeley interpreted the avenues as representing a great stone serpent passing through a ring formed by the Avebury circle.

But Avebury is more than just a stone circle - although this is its main feature. There is also a rampart, a ditch and two mysterious avenues. The rampart or bank is on the outside, then comes the ditch. They both have four entrances and enclose some twenty eight acres. Inside these 'circles' - none of the circumferences are perfect, is the stone circle itself.

It once consisted of around one hundred unquarried stones; inside this larger circle were once two smaller circles. Only four stones of one of the smaller circles survive, although it is though there may have once been as many as twenty seven. None of the stones in the other small circle are now standing, although it is thought to have consisted of around twenty nine stones at one time. Silbury Hill 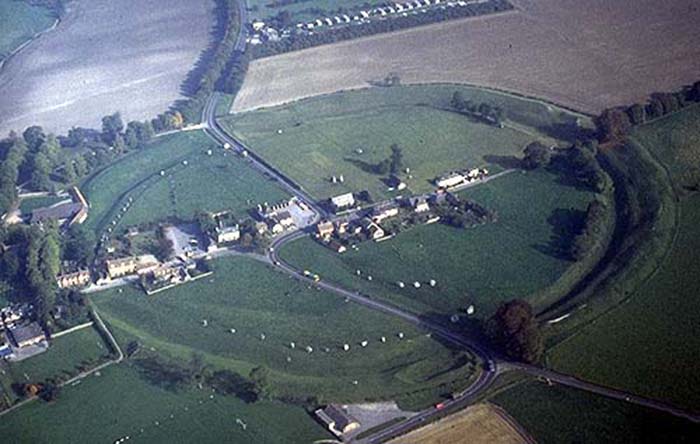