A sense is a physiological capacity of organisms that provides data for perception. The senses and their operation, classification, and theory are overlapping topics studied by a variety of fields, most notably neuroscience, cognitive psychology (or cognitive science), and philosophy of perception. The nervous system has a specific sensory system or organ, dedicated to each sense.

Humans have a multitude of senses. Sight (vision), hearing (audition), taste (gustation), smell (olfaction), and touch (somatosensation) are the five traditionally recognized senses. The ability to detect other stimuli beyond those governed by these most broadly recognized senses also exists, and these sensory modalities include temperature (thermoception), kinesthetic sense (proprioception), pain (nociception), balance (equilibrioception), vibration (mechanoreception), and various internal stimuli (e.g. the different chemoreceptors for detecting salt and carbon dioxide concentrations in the blood). However, what constitutes a sense is a matter of some debate, leading to difficulties in defining what exactly a distinct sense is, and where the borders between responses to related stimuli lay.

Other animals also have receptors to sense the world around them, with degrees of capability varying greatly between species. Humans have a comparatively weak sense of smell and a stronger sense of sight relative to many other mammals while some animals may lack one or more of the traditional five senses. Some animals may also intake and interpret sensory stimuli in very different ways. Some species of animals are able to sense the world in a way that humans cannot, with some species able to sense electrical and magnetic fields, and detect water pressure and currents. Read more


Extrasensory perception (ESP), is commonly called the sixth sense and includes reception of information not gained through the recognized physical senses but sensed with the mind. The term was adopted by Duke University psychologist J. B. Rhine to denote psychic abilities such as telepathy, psychometry, clairaudience, and clairvoyance, and their trans-temporal operation as precognition or retro-cognition.

Parapsychology is the study of paranormal psychic phenomena, including ESP. Parapsychology has been criticized for continuing investigation despite being unable to provide convincing evidence for the existence of any psychic phenomena after more than a century of research. The scientific community rejects ESP due to the absence of an evidence base, the lack of a theory which would explain ESP, the lack of experimental techniques which can provide reliably positive results, and considers ESP to be pseudoscience. Read more

Mouse Study Reveals Previously Unknown Taste Cell That Detects Nearly All Flavors   Science Alert - August 13, 2020
Five taste sensations and just three types of taste cells make up the world of flavors - or so we thought. A new discovery indicates there could be more complexity to this equation than we first imagined. Taste cells are receptors that group together to form taste buds, shaped like tiny garlic bulbs, on the tongue. Some taste buds can also be found on the soft palate (the roof of a person's mouth), and at the back of the throat. Taste cells can be ruthless, with good reason. If they sense some objectionable or potentially toxic taste, our taste buds tell us to reject and eject a mouthful of food. But taste something sweet, and they'll have us asking for more.


Sniffing out smell: How the brain organizes information about odors   Science Daily - July 8, 2020
Neuroscientists describe for the first time how relationships between different odors are encoded in the brain. The findings suggest a mechanism that may explain why individuals have common but highly personalized experiences with smell, and inform efforts better understand how the brain transforms information about odor chemistry into the perception of smell.


Approaching the perception of touch in the brain   Medical Express - November 25, 2019
More than ten percent of the cerebral cortex is involved in processing information about our sense of touch - a larger area than previously thought. An encouraging pat on the back or a soft sweater on the skin - even things that we do not actively explore with the hands, we perceive with our body perception.


Study shows sense of touch arises in the brain before birth   Medical Express - May 3, 2019
The development of a sense of touch has been studied by scientists for many years, but how it develops is still unclear. Prior research has shown that once it has developed, it exists as a sort of map imprinted on the cerebral cortex. Some have suggested that a basic map is created in the brain before birth and data points for it are added as newborns develop - sensory input from various body parts is simply added to the map. But now, that view might have to change, as the team in Spain reports evidence that suggests the map is already in place by the time a baby is born.


Scientists provide new insight on how the nose adapts to smells   Medical Express - February 26, 2019
Our noses may be able to adapt themselves to tell the brain, as efficiently as possible, about the most typical smells in our environment.


How brains distinguish between self-touch and touch by others   Medical Express - January 21, 2019
The ability to distinguish between self and others is extremely important. During the first period of life, newborn children develop somatosensory awareness of their bodies mainly through being touched by those who care for them. Problems with the self-concept, such as the ability to recognize one's own actions, are common in several psychiatric disorders. Most people cannot tickle themselves, but some patients with schizophrenia can, suggesting that their brain interprets sensory perceptions from their own body differently.


Genes on the move help nose make sense of scents   Science Daily - January 9, 2019
The human nose can distinguish one trillion different scents -- an extraordinary feat that requires 10 million specialized nerve cells, or neurons, in the nose, and a family of more than 400 dedicated genes. But precisely how these genes and neurons work in concert to pick out a particular scent has long puzzled scientists. This is in large part because the gene activity inside each neuron -- where each of these 10 million neurons only chooses to activate one of these hundreds of dedicated genes -- seemed far too simple to account for the sheer number of scents that the nose must parse.


Smell and behavior: The scents of taking action In all animals, including humans, smell - the oldest of the five senses - plays a predominant role in many behaviors essential for survival and reproduction. It has been known since ancient times that animals react to odors. In a new study scientists at show that an inhibitory circuit that releases the neurotransmitter GABA into the olfactory bulb strongly modulates behavioral responses to odors in lampreys. The study of these modulatory mechanisms allowed the researchers to discover a new pathway linking together olfactory and motor centers in the brain. This discovery demonstrates that odor scan activate locomotor centers via two distinct brain pathways.


Bodily sensations give rise to conscious feelings   Medical Express - August 29, 2018
Humans constantly experience an ever-changing stream of subjective feelings that is only interrupted during sleep and deep unconsciousness. Finnish researches show how the subjective feelings map into five major categories: positive emotions, negative emotions, cognitive functions, somatic states, and illnesses. All these feelings were imbued with strong bodily sensations. These results show that conscious feelings stem from bodily feedback. Although consciousness emerges due to brain function and we experience our consciousness to be "housed" in the brain, bodily feedback contributes significantly to a wide variety of subjective feelings.


Phantom odors: One American in 15 smells odors that aren't there, study finds   Medical Express - August 16, 2018
Imagine the foul smell of an ash tray or burning hair. Now imagine if these kinds of smells were present in your life, but without a source. A new study finds that 1 in 15 Americans (or 6.5 percent) over the age of 40 experiences phantom odors.


Scientists uncover new details in how sense of smell develops   Medical Express - August 10, 2018
Dogs, known for their extraordinarily keen senses of smell, can be trained to use their sensitive sniffers to find drugs, bombs, bed bugs, missing hikers and even cancer. Among dogs and other animals that rely on smell, at least one factor that may give them an advantage is a sheet of tissue in the nasal cavity.


Odors are perceived the same way by hunter-gatherers and Westerners   PhysOrg - June 18, 2018
At the same time they also videoed their faces so they could measure their facial expressions to the different odors after the experiment. The researchers replicated the finding that Jahai speakers use special odor words to talk about smells. this is what they found.


Scientists make cells that enable the sense of touch   PhysOrg - January 11, 2018
Researchers for the first time, coaxed human stem cells to become sensory interneurons - the cells that give us our sense of touch. The new protocol could be a step toward stem cell-based therapies to restore sensation in paralyzed people who have lost feeling in parts of their body. Sensory interneurons, a class of neurons in the spinal cord, are responsible for relaying information from throughout the body to the central nervous system, which enables the sense of touch. The lack of a sense of touch greatly affects people who are paralyzed. For example, they often cannot feel the touch of another person, and the inability to feel pain leaves them susceptible to burns from inadvertent contact with a hot surface.


How odors are turned into long-term memories   Science Daily - December 22, 2017
Neuroscientists have investigated which brain area is responsible for storing odors as long-term memories. Some odors can trigger memories of experiences from years back. A new study shows that the piriform cortex, a part of the olfactory brain, is involved in the process of saving those memories; the mechanism, however, only works in interaction with other brain areas. 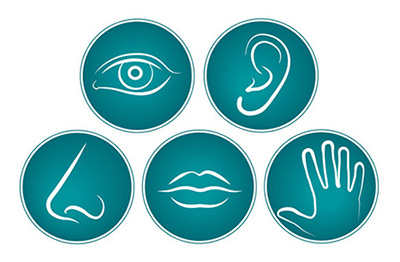 Humans have five basic senses: touch, sight, hearing, smell and taste. The sensing organs associated with each sense send information to the brain to help us understand and perceive the world around us. People also have other senses in addition to the basic five. Here's how they work.


Researchers discover surprising process behind sense of touch   PhysOrg - January 5, 2017
Biologists on the Florida campus of The Scripps Research Institute (TSRI) have discovered a new mechanism that likely underlies how we feel force or touch. Their study suggests that "rafts" of fatty lipids on the cell surface act as compartments to keep certain enzymes from mixing with their binding partners. Disrupt these rafts through touch - also called mechanosensation - and the enzymes will mix with their partners and react, triggering a signal that communicates the touch to responsive proteins in the cell.