Articles about Seniors in the News ...

More Than 4,000 Blood Tests Suggest Our Bodies Age in 3 Distinct Shifts - at 34 years, 60 years, and 78 years being the key thresholds   Science Alert - April 6, 2021   Science Alert - April 6, 2021
In other words, there's evidence that aging isn't one long, continuous process that moves at the same speed throughout our lives. The findings might help us understand more about how our bodies start to break down as we get older, and how specific age-related diseases Đ including Alzheimer's or cardiovascular disease - could be better tackled. The same study has also put forward a new way of reliably predicting people's ages using the protein levels (the proteome) in their blood. 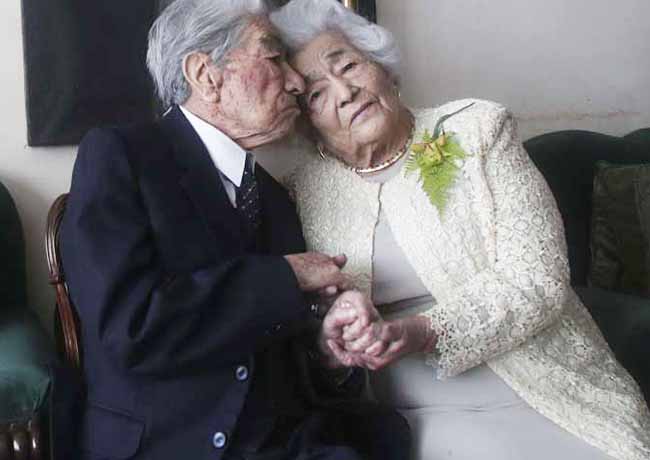 Julio Mora slipped away from his parents to secretly marry Waldramina Quinteros one February day. Both families disapproved. Seventy-nine years later, they're still together - he at 110 years of age, and she at 104, both lucid and both in good health, though relatives say they're a little depressed because they miss their big family get-togethers due to the pandemic.


New type of dementia identified   BBC - April 30, 2019
Millions of elderly people have a form of dementia that has been misdiagnosed as Alzheimer's disease, according to researchers. One expert called it the most important dementia finding in years. The condition, limbic-predominant age-related TDP-43 encephalopathy, or Late, shares similar symptoms to Alzheimer's, but it is a distinct disease, the journal Brain reports. It may partly explain why finding a dementia cure has failed so far.


Link between what we see and how we remember 'breaks' as we get older   Medical Express - October 27, 2018
Forgetfulness and age-related memory lapses are a common complaint for many older adults, but what is still not understood is what causes these changes.


Older people slowdown in the winter: Cognitive skills of over 70s gets worse during the darker months, study finds   Daily Mail - September 5, 2018
For people of a certain age, the cryptic crossword may be just about to get easier. Over-70s can expect to be at the top of their game for remembering things when the autumn equinox comes at the end of the month. The effect is like being almost five years younger, a study has found, and appears to last from late September to early October. Scientists made the discovery after finding that memory and problem-solving skills change throughout the year. The study involved more than 3,300 older people taking extensive memory tests. It found performance peaked in late summer and early autumn before slowly declining and hitting rock bottom in late winter and early spring.


Older adults grow just as many new brain cells as young people   Science Daily - April 6, 2018
Researchers show for the first time that healthy older men and women can generate just as many new brain cells as younger people. There has been controversy over whether adult humans grow new neurons, and some research has previously suggested that the adult brain was hard-wired and that adults did not grow new neurons. This study counters that notion. The findings may suggest that many senior citizens remain more cognitively and emotionally intact than commonly believed.


Learning and staying in shape key to longer lifespan, study finds   Science Daily - October 13, 2017
People who are overweight cut their life expectancy by two months for every extra kilogram of weight they carry, research suggests. A major study has also found that education leads to a longer life, with almost a year added for each year spent studying beyond school.


Youthful DNA in old age   Science Daily - September 22, 2016
The DNA of young people is regulated to express the right genes at the right time. With the passing of years, the regulation of the DNA gradually gets disrupted, which is an important cause of aging. A study of over 3,000 people shows that this is not true for everyone: there are people whose DNA appears youthful despite their advanced years.


Carnegie Mellon engineers develop fall-prevention sensors   PhysOrg - May 25, 2016
Every 13 seconds, an older adult is treated in the emergency room for a fall. Every 20 minutes, an older adult dies from a fall-related trauma. It's understandable, considering these statistics, why the College of Engineering survey found that 54% of 1900 U.S. adults are worried about an older parent falling, and why 81% of respondents expressed an interest in new sensor technology that can anticipate and prevent falls.


Study finds that aging warps our perception of time   Medical Express - December 15, 2015
Much like trying to watch a video with the audio out of synch, older adults may have difficulty combining the stimuli they see and hear, and it could have implications for rapid decision-making tasks such as driving, according to new research. When researchers presented them with both a light and sound at the same or different times, they found that young and older adults could determine whether they occurred simultaneously with similar accuracy. But when asked to determine which appeared first, the light or the sound, older adults performed much worse.


The Science of Meditation's Effects on Aging   Huffington Post - December 8, 2015 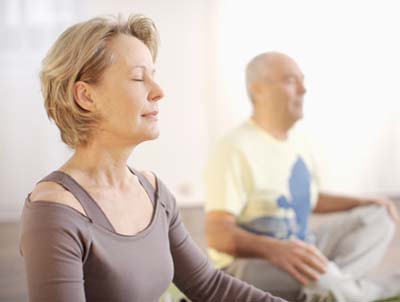 A growing body of research supports the immediate benefits of meditation, such as reduced stress and anxiety levels, lower blood pressure, and enhanced happiness. Studies on mindfulness interventions show these effects are common in as few as eight weeks. While these initial perks may be reason enough for us to practice, meditation's positive impact appears to be even more far-reaching, potentially adding years to our lives and improving cognitive function well into old age.


Scientists identify that memories can be lost and found   Science Daily - August 4, 2015 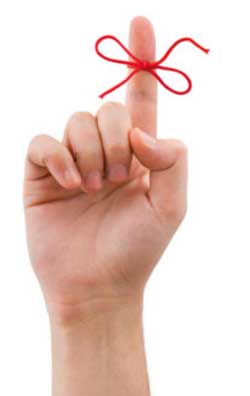 A team of scientists believe they have shown that memories are more robust than we thought and have identified the process in the brain, which could help rescue lost memories or bury bad memories, and pave the way for new drugs and treatment for people with memory problems. Scientists say that reminders could reverse the amnesia caused by methods previously thought to produce total memory loss in rats. 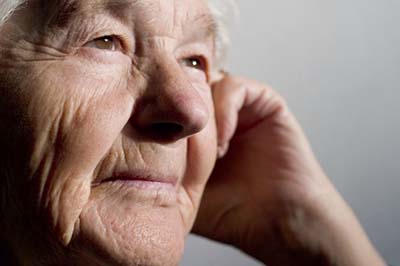 Patients who aren't even able to remember their own names for years may suddenly recognize their family members and have normal conversations. The varying physiological states of people who experience terminal lucidity suggest that a single mechanism isn't responsible. 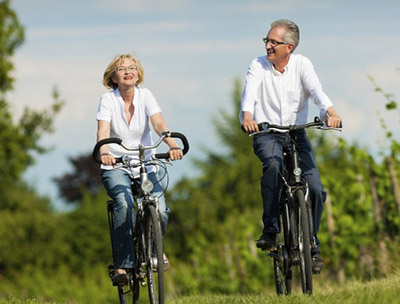 The decline in brain and body function with aging is caused more by inactivity than it is just by aging. A new study of 85 male and 41 female fit amateur cyclists, aged 55 to 79, found that most of them were physically much younger than most people of the same age.
If you have never exercised, start now.
If you exercise regularly, continue to do so.
Find an exercise in which you can keep moving almost every day: dancing, walking, various exercise machines, cycling, skiing, and so forth.
Those who choose to ride a bicycle should worry more about being hit by a car than about the disabilities associated with aging.
In our modern societies, people are living longer and often spend many years suffering terrible disabilities of both mind and body. Most North Americans over 70 cannot walk fast. One in eight people over 70, and one in two over 85, suffer from dementia. Exercise helps to slow damage to your mind and body associated with aging.
Lack of exercise is associated with increased risk for overweight, diabetes, heart attacks, strokes, many different cancers, and premature death.

Why are 95% of people who live to 110 women? You're as old as your stem cells   Science Daily - June 4, 2015
Human supercentenarians share at least one thing in common--over 95 percent are women. Scientists have long observed differences between the sexes when it comes to aging, but there is no clear explanation for why females live longer. In a discussion of what we know about stem cell behavior and sex, researchers argue that it's time to look at differences in regenerative decline between men and women. This line of research could open up new explanations for how the sex hormones estrogen and testosterone, or other factors, modify lifespan. 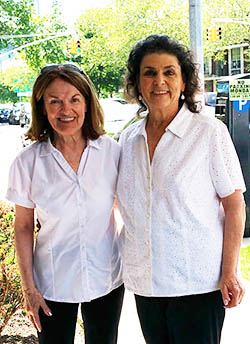 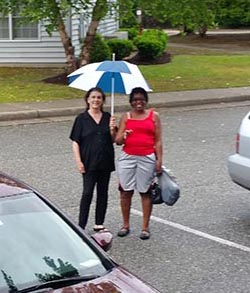 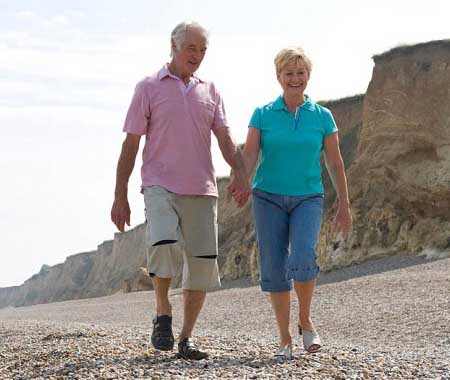 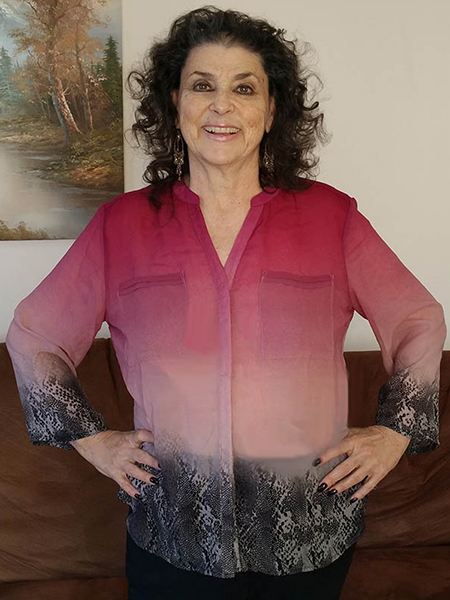