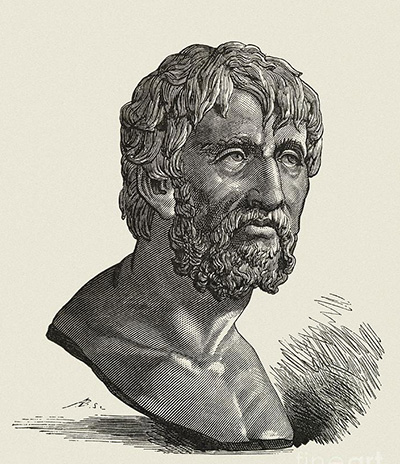 Lucius, or Marcus, Annaeus Seneca, known as Seneca the Elder and Seneca the Rhetorician (ca. 54 BC- ca. 39 AD) was a Roman rhetorician and writer, born of a wealthy equestrian family of Cordoba, Hispania. Seneca lived through the reigns of three significant emperors; Augustus (ruled 27 BC - 14 AD), Tiberius (ruled 14 AD - 37 AD) and Caligula (ruled 37 AD - 41 AD).

His praenomen is uncertain, but in any case Marcus is an arbitrary conjecture of Raphael of Volterra. During a lengthy stay on two occasions at Rome he attended the lectures of famous orators and rhetoricians, to prepare for an official career as an advocate. His ideal orator was Cicero, and he disapproved of the florid tendencies of the oratory of his time.

During the civil wars (which kept him in Spain and thus prevented him from ever hearing Cicero speak) his sympathies, like those of his native place, were probably with Pompey, as were those of his son and his grandson (the poet Lucan).

By his wife Helvia of Corduba he had three sons: L. Annaeus Novatus, adopted by his father's friend, the rhetorician Junius Gallio, and subsequently called L. Junius Gallio; L. Annaeus Seneca, the philosopher; Annaeus Mela, the father of the poet Lucan.

As he died before his son was banished by Claudius (41; Seneca, ad Helviam, ii. 4), and the latest references in his writings are to the period immediately after the death of Tiberius, he probably died about AD 39.


At an advanced age, at the request of his sons, he prepared, it is said from memory, a collection of various school themes and their treatment by Greek and Roman orators. These he arranged in ten books of Controversiae (imaginary legal cases) in which seventy-four themes were discussed, the opinions of the rhetoricians upon each case being given from different points of view, then their division of the case into different single questions (divisio), and, finally, the devices for making black appear white and extenuating injustice (colors).

Each book was introduced by a preface, in which the characteristics of individual rhetoricians were discussed in a 'lively' manner. The work is incomplete, but the gaps can be to a certain extent 'filled up', with the aid of an epitome made in the 4th or 5th century for the use of schools. The romantic elements were utilized in the collection of anecdotes and tales called Gesta Romanorum. For Books I, II, VII, IX, and X we possess both the original and the epitome; for the remainder, we have to rely upon the epitome alone. Even with the aid of the latter, only seven of the prefaces are available.

The Controversiae were supplemented by the Suasoriae (exercises in hortatory or deliberative oratory), in which the question is discussed whether certain things 'should, or should not be done'. The whole forms the most important authority for the history of contemporary oratory.

Seneca was also the author of a lost historical work, containing the history of Rome from the beginning of the civil wars almost down to his own death, after which it was published by his son. Of this we learn something from the younger Seneca's De vita patris (H. Peter, Historicorum Romanorum fragmenta, 1883, pp. 292, 301), of which the beginning was discovered by Barthold Georg Niebuhr. The father's claim to the authorship of the rhetorical work, generally ascribed to the son during the Middle Ages, was vindicated by Raphael of Volterra and Justus Lipsius.

Quote - "Against a slave everything is permitted."