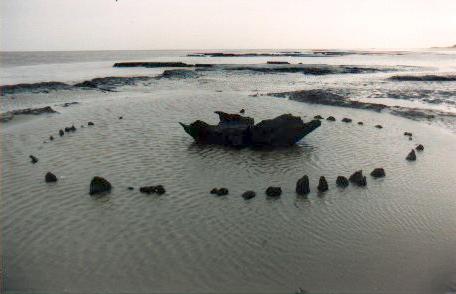 Seahenge or Holme I is a Bronze Age monument discovered in 1998 just off the coast of the English county of Norfolk at Holme-next-the-Sea. It is sometimes described as a timber circle but bears only a superficial resemblance to this monument type.

The site consisted of an outer ring comprising fifty-five small split oak trunks forming a roughly circular enclosure around 7 m by 6 m. Rather than being placed in individual holes, the timbers had been arranged around a circular construction trench. Their split sides faced inwards and their bark faced outwards (with one exception where the opposite is the case).

One of the trunks on the south western side had a narrow Y fork in it, permitting access to the central area. Another post had been placed outside this entrance, which would have prevented anyone from seeing inside. The timbers were set in ground to a depth of 1 m from the contemporary surface although how far they originally extended upwards is not known. In the centre of the ring was a large inverted oak stump.

It is possible to date the creation of Seahenge very accurately through dendrochronology since the rings on the trees can be correlated with other overlapping tree ring variations; the date of felling the oaks was found to have been in the spring or summer of 2049 BC. The upturned central tree stump was 167 years old when it was felled. Between 16 and 26 different trees were used in building the monument with palynological evidence suggesting they came from nearby woodland.

Analysis of axe marks on the timbers indicates that at least 51 different axes were used in working the timbers. The largest axe was used to cut the central tree and not any of the other timbers. The excavators interpret each unique axe as representing a different individual, and thus consider it likely that Seahenge was a community endeavour. Holes in the central stump indicate that it was pulled onto site by rope. Pieces of the rope, made from honeysuckle stems, were found under the stump.

The site was discovered because of the actions of the tide on Holme Dunes, which is gradually wearing away the peat layers to reveal the landscapes laid down many thousands of years ago. In this instance the wooden posts and stump had been preserved in the peat and were revealed at low tides.

Since the entire structure had been in an anaerobic waterlogged state for several thousand years, the logs had survived with little damage. In the early Bronze Age, the site was probably a saltmarsh environment, between the sea and the forest before the ocean encroached to form the modern coastline. Tidal action had scoured away overlying sediment which had built up in the intervening centuries revealing the timbers for the first time since prehistory.

Exposure to the air put the timbers at immediate risk; as the seawater which has slowly seeped into the timber over time began to drain away, it left the wood to dry out and crumble. Local archaeologists from the Norfolk Archaeological Unit and volunteers worked in the exhausting intertidal conditions to conserve and record the site.

Researchers were unable to determine activity at Seahenge in the centuries after it was built, and its purpose is consequently unknown. However, the presence of Middle and Late Bronze Age pottery at the site suggests that it became a focal point again several centuries after construction.

Theories about the site have focused on the idea of inversion, as represented by the upside-down central tree stump and the single post turned 180 degrees from the others within the circle itself. The theme of inversion has been noticed in some Early Bronze Age burials. Not all the split posts can be accounted for and it has been suggested that another structure was built nearby using them.

Seahenge is so named by analogy with Stonehenge and does not possess an extant henge and appears to have had little functionally in common with its namesake. The contemporary ground surface associated with the monument has long since been washed away meaning no associated features survive and the silt Seahenge stood in when found considerably postdates the timber circle. It is thought that Seahenge was a mortuary enclosure for the use of excarnation rather than a henge.

Most archaeological excavations in Britain do not attract much public attention or controversy, but Seahenge became the subject of a very public debate. The photogenic and ephemeral nature of the location attracted national media attention. Some people objected to the excavation - some local people felt they had not been consulted about the fate of part of their local heritage and that it should be left alone, complaining that Seahenge would most likely be transported to London where it would be displayed, out of its local context, in the British Museum.

Although the precise function of the site is unknown, some neo-Druids objected on religious grounds; and some people were not aware that the circle was really at risk from the sea. A great many people were attracted to the site to see it, or to protest, and the presence of such large numbers itself contributed further to the risk of damaging the site.

The Seahenge case has demonstrated several contentious subjects in the field of heritage management. Issues such as the views of local people and other interested groups compared with the aims of academia and the decisions that have to be made over what to preserve and what to leave to nature have had to be tackled by the archaeologists and government agencies connected with the site.

In 1999, English Heritage arranged for the wood to be transported 50 miles to Flag Fen near Peterborough, where it was continually soaked in wax-emulsified water to slowly (over years) replace the moisture in the wood with wax. It was later transferred to Portsmouth where maritime archaeology experts at the Mary Rose Trust continued the programme at their purpose-built site. Conservation work is complete, with a recreated Seahenge near its original site, at the refurbished Lynn Museum in King's Lynn and opened to the public in April 2008 .

One hundred metres east, an older ring of two concentric timber circles surrounding a hurdle lined pit containing two oak logs has also been found. Known as Holme II, it dates to the centuries before Holme I (c. 2400-2030 BC) although the two sites may have been in use together. Although also threatened with destruction by the sea, this site has been left in situ and exposed to the tidal actions of the sea. Archaeologists have suggested that this decision by English Heritage relates to the controversy over digging Holme I.