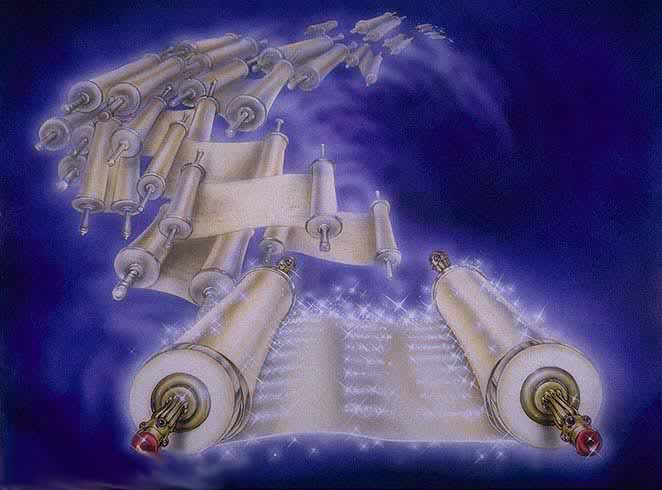 A scroll is a roll of parchment, papyrus, or paper which has been written upon. They were used in ancient civilizations before the codex or bound book was invented in the first century. The linear access of the scroll meant that it was easy to confuse the scribes; for example, there are versions of the Egyptian Book of the Dead with multiple, repeated sections.

Scrolls are still used today in some religious contexts; in Jewish and many other cultures, a scroll is read with one roll to the left and one roll to the right, and with columns of text running from top to bottom. Quality control of a Jewish Torah is maintained by counting the number of characters, and disposing of the faulty versions, before they can be used.

Some cultures use scrolls with one roll at the top and one at the bottom, called a hanging scroll, without any obvious division of the text into columns. In some scroll-using cultures painted illustrations ran above the columns of text, either in a continuous band or broken into scenes above either a single or double-column of text. Typically, each end of a scroll is attached to a rod or baton for support and to protect from damage during storage and use.

When we think of scrolls we often think about messages of great importance placed on bits of rolled-up papyrus to be found as humanity needs the information, as if it were part of their initiation into awareness. Just as all ancient artifacts are uncovered, their information revealed as if by design, so, too, are scrolls found telling the story of humanity's search to find the truth about its creation.

Scrolls are generally found in groups.

Since the 4th millennium B.C., scribes have created books from within scriptoria. Before the invention of moveable type, all books were written by hand, and any copies, likewise were generated manually. The book itself has seen radical metamorphosis.

The first writings that can be called books were made on clay tablets. The scribe, using a stylus, wrote in the soft clay, and errors could be easily smoothed over and corrected. After the clay dried, it was an indelible book. Waxed boards were an improvement over clay tablets as regards to ease of handling and storage. As with clay, errors in wax could be smoothed over and corrected, and in addition, the waxed boards could be reused later if necessary. Papyrus, parchment, and paper were the next successive developments which facilitated the creation of books closer to the form we know today.

Papyrus books were in the form of scrolls or rolls. Later, (c. 4th century) the parchment codex, a loose-leaf manuscript, ultimately replaced the papyrus scroll. There seems to have always been a need to reuse writing materials, and during the 7th through the 9th centuries, many parchment manuscripts from the 5th through the 7th centuries were shaved, scrubbed and scoured to be ready for rewriting. These recycled parchments are called palimpsests. Then in the 13th century, paper began displacing parchment.

All of this evolution in the book was accompanied by one constant, the scriptorium. Scribes in Hebrew history transcribed the books of the Law, and the very earliest Christian cenobites copied Biblical books, and other Christian writings. St. Pachomius (292-346), founder of the first cenobitic Christian community, does not mention scribes in his Rule, however, other documents of the period or shortly after his death confirm their presence in his monasteries. St. Jerome (331-420) saw the scriptorium as a source of revenue for the monasteries - and for the monks, a stimulus for reading.

The director of the scriptorium, the armarius, gave necessary instructions, assigned tasks, distributed writing materials, and managed all writing, art work, and collating. Copying text was the scribe's primary task. Rubrics, ornate initials, and other decorative flourishes were added to the pages by therubricators and/or miniators. Very rarely was the scribe, rubricator, and miniator the same monk.

The scribe, before writing, however, cut the parchment into the desired size, which varied greatly depending upon the client's instruction, the purpose of the book, and the style of the period and locale. Some books were pocket-size prayerbooks, while others were large choir books to be used in the monastery church. For cutting the parchment, the scribe was given a sharp, curved knife (novacula or rasorium) and a ruler (regula,linula, norma, canon, or præductale). If the parchment was torn or damaged, the scribe would effect repair with glue or often sewing artistic designs with needle and thread of varicolored silk.

The work of the scribes, miniators, and rubricators was meticulous and painstaking, and the armarii took great care to insure the absence of errors. During the Middle Ages, to certify copy fidelity, formulae tracing back to the ancient Orient were often appended to manuscripts. St. Jerome, who maintained his own personal scriptorium and staff of scribes, has transmitted such a formula of St. Irenaeus (d.202): "You who will transcribe this book, I charge you, in the name of our Lord Jesus Christ and of His glorious Second Coming, in which He will come to judge the living and dead, compare what you have copied against the original and correct it carefully. Furthermore, transcribe this adjuration and place it in the copy." (De Viris illustribus 35)

It should be comforting for us to know that in the face of such a weighty admonition, the scribes had the liberty of some personal expression (by permission, of course) within the manuscripts they copied. Hebrew scribes would often add at the ends of books the words Amen, Sela, or Salom, meaning, respectively, "So be it!", "Pause!" and "Peace!" Latin monks, in addition to using the now Christianized word Amen, added functional terms such as Explicuit, "The End", or Explicuit feliciter, "Thank goodness it's finished!", or other expressions of relief.

As today, the basic unit of the book was the double sheet, diploma, plicatura, or rarely arcus. Once folded, these diplomae were gathered inside one another, just as books are gathered today. Unlike today, it was a difficult task coordinating a large number of diplomae so that facing folia (individual pages) were in proper numerical order, hence, the largest mediæval book was usually a sexternion, or six diplomae. Naturally smaller books were also made: five diplomae or quinternion, four diplomae or quaternion, and likewise ternion, and binion. On the European continent until the 12th century quaternions were the most popular book, with binions, ternions, and quinternions not too far behind in popularity.

Curiously, the preference of the Irish, as well as that of the ancients, was the quinternion. In the 13th century, possibly as a result of the benefits of the paper codex, sexternions became plentiful, and even books of ten diplomae, decaternion were made.

As mentioned above, St. Jerome maintained his own personal scriptorium, as did other influential men of the time such as Origen and St. Augustine of Hippo. According to St. Clement of Alexandria (d.c. 215), as early as the 5th century B.C. Anaxagoras employed his private scriptorium, as did Atticus in the time of Cicero.

The scriptoria were producing their last parchment books in the 14th and on into the 15th century. The paper codex was having its sway. However, even as late as the 17th century, parchment was used for precious liturgical volumes and collectors' books (nostalgia is nothing new). The 15th century invention of the printing press cast an ominous shadow on the monks' scriptoria.

As with so many things, if we look to the East we find centuries-old prototypes of technology. In 11th century China, printing was accomplished with moveable wooden characters; and in 14th century Korea, cast metal characters were used.

It was not until 15th century Europe, however, that Laurens Jansoon Coster from Haarlem, the Netherlands, and Procopius Waldfoghel from Avignon, southern France first used moveable type. It was Johann Gutenberg of Mainz, Germany, however, who is remembered for devising the most satisfactory printing method of his time. As early as 1439, Gutenberg was experimenting with his method of printing. The earliest dated specimen of printing, dated 1454, is a collection of indulgences by Pope Nicholas V, and the Gutenberg or Forty-two-Line Bible, completed in 1456, has the honor of being the first, complete, printed book.

Even after the triumph of printing, the manuscripts of the scriptoria had their influence. The style of script and its position on the page, the artistic rubrication, the flourish of initial lettering, and the intricate marginal designs provided a model for the printed page. In fact, in the early development of printing, these illuminations were added by hand. Later when the woodcut, metal-cut, and type form served the purpose, printers would employ artists to create woodcut illustrations copying the illuminations of manuscripts.

One prominent illustrator was Albrecht Dürer (1471-1528). Another illustrator, Erhard Reuwich, journeyed with the author ostensibly to draw scenes as he and the author witnessed them. His innovative method falls into question, however, with the presence in one book of his representation of a unicorn.

In what can be considered an upgrade to the scriptorium, Cardinal Juan de Torquemada in 1476, persuaded Conrad Sweyenheym and Arnold Pannartz of Mainz to operate a printing studio in the protocenobium of Santa Scholastica at Subiaco, Italy - the site of St. Benedict's original monasteries. This venture was the first printing house in Italy.

The Brethren of the Common Life (14th-16th century, Netherlands and Germany) continued their work in the classic scriptorium about 100 years longer than all other monasteries. Their manuscripts, which included vitae of the saints, theological works, and liturgical books, were beautifully illuminated and bound. They were dependent upon the scriptorium work and simple arts and crafts for their revenue, and they found a healthy market of commissions.

A passage from their customary, or house rules, reflects the significance they placed on scriptorium work: "Concerning the work of copying, note that you should order the work of your hands to the end that it may lead you to purity of heart, because you are weak and cannot be always at spiritual exercises and for this reason was handiwork instituted. Wherefore you ought to attend in your copying to three things, to wit, that you make the letters properly and perfectly, that you copy without error, that you understand the sense of what you are copying, and that you concentrate your wandering mind on the task."

Elsewhere in the customary is found this instruction for the brethren: "Twice a week they write for one hour in the evening for the poor, to wit from six to seven." This attitude of the efficacy of the scriptorium was likewise pervasive in the monastery of St. Martin of Tours where copying was the only skill allowed the monks.

Since the close of the 16th century, when the Brethren of the Common Life and their revered scriptoria faded away, calligraphic copying and illumination by hand have served the purpose merely of artistic interest, while the practical rôle of producing books fell to the printing press.

In history's ageless manuscript, however, the names of monk, scribe, and scriptorium are ornately and indelibly transcribed. Scrolls