Saturn is the sixth planet from the Sun and the second largest planet in the Solar System, after Jupiter. Saturn is named after the Roman god Saturn, equated to the Greek Cronus (the Titan father of Zeus), the Babylonian Ninurta and the Hindu Shani. Saturn's symbol represents the Roman god's sickle.

In astronomy, the planet we now call Saturn because of Roman influence was called Khronos by the Greeks. It was the outermost planet god/deity, and was considered the seventh of the seven heavenly objects that are visible with the naked eye. Given that it had the longest observable repeatable period in the sky, which is currently around 30 years, it was thought to be the keeper of time, or Father Time, since no other objects had been seen or recorded to have a longer period. That is why it is often depicted as an elderly man with a long gray beard.

Saturn has been known since prehistoric times. In ancient times, it was the most distant of the five known planets in the solar system (excluding Earth) and thus a major character in various mythologies.


Babylonian astronomers systematically observed and recorded the movements of Saturn.


In Hindu astrology, there are nine astrological objects, known as Navagrahas. Saturn, one of them, is known as "Shani", judges everyone based on the good and bad deeds performed in life. In the 5th century CE, the Indian astronomical text Surya Siddhanta estimated the diameter of Saturn as 73,882 miles, an error of less than 1% from the currently accepted value of 74,580 miles, for which there exist several possible explanations.


Ancient Chinese and Japanese culture designated the planet Saturn as the Earth Star. This was based on Five Elements which were traditionally used to classify natural elements.


In ancient Hebrew, Saturn is called 'Shabbathai'. Its angel is Cassiel. Its intelligence or beneficial spirit is Agiel (layga) and its spirit (darker aspect) is Zazel (lzaz).


In Ottoman Turkish, Urdu and Malay, its name is 'Zuhal', derived from Arabic.


In ancient Roman mythology, the god Saturnus, from which the planet takes its name, was the god of the agricultural and harvest sector. The Romans considered Saturnus the equivalent of the Greek god Cronus.

The Greeks had made the outermost planet sacred to Cronus, and the Romans followed suit. Ptolemy, a Greek living in Alexandria, observed an opposition of Saturn, which was the basis for his determination of the elements of its orbit.

Beginning on December 17 each year, during the festival known as the Saturnalia, the Golden Age was to be restored for seven days. All business stopped and executions and military operations were postponed. It was a period of goodwill, devoted to banquets and the exchange of visits and gifts. A special feature of the festival was the freedom given to slaves, who during this time had first place at the family table and were served by their masters. 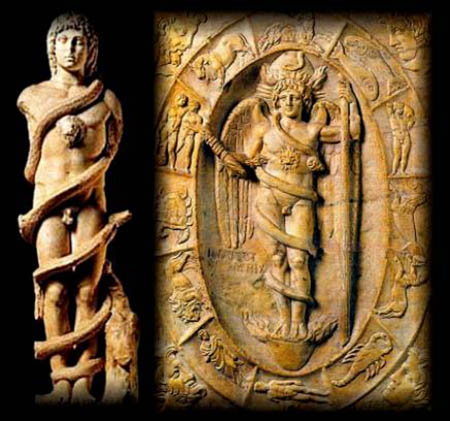 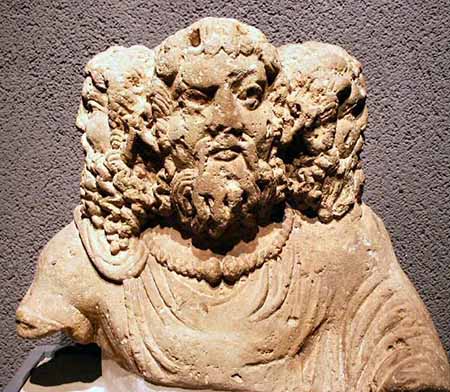 Chronos was imagined as a god, serpentine in form, with three heads - those of a man, a bull, and a lion. He and his consort, serpentine Ananke (Inevitability), circled the primal world egg in their coils and split it apart to form the ordered universe of earth, sea and sky.

Chronos was confused with, or perhaps consciously identified with, due to the similarity in name, the Titan Cronus already in antiquity, the identification becoming more widespread during the Renaissance, giving rise to the allegory of "Father Time" wielding the harvesting scythe. He was depicted in Greco-Roman mosaics as a man turning the Zodiac Wheel. Chronos, however, might also be contrasted with the deity Aion as Eternal Time. Chronos is usually portrayed through an old, wise man with a long, grey beard, such as "Father Time". Some of the current English words whose etymological root is khronos/chronos include chronology, chronometer, chronic, anachronism, and chronicle.

Cronus was the ruling Titan who came to power by castrating his Father Uranus. His wife was Rhea. There offspring were the first of the Olympians. To insure his safety Cronus ate each of the children as they were born. This worked until Rhea, unhappy at the loss of her children, tricked Cronus into swallowing a rock, instead of Zeus. When he grew up Zeus would revolt against Cronus and the other Titans, defeat them, and banish them to Tartarus in the underworld. Cronus managed to escape to Italy, where he ruled as Saturn. The period of his rule was said to be a golden age on Earth, honored by the Saturnalia feast.


In Greek mythology, Chronos in pre-Socratic philosophical works is said to be the personification of time. He emerged from the primordial Chaos. He is often mythologically confused with the Titan Cronus. He was depicted in Greco-Roman mosaics as a man turning the zodiac wheel. Often the figure is named Aeon (Eternal Time), a common alternate name for the god. His name actually means "Time", and is alternatively spelled Khronos (transliteration of the Greek), Chronos, Chronus (Latin version). Some of the current English words which show a tie to khronos/chronos and the attachment to time are chronology, chronic, and chronicle.