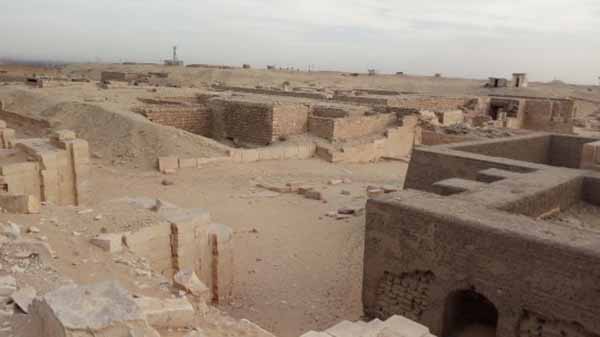 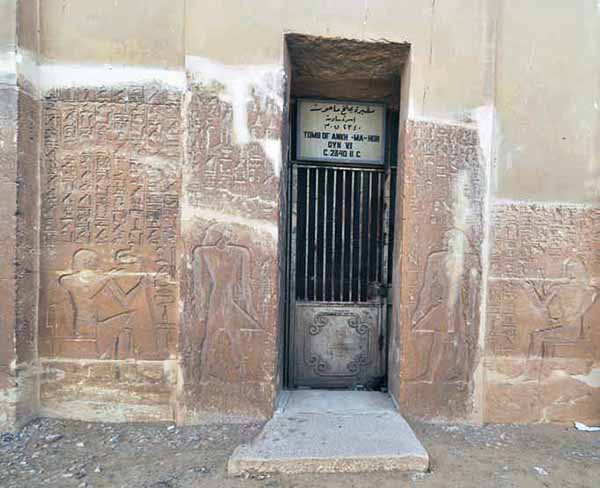 This mastaba is from the 6th Dynasty along with those of Mereruka and Kagemni. In the entrance the reliefs show scenes involving agriculture and fording. Medical scenes are shown in the doorway that leads into a five pillared room. Thus, this tomb is referred to as the Physician's Tomb. Ankh-mahor was not a physician. He was a ka-priest. The reliefs in the five-pillared room are not in good condition, however they do show mourners very graphically. 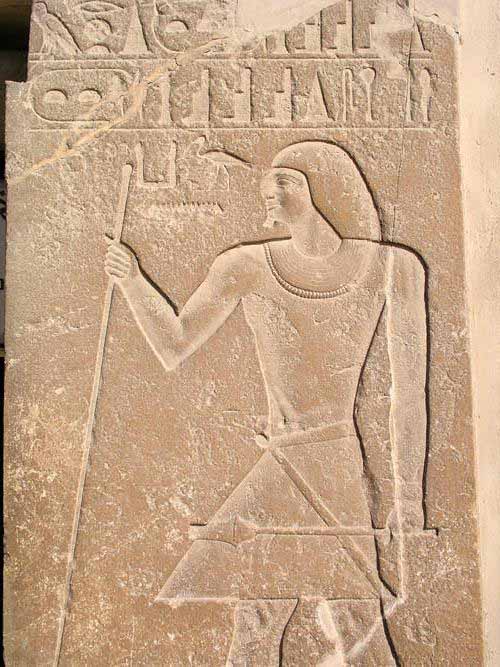 Kagemni was a vizier from the early part of the reign of King Teti of the Sixth Dynasty of Egypt. Kagemni's wife Nebtynubkhet Sesheshet was a King's Daughter and likely the daughter of Teti.

Kagemni was buried in the largest mastaba in the Teti cemetery in Saqqara. The tomb is a large 32 m. x 32 m. square.

The mastaba was constructed of large blocks of limestone. Part of the mastaba consists of a chapel with six rooms, a pillared hall, five magazines, two chambers containing boats, a serdab and a staircase which gives access to the roof. The chapel walls are decorated and so are the walls of the burial chamber, which was located at the bottom of a shaft. The burial chamber contained an inscribed stone sarcophagus with a wooden coffin inside it.

The rooms off the pillared hall show Kagemni in a carrying chair with attendants. This scene includes several of his titles. Other scenes in this room show birds including a scene where geese are being force fed. Another scene shows hyenas being force fed, in a manner very similar to that in the tomb of Mereruka. 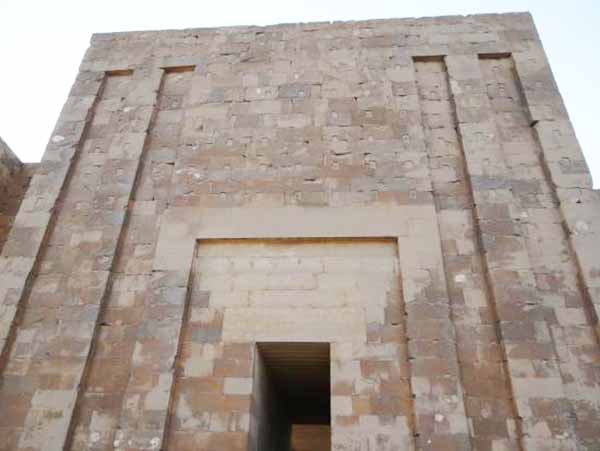 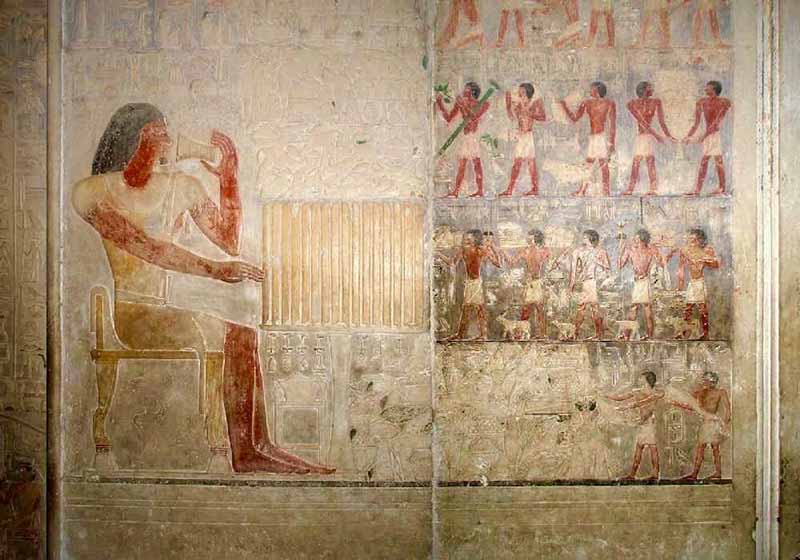 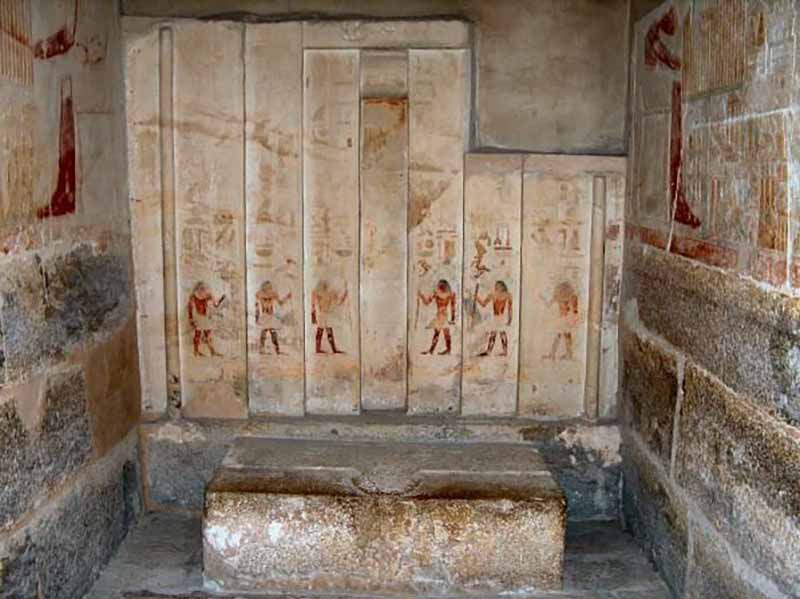 Ptah-Hotep was an ancient Egyptian vizier during the late 25th century BC and early 24th century BC Fifth Dynasty of Egypt. Ptahhotep was the city administrator and vizier (first minister) during the reign of Pharaoh Djedkare Isesi in the Fifth Dynasty. He is credited with authoring The Maxims of Ptahhotep, an early piece of Egyptian "wisdom literature" meant to instruct young men in appropriate behavior.

He had a son named Akhethetep, who was also a vizier. He and his descendants were buried at Saqqara. However, some believe he was instead buried near the tomb of Cleopatra.

Ptahhotep's tomb is located in a mastaba in North Saqqara (Mastaba D62), where he was laid to rest by himself. His grandson Ptahhetep Tshefi, who lived during the reign of Unas, was buried in the mastaba of his father (Mastaba 64). Their tomb is famous for its outstanding depictions. Next to the vizier's titles he hold many other important positions, such as overseer of the treasury, overseer of scribes of the king's document, overseer of the double granary and overseer of all royal works.

His mastaba is located at Saqqara. The entrance is on the South-east and decorated with two pillars. It follows a room with two further rooms on each side. The middle of the complex is occupied by a court with ten pillars. Going further north, several other rooms follow with one containing the false door of Ptahhotep and an offering table in front of it. Most walls of the mastaba are decorated with reliefs, but mostly only the lower parts of the scenes are preserved. They are mainly showing offerings bearers. The only family member preserved in the tomb decoration is the son Akhhotep. The name of the wife is not preserved.

This mastaba is actually a double mastaba. Ptah-Hotep seems to have held a very important position during the reign of Djedkare during the V Dynasty. Djedkare was the predecessor of Unas. Ptah-Hotep was self-described as a priest of Maat. Akhti-Hotep is thought to have been Ptah-Hotep's father. He was the vizier, chief of the treasury and the granary, as well as a judge.

This mastaba is smaller than the Mastaba of Ti, but is more interesting. The reliefs that are found inside are not all completed. The main corridor has reliefs on both sides. On the left are what appear to be preliminary drawings in red. Over the red are corrections in black made by the master artist. Other reliefs show fowl being carried by servants to Ptah-Hotep. 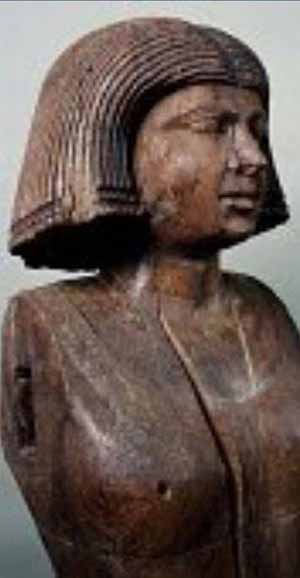 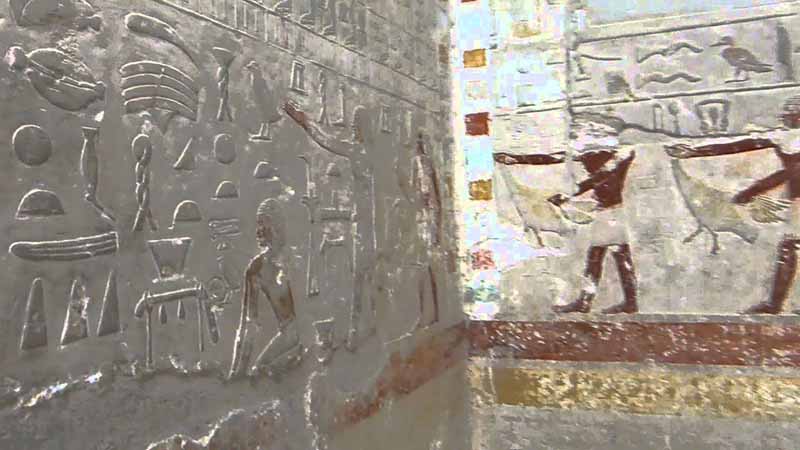 Mastaba of Idut (also called Sesheshet, a daughter of the 6th Dynasty pharaoh Teti), with the Step Pyramid of Djoser in the background. Princess Idut was Unas' daughter who was king of the Vth Dynasty. The reliefs are of good quality and in good condition. In the second chamber of the mastaba, there is a scene of hippo hunting. There are also scenes of men approaching the princess on shore. The scenes in other rooms are very typical of other offering scenes. 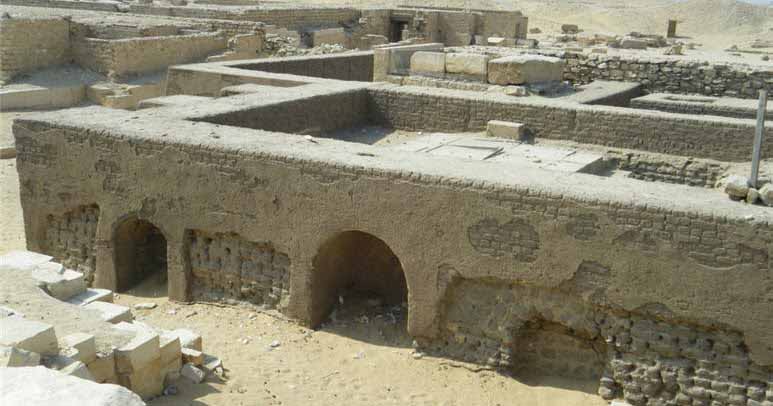 Nebet was an Egyptian Queen, the wife of King Unas. She lived during the time of the Fifth Dynasty of Egypt. She is held the mother of the Crown Prince Unas-ankh, though this fact is disputed. In addition to Unas Anch, Nebet may also be the mother of Khentkaues, Neferut, and Nefertkaues. Nebet was buried in a double mastaba with another queen, Khenut, next to the Pyramid of Unas in Saqqara. The mastaba was excavated by Peter Munro.

The mastaba is located north of the Pyramid of Unas. It is very well preserved and fascinating. There are three rooms in this tomb. The most interesting is the second room. It contains some scenes of Nebet in the harem, or women's quarters, in the palace, which is rare to be seen. A gallery can be reached through a doorway from the second room. This gallery's walls are beautifully decorated. 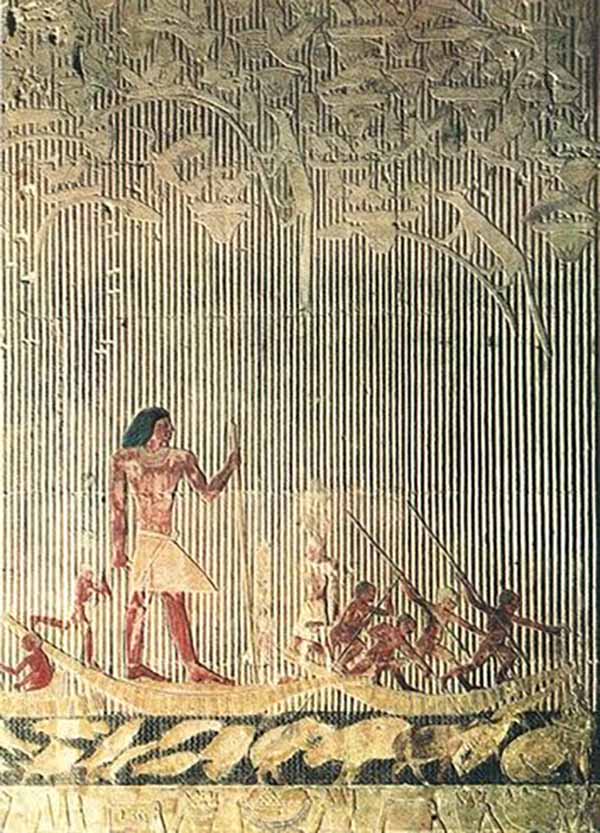 In 1865, Mariette discovered the mastaba of Ti. It has since been restored by the Egyptian Department of Antiquities. Ti was a hairdresser to the royalty during the early V Dynasty, as well as controller of the farms and stock that belonged to the royal family. His wife was related to the royal family so his children were referred to as royal descent. He was not given this title. In this tomb, his wife and eldest son were also placed although their remains were stolen along with the goods that were inside.

The mastaba was originally placed on top of the sand. It has sunk entirely into the sand it was placed on top of. The open court has a shaft that leads to the burial chamber. A narrow passageway leads into the burial chamber. The reliefs inside are close in quality and quantity to those in Ptah-Hotep's tomb, although there is much more of a variety of reliefs in Ti's tomb.

All of these passageways are decorated with impressive reliefs. The main hall has a small room that sits along one wall with three eye level holes so that the dead could witness the offerings that were part of the tomb rituals. Inside this room was a statue of Ti. The original is in the Egyptian Museum and a replica has been put in the room in its place.