Dunes are large masses of wind-blown sand, and are most common in deserted environments, such as the Sahara, and also near beaches. An area with dunes is called a dune system. In physical geography, a dune is a hill of loose sand built by aeolian processes (wind) or the flow of water. Dunes occur in different shapes and sizes, formed by interaction with the flow of air or water. Dunes can be natural, but also man-made (artificial). Most kinds of dunes are longer on the stoss (upflow) side, where the sand is pushed up the dune, and have a shorter "slip face" in the lee side. The valley or trough between dunes is called a slack. Read more


Surprising Discovery Reveals Sand Dunes 'Breathe' Water Vapor   Science Alert - March 31, 2022
Desert landscapes are not as lifeless as they look. Vast seas of sand dunes can not only grow, move, and interact with one another, a recent study suggests they can also 'breathe'. Using a super-sensitive probe that took decades to invent, researchers have shown sand dunes regularly inhale and exhale tiny amounts of water vapor. The inhales are harder to achieve when the sand is drier. But when the wind flows over the surface of a dune, it carries off the top layer, creating a rapid change in surface moisture and pressure. As a result, "evanescent waves of humidity" from the atmosphere above flow downward. The probe used to detect this flow is so sensitive to moisture, it can pick up tiny films of water on a single grain of sand. 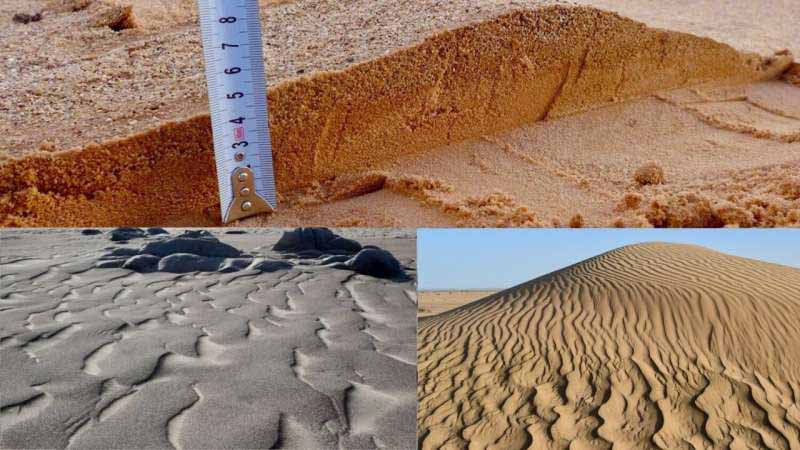 A team of researchers has analyzed an extensive collection of sand samples from so-called megaripple fields around the world and gained new insights into the composition of these sand waves. These could help settle debates about the mechanistic origin of some recently discovered enigmatic extraterrestrial sand structures and improve our ability to infer information about past weather and climate events from sediment records. Megaripples are sand waves with wavelengths in the meter range, between ordinary beach ripples (centimeters) and dunes (ten to 100 meters). They are commonly found on Earth and Mars. 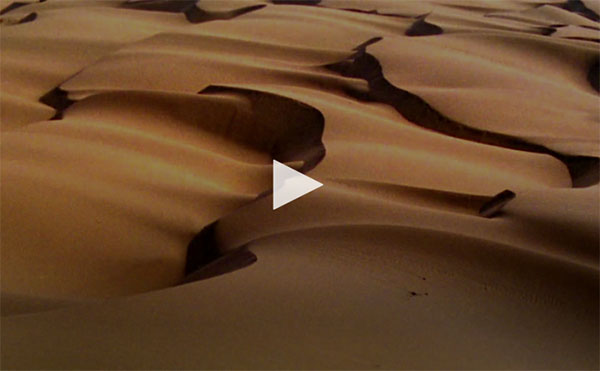 Video: How Sand Dunes Communicate with Each Other
Weather.com - February 6, 2020 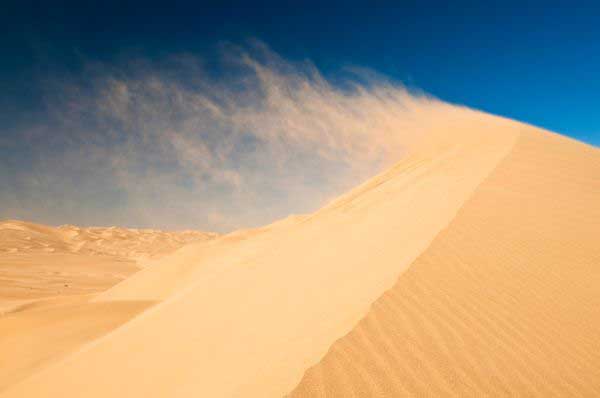 Singing Sand Dunes Explained -   National Geographic - November 1, 2012
When Marco Polo heard it in China, he suspected evil spirits. When residents of Copiapo, Chile, heard it emanating from a sandy hill, they dubbed the peak El Bramador, for its roars and bellows. Scientists today call it "singing sand," but they're all referring to the same thing: As sand grains shuffle down the slopes of certain sand dunes, they produce a deep, groaning hum that reverberates for miles. But how these dunes produce this "music" remains a much debated mystery. Another vexing question is why different dunes sing different tunes - and how can some even sing more than one note at a time?

A trio of Parisian biophysicists think they know the answer. It's not necessarily the motion of the sandy ocean that determines the pitch of the note - it's the size of the grains, though why the size matters is still unknown.

The researchers first tracked down a pair of singing dunes, one in Morocco, the other in Oman. Working literally by the seat of their pants, they scooted feet-first down the hills to trigger the avalanches. They found that, while the Moroccan hill moaned at a steady 105 - or a low G sharp - the Omani dunes sang a nine-note blare that ranged from 90 to 150 Hz.

With the sounds identified, the team packed their suitcases with 110 pounds (50 kilograms) of Moroccan sand and 220 pounds (100 kilograms) of Omani sand and hauled them back to their lab at Paris Diderot University. "If you want to make it sing, you need a lot," noted study leader Simon Dagois-Bohy.

In the lab, the team recreated the avalanches in miniature, analyzing the speed, depth, and makeup of the cascades. As it turns out, the one-note Moroccan sand grains are almost entirely the same size - 160 millionths of a meter, or microns acrossčbut the noisy Omani sands run the gamut, from 150 to 300 microns.

But when the messy sands were sieved down to just the 200-to-250 micron particles, the tone cleared into a single tone. "The size of the grain controls the actual sound," Dagois-Bohy concluded.

Why exactly this happens, and how the sound itself is created, is still uncertain. However, the Parisian group suspects that, during an avalanche, grains of sand move together down the dune - each grain colliding with and rolling around its neighbors, creating a constant stream of collisions. Larger grains of sand move around each other at slower rates, and vice versa for smaller grains.

Each bump makes a shock that, on its own, would be all but inaudible. But add them together in the right conditions, said study co-author Stephane Douady - and the team is still working out what those precise conditions actually are - and you get the sound of millions of little shocks.