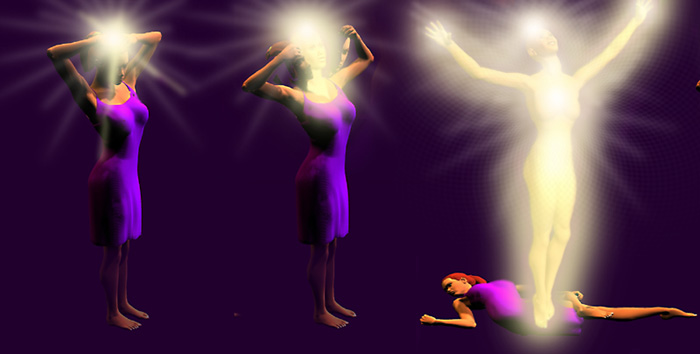 Samadhi is a term used in Hindu and Buddhist yogic meditation. Samadhi is also the Hindi word for a cenotaph, a structure commemorating the dead (akin to a tomb, but without remains).

Samadhi is a Sanskrit term for the practice which produces complete meditation (among "normal" one). According to Vyasa, "yoga is samadhi" deciphered as complete control (samadhana) over the functions of consciousness (better is it so Higher control, that it Release...).

The exact meaning and usage of the term varies among the Indian religious traditions (such as Hinduism and Buddhism) but its meaning is from 'sam', with (into), together + 'a' towards + 'dha' to bring (to get, to hold). The result is various degrees of veridical coalescent acquisition of truth (samapatti).


Samadhi is the state of being aware of one's Existence without thinking, in a state of undifferentiated - Beingness.

1. Laja Samadhi - is latent ("laja"), potential level of samadhi. It begins in deep meditation or Trance - even with movement such as dancing, etc. It is state of joy, deep and general well feeling (Wellness:), peaceful meditative state (also with income from source known as alpha level of brain«s work frequency)

2. Savikalpa Samadhi refers to the initial (beginning) state of full valued Samadhi. The mind is still present with work(ing), which is reason for word KALPA (sanKALPA) - which means imagination (sankalpa means wish, which is defined in this example as imagination with will to get it). VIKALPA means "against imagination", because this level of samadhi goes to quiet and open mind by overcoming work of mind - as imaginations are (more than) result of that work). So that level of Sankalpa leeds to the Truth among any binds of mind (which are mostly imaginations). SA means "with" by that way. So SAvikalpa SAMADHI means "Samadhi (upper meditation) with (tendency to) against or better AMONG imaginations.

3. Nir-vikalpa Samadhi (or Sahaja Samadhi) is the end result. There is no more KALPAs (imaginations, wishes or other products from work of the mind, because the mind is finally under control and in this case is quiet...).

In Savikalpa Samadhi we get the taste of Bliss and Beingness but are still attached fast to our erroneous identification with the body as well as to our numerous worldly attractions. There is the Truth to touch it, among all illusions, false meanings and opinions - among all imaginations...

Entering Samadhi in the beginning takes effort. Holding on to a state of Samadhi takes even more effort. The beginning stages of Samadhi are only temporary. But that "effort" does not mean that mind has to work more (as in concentration or so), but it means work to control the mind, to release self I.

Note, that normal levels of meditation (mostly the lower levels) can be hold near "automaticaly", as "being in the state of meditation" rather than "doing meditation". But that ability giving many positive results (including materially practical) is quit hard to obtain. It is recommended to find some (spiritual) Master, teach about "alpha level" (and higher levels of frequency of brain«s work) and so on...

Upon entering Nirvikalpa Samadhi the differences we saw before have faded and only one and the same Substance is seen with which we then gladly identify. In this condition nothing but pure Awareness remains and nothing is missing to take away from Wholeness and Perfection.

Samadhi is the only stable unchanging Reality. All else is ever changing and does not bring everlasting peace or happiness.Staying in Nirvikalpa Samadhi is effortless but even from this condition one must eventually return to ego-consciousness.

Otherwise, this highest level of Samadhi leads to NIRVANA, what means total Unity with logical end of individual form (end of personal soul and also death or dematerialization of the body). However, it is entirely possible to stay in Nirvikalpa Samadhi and yet be fully functional in this world. This condition is known as Sahaja Nirvikalpa Samadhi (sahaja means "spontaneous"). Only the true Enlightened (spiritual Masters and so on) can be Spontaneously Free.

Nirvikalpa Samadhi is achieved through the advanced and prolonged practice of Kriya Yoga or other forms of Yoga (or even nonYoga spiritual teaching) and is the state of oneness with the Atman - the true Soul (as entirely consciousness part of the God).In Nirvikalpa Samadhi, all attachment to the material world and all karma is dissolved.

All awareness is withdrawn step by step from the physical, astral and causal bodies until self-realization or oneness with the soul is achieved. During this process, breathing ceases, the heart stops beating. Aware and fully conscious oneness with soul is then achieved in a most loving way and all cells of physical body are flooded with the Ocean of Divine Love and Divine Bliss for any period of duration - hours, days, weeks until the individual shifts his awareness from the soul back to the physical body.

For being full functional in this word, he awareness stay in Connection with the Divine, but stay (back) in the body, which is than normally functional. But some "strange" conditions will be there - better health (near invulnerable), better feelings (even for other person who touches the body with soul atached to the Divine) and "miracles" only by presence, speech (wishes!) and gestures (doings) of the Divine person (also called the Enlighted).

Nirvikalpa Samadhi is a preparatory step to Maha Samadhi and serves as extreme uplifting of all body vibration (see above) and leads to complete healing of karmic wounds to the open doors to God and divine love for further progress on your way to God.

'Samadhi' is the main subject of the first part of Yoga Sutras called Samadhi-pada.

Maha Samadhi (literally great samadhi) is the Hindi word for a realized yogi's conscious departure from the physical body at death. Which is also known as Nirvana.

Maha Samadhi is the final conscious abandoning of the physical body. Every infinitesimal piece of attachment or karma is completely surrendered unto God and dissolved into the Divine Ocean of Love. The individual transcends to worlds beyond karma and returns to God to merge into God or Nirvana which literally menas "extinction" and/or "extinguishing" and is the culmination of the yogi's pursuit of liberation.

"In the Bhagavad Gita Krishna speaks about Samadhi and about principal stages of Nirvana: Nirvana in Brahman (the Holy Spirit) and Nirvana in Ishvara (the Creator).But in India the term ŇNirvanaÓ became widely used by Buddhists at some point in time and later on this term along with Buddhism, was Ňforced outÓ from India by Hindus. Instead of using the term ŇNirvanaÓ Hindu schools started to expand the meaning of the term ŇSamadhiÓ by adding to it various prefixes. Various schools used these composite words and because of this the term ŇSamadhiÓ got ŇdiffusedÓ and lost its unambiguity. This is why it makes sense to get back to accurate terminology that God introduced into spiritual culture through Krishna."

Samadhi in Bhakti The Vaishnava Bhakti Schools of Yoga define Samadhi as 'complete absorption in the object of one's love (Krishna)'. Rather than thinking of 'nothing', true samadhi is said to be achieved only when one has pure, unmotivated love of God. Thus even while performing daily activities a practitioner can strive for full samadhi within their heart. The Yogui is in MahaSamadhi before the dead and after the separation of the material body, he returns to a perfect state of trascendental bliss and eternal personal love with god... Which is in true "only" Nirvikalpa Samadhi, because the individual personality still exists (even so purified, that has etereal relationship with God as with a being at the same level...

Samadhi, or concentration of the mind, is the second of the three parts of the Buddha's teaching: sila or conduct, samadhi or samatha (concentration), and pnna (wisdom).

It has been taught by the Buddha using 40 different objects of meditation, such as mindfulness of breathing (anapanasati) and loving kindness (metta). Upon development of samadhi, one's mind becomes purified of defilement, calm, tranquil, and luminous.

Once the meditator achieves a strong and powerful concentration, his mind is ready to penetrate and see into the ultimate nature of reality, eventually obtaining release from all suffering. In the language of the eight-fold path, samatha is "right concentration".

Important components of Buddhist meditation, frequently discussed (1, 2) by the Buddha, are the successively higher meditative states known as the four jhanas. The Buddhist suttas mention that samadhi practitioners may develop supernormal powers (called 'siddhis'), and list several that the Buddha developed, but warn that these should not be allowed to distract the practitioner from the larger goal of complete freedom from suffering.