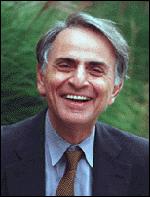 Carl Edward Sagan (November 9, 1934 Ŵ December 20, 1996) was an American astronomer and science popularizer. He pioneered exobiology and promoted the Search for ExtraTerrestrial Intelligence (SETI). He is world-famous for his popular science books and the television series Cosmos, which he co-wrote and presented. In his works he frequently advocated the scientific method.

Carl Sagan was born in Brooklyn, New York. His father, Sam Sagan, was a Jewish garment worker and his mother, Rachel Molly Gruber, was a housewife. Sagan attended the University of Chicago, where he received a bachelor's degree (1955) and a master's degree (1956) in physics, before earning his doctorate (1960) in astronomy and astrophysics. He taught at Harvard University until 1968, when he moved to Cornell University.

Sagan became a full professor at Cornell in 1971 and directed a lab there. He contributed to most of the unmanned space missions that explored our solar system. He conceived the idea of adding an unalterable and universal message on spacecraft destined to leave the solar system, that could be understood by any extraterrestrial intelligence that might find it. The first message that was actually sent into space was a gold-anodized plaque attached to the space probe Pioneer 10. He continued to refine his designs and the most elaborate such message he helped to develop was the Voyager Golden Record that was sent out with the Voyager space probes.

Sagan was among the first to hypothesize that Titan and Jupiter's moon Europa may possess oceans (a subsurface ocean in the case of Europa) or lakes. Thus making the hypothesized water ocean on Europa potentially habitable for life. Europa's subsurface ocean was later indirectly confirmed by the spacecraft Galileo.

He furthered insights regarding the atmosphere of Venus, seasonal changes on Mars, and Saturn's moon Titan. Sagan established that the atmosphere of Venus is extremely hot and dense. He also perceived global warming as a growing, man-made danger and likened it to the natural development of Venus into a hot life-hostile planet through greenhouse gases. He suggested that the seasonal changes on Mars were due to windblown dust, not to vegetation changes, as others had proposed.

Sagan was a proponent of the search for extraterrestrial life. He urged the scientific community to listen with large radio telescopes for signals from intelligent extraterrestrial lifeforms. He advocated sending probes to other planets. Sagan was Editor in Chief of Icarus (a professional journal concerning planetary research) for 12 years. He cofounded the Planetary Society and was a member of the SETI Institute Board of Trustees.

He was well known as a coauthor of the scientific paper that predicted nuclear winter would follow nuclear war. Sagan famously predicted that smoky oil fires in Kuwait (set by Saddam Hussein's army) would cause an ecological disaster of black clouds. Retired atmospheric physicist Fred Singer dismissed Sagan's prediction as nonsense, predicting that the smoke would dissipate in a matter of days.

Sagan believed that the Drake equation suggested that a large number of extraterrestrial civilizations would form, but that the lack of evidence of such civilizations (the Fermi paradox) suggests that technological civilizations tend to destroy themselves rather quickly. This stimulated his interest in identifying and publicizing ways that humanity could destroy itself, with the hope of avoiding such destruction and eventually becoming a space-faring species.

Sagan, a life-long follower of liberalism, became more politically active after marrying leftist Ann Druyan and performed acts of civil disobedience at nuclear weapons sites during the Nuclear Freeze era. He spoke out against President Ronald Reagan's Strategic Defense Initiative, or "Star Wars" program, which he felt was technically impossible to build and perfect, far more expensive to create than for an enemy to defeat through decoys and other means, and destabilizing to Cold War nuclear weapons disarmament progress.

Carl Sagan was an avid user of marijuana, although he never publicly admitted it during his life. Under the pseudonym "Mr. X," he wrote an essay concerning cannabis smoking in the 1971 book Marihuana Reconsidered, whose editor was Lester Grinspoon. In the essay Sagan commented that marijuana encouraged some of his works and enhanced experiences. After Sagan's death, Grinspoon disclosed this to Sagan's biographer Keay Davidson. When the biography, entitled Carl Sagan: A Life, was published in 1999, the marijuana exposure stirred some media attention.

Sagan's capability to convey his ideas allowed many people to better understand the cosmos. He delivered the 1977-1978 Christmas Lectures for Young People at the Royal Institution. He wrote (with Ann Druyan, eventually his third wife) and narrated the highly popular thirteen part PBS television series Cosmos (modeled on Jacob Bronowski's The Ascent of Man); he also wrote books to popularize science (The Dragons of Eden, which won a Pulitzer Prize, Broca's Brain, etc.) and a novel, Contact, that was a best-seller and had a film adaptation starring Jodie Foster in 1997. The film won the 1998 Hugo Award.

From Cosmos and his frequent appearances on The Tonight Show, Sagan became associated with the catch phrase "billions and billions." (He never actually used that phrase in Cosmos, but his distinctive delivery and frequent use of billions made this a favorite phrase of Johnny Carson and others doing the many affectionate impressions of him. Sagan took this in good humor, and his final book was entitled Billions and Billions - see below.) The humorous unit of the Sagan has now been coined to stand for any count of at least 4,000,000,000.

He wrote a sequel to Cosmos, Pale Blue Dot: A Vision of the Human Future in Space, which was selected as a notable book of 1995 by The New York Times. Carl Sagan also wrote an introduction for the best selling book by Stephen Hawking, A Brief History of Time.

Sagan presents a speculation concerning the origin of the swastika symbol in his book, Comet. Sagan hypothesized that a comet approached so close to Earth in antiquity that the jets of gas streaming out of it were visible, bent by the comet's rotation. The book Comet reproduces an ancient Chinese manuscript that shows comet tail varieties; most are variations on simple comet tails, but the last shows the comet nucleus with four bent arms extending from it, showing a swastika.

Sagan caused mixed reactions among other professional scientists. On the one hand, there was general support for his popularization of science, his efforts to increase scientific understanding among the general public, and his positions in favor of skepticism and against pseudoscience.

On the other hand, there was some unease that the public would misunderstand some of the personal positions and interests that Sagan took as being part of the scientific consensus rather than his own personal views, and there was some unease, which some believe to have been motivated in part by professional jealousy, that scientific views contrary to those that Sagan took (such as on the severity of nuclear winter) were not being sufficiently presented to the public.

His comments on the Kuwait oil well fires during the first Gulf War were shown later to be in error; Sagan himself acknowledged his error in print.Late in his life, Sagan's books developed his skeptical, naturalistic view of the world.

In The Demon-Haunted World: Science as a Candle in the Dark, he presented tools for testing arguments and detecting fallacious or fraudulent ones, essentially advocating wide use of the scientific method.

In The Demon-Haunted World, Sagan gave a list of errors he had made (including his predictions about the effects of the Kuwaiti oil fires) as an example of how science is self-correcting.

The compilation Billions and Billions: Thoughts on Life and Death at the End of the Millennium, published after Sagan's death, contains essays written by Sagan, such as his views on abortion, and Ann Druyan's account of his death as a non-believer.

In 1994, Apple Computer began developing the Power Macintosh 7100. They chose the internal code name "Carl Sagan," in honor of the astronomer.

Though the project name was strictly internal and never used in public marketing, when Sagan learned of this internal usage, he sued Apple Computer to use a different project name - other projects had names like "Cold fusion" and "Piltdown Man", and he was displeased at being associated with what he considered pseudoscience.

Though Sagan lost the suit, Apple engineers complied with his demands anyway, renaming the project "BHA" (Butthead Astronomer). Sagan sued Apple for libel over the new name, claiming that it subjected him to contempt and ridicule. Sagan lost this lawsuit as well; still, the 7100 saw another name change: it was now called "LAW" (Lawyers Are Wimps).

Sagan is regarded by most as an atheist or agnostic, observing statements such as: "The idea that God is an oversized white male with a flowing beard who sits in the sky and tallies the fall of every sparrow is ludicrous. But if by 'God' one means the set of physical laws that govern the universe, then clearly there is such a God. This God is emotionally unsatisfying... it does not make much sense to pray to the law of gravity."

Sagan married three times; the famous biologist Lynn Margulis (mother of Dorion Sagan) in 1957, artist Linda Salzman (mother of Nick Sagan) in 1968, and author Ann Druyan (mother of Sasha and Sam) in 1981, to whom he remained married until his death.

After a long and difficult fight with myelodysplasia, Sagan died at the age of 62, on December 20, 1996, at the Fred Hutchinson Cancer Research Center in Seattle, Washington. Sagan was a significant figure, and his supporters credit his importance to his popularisation of the natural sciences, opposing both restraints on science and reactionary applications of science, defending democratic traditions, resisting nationalism, defending humanism, and arguing against geocentric and anthropocentric views.

The landing site of the unmanned Mars Pathfinder spacecraft was renamed the Carl Sagan Memorial Station in honor of Dr. Sagan on July 5, 1997. Asteroid 2709 Sagan is also named in his honor.

The 1997 movie Contact, based on Sagan's novel of the same name, and finished after his death, ends with the dedication "For Carl."In an episode of Star Trek: Enterprise, a quick shot is shown of the relic rover Sojourner, part of the Mars Pathfinder mission, placed by a historical marker at Carl Sagan Memorial Station on the Martian surface. The marker displays a quote from Sagan: "Whatever the reason you're on Mars, I'm glad you're there, and I wish I was with you."