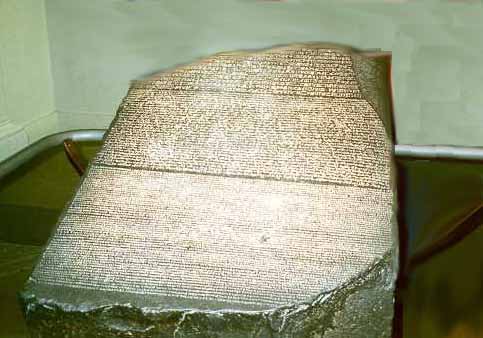 The Rosetta Stone is 3 feet 9 inches long and 2 feet 41/2 inches wide - (114x72x28cm). It is dark grey-pinkish granite stone (originally thought to be basalt in composition) with writing on it in two languages, Egyptian and Greek, using three scripts, Hieroglyphic, Demotic Egyptian and Greek. Because Greek was well known, the stone was the key to deciphering the hieroglyphs. 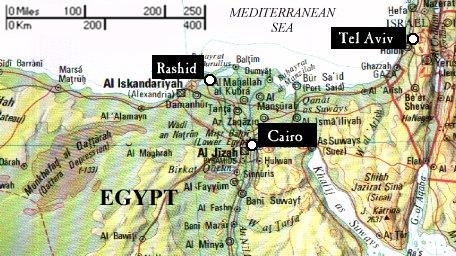 The Rosetta stone is dated to March 196 BC, in the 9th year of Ptolemy V. The background to the setting up of the stela was the confirmation of the control of the Ptolemaic kings over Egypt. The Ptolemies were Greeks who had been ruling Egypt since the fragmentation of the Empire of Alexander the Great, and while they built temples in the Egyptian style, their lifestyle and language remained exclusively Greek. Egypt had by now become a multi-cultural society, a mixture of Greek and Egyptian, although in many parts of the country the two rarely met.

In the years preceding the setting up of the Rosetta Stone, control of certain parts of Egypt had been lost to the family of the Ptolemies, and it had taken the Ptolemaic armies some time to put down opposition in the Delta; parts of southern Upper Egypt, particularly Thebes, were not yet back in the control of the government. It appears that it was decided that the best way to emphasise the legitimacy of the 13 year old Ptolemy V in the eyes of the Egyptian elite was to re-emphasise his traditional royal credentials with a coronation ceremony in the city of Memphis, and to affirm his royal cult throughout Egypt. This second aim was done through a series of priestly decrees, of which the Rosetta Stone is by far the best-known example. It is a version of the decree issued at the city of Memphis; others include the Canopus decree in the Egyptian Museum in Cairo.

The inscription begins with praise of Ptolemy, and then includes an account of the siege of the city of Lycopolis (a town in the Delta, not identified with certainty), and the good deeds done by the king for the temples. The final part of the text describes the decree's overriding purpose, the establishment of the cult of the king. For example, it stipulates how the priests shall maintain the cult of the king ('...the priests shall pay homage three times a day...'), how the king's shrine is to be set up ('...there shall be set upon the shrine the ten gold crowns of the king...'), and days when certain festivals, such as the king's birthday, shall be celebrated. It ends by saying that it is to be made known that all the men of Egypt should magnify and honour Ptolemy V, and that the text should be set up in hard stone in the three scripts which it still bears today.

The Egyptians had used hieroglyphic script for nearly 3,500 years, from 3100 BC until the end of the fourth century AD. At about the turn of the third century AD the Egyptians began to write their languages in a script composed of the Greek alphabet, to which were added seven characters derived ultimately from hieroglyphs. In this form the languages came to be known as Coptic, no doubt a corruption of the Greek word Aiguptios. Knowledge of how to read and write the hieroglyphic script was probably lost soon after it had been superseded and no key to its meaning was found until the discovery of the Rosetta Stone. The deciphering began with the work of the British physicist Thomas Young. He showed that both the demotic and hieroglyphic writing contained both alphabetic and symbolic elementswhich were closely related.

French Captain Pierre-Francois Bouchard (sometimes spelled Boussard) (1772-1832) discovered the stone in the Egyptian port city of Rosetta (present-day Rashid) on July 15, 1799. Some scientists accompanied Napoleon's French campaign in Egypt (1798-1801). After Napoleon Bonaparte founded the Institut de l'Egypte in Cairo in 1798 some 50 became members of it. Bouchard found a black stone when guiding construction works in the Fort Julien near the city of Rosetta. He immediately understood the importance of the stone and showed it to General Abdallah Jacques de Menou who decided that it should be brought to the institute, where it arrived in August, 1799.

In 1801 the French had to surrender. A dispute arose about the results of the scientists - the French wishing to keep them, while the British considered them forfeit in the name of King George III. The French scientist Etienne Geoffroy Saint-Hilaire, writing to the English diplomat William Richard Hamilton, threatened to burn all their discoveries, ominously referring to the burned Library of Alexandria. The British gave in and insisted only on the delivery of the monuments. The French tried to hide the Rosetta Stone in a boat despite the clauses of the capitulation, but failed. The French were allowed to take the imprints they had made previously, when embarking in Alexandria. When it was brought back to Britain, it was presented to the British Museum, where it has been kept since 1802.

In 1814 Thomas Young finished translating the enchorial (demotic) text, and went on to work on the hieroglyphic alphabet.

In 1822 French Egyptologist Jean Francois Champollion, with the aid of the Coptic language (language of the Christian descendants of the ancient Egyptians) - succeeded in realizing the phonetic value of the hieroglyphs. This proved the fact that hieroglyphs do not have only symbolic meaning, but that they also served as a "spoken language". The stunning realization that the stone contained the same passage written three times in three different languages allowed it be become and ancient Code Book.

Champollion greatly expanded his research from 1822-1824 and is known as the translator of the Rosetta Stone.

"Rosetta Stone" is also used as a metaphor to refer to anything that is a critical key to a process of decryption, translation, or a difficult problem.