A penis carved carefully in stone was recently found near Hadrian's Wall in the United Kingdom   Science Alert - June 11, 2022

Charms, amulets, and necklaces decorated with a penis motif were commonly worn by people in the Roman civilization to improve fertility and ward away evil spirits and bad luck. Even children at this time were running around sporting little gold rings bearing male genitalia. 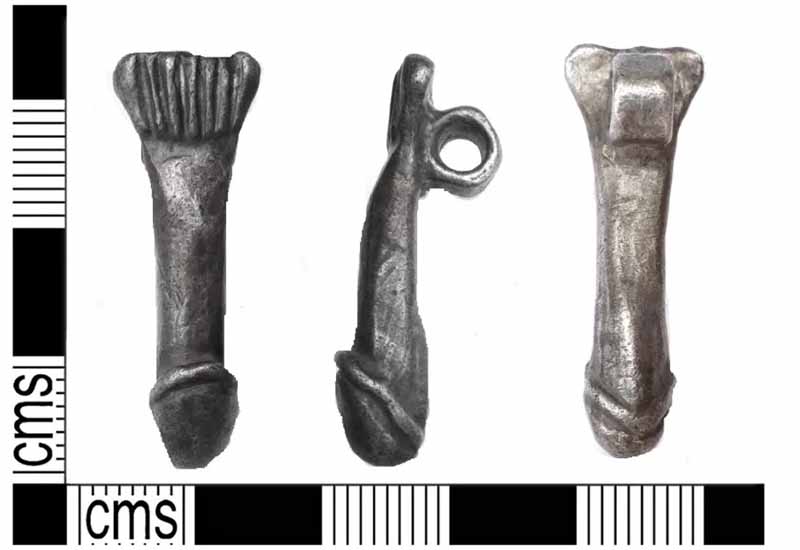 A metal detectorist recently discovered a silver, penis-shaped pendant in Kent, England that was likely worn around the neck to protect a person from misfortune around 1,800 years ago. Ancient Roman writers such as Marcus Terentius Varro (lived 116 B.C. to 27 B.C.) and Pliny the Elder (A.D. 23 to 79) mention how the phallus and representations of it are thought to have had the power to protect a person from evil. Many depictions of the phallus have been found throughout the Roman Empire and scholars often believe that they were created to avoid bad luck. The pendant (also called an amulet) is about 1.2 inches (3.1 centimeters) long, with a tiny ring at the top for a string (necklace) to go through. It dates back to a time when the Romans controlled England, between A.D. 42 and 410.


Lead found in ink used to write scrolls buried by eruption of Mount Vesuvius   PhysOrg - March 22, 2016
For several hundred years, before the dangers of lead were known, lead and other metals were added to ink to aid in color improvement, binding and consistency. But until now, it was believed this practice didn't start until approximately the fourth or fifth centuries AD - prior to then, inks were primarily carbon based. In this new effort, the researchers were studying scrolls that were charred and then covered when Mount Vesuvius erupted in 79 AD, burying the town, and of course nearby Pompeii as well.


Ancient scrolls give up their secrets   BBC - March 21, 2016
Metallic ink was used to inscribe scrolls regarded as an archaeological wonder, according to scientists. The discovery pushes back the date for the first use of metallic ink by several centuries. The Herculaneum scrolls were buried by the eruption of Mount Vesuvius in AD79 and are charred and fragile. Previous efforts to read them, over many centuries, has damaged or destroyed some of the scrolls. The task of reading the surviving scrolls has fallen to scientists using technology such as the European synchrotron, which produces X-rays 100 billion times brighter than the X-rays used in hospitals. Last year, physicists used the 3D X-ray imaging technique to decipher writing in the scrolls. The scrolls are the only library known to have survived from classical times