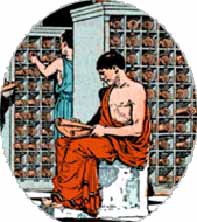 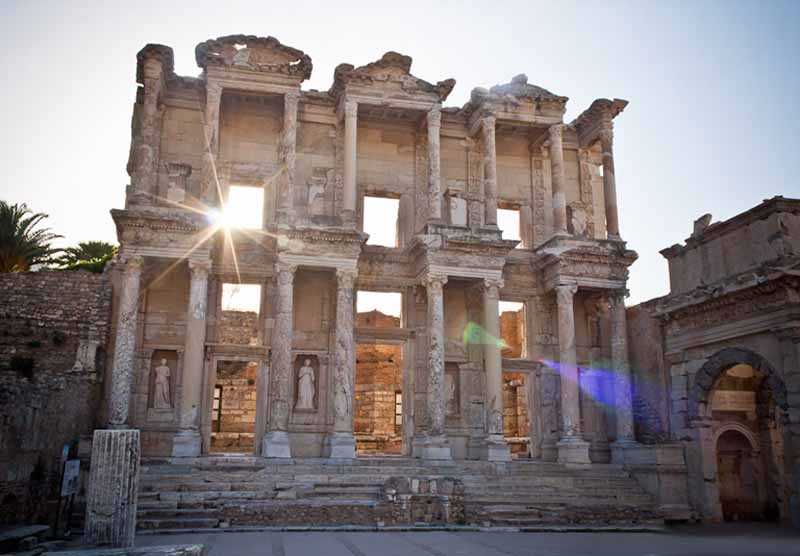 The library of Celsus is an ancient Roman building in Ephesus, Turkey,
built in honor of the Roman Senator Tiberius Julius Celsus Polemaeanus and completed in 135 AD.


Romans valued not just the scientific but also the educational and entertainment aspects of literature. As a result, having your own library was a status symbol for Roman citizens, and public libraries also arose in ancient Rome for the use of the people. Knowledge is power - and this saying has generally been reflected in the typical architecture of libraries as a temple of knowledge. Julius Caesar had projected a grand Greek and Latin style library, but he was killed before the project got underway. 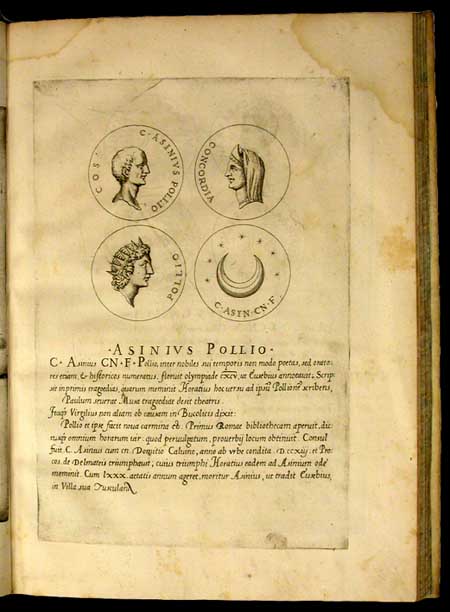 The first public library in Rome was finally founded by Asinius Pollio. From the spoils of the war he constructed and erected the library in the Atrium Libertatis, which he adorned with statues of the most celebrated heroes as well as other famous works of art all open to the public. The library had Greek and Latin wings, and reportedly its establishment posthumously fulfilled one of Caesar's ambitions. Pollio retired into private life as a patron of literary figures and became a writer. He was known as a severe literary critic, fond of an archaic style and purity.

In retirement, Pollio organized literary readings where he encouraged authors to read their own work, and he was the first Roman author to recite his own works. One of the most dramatic such readings brought the poet Virgil to the attention of the imperial family, when Virgil read from his work-in-progress the Aeneid, and flattered the imperial family by his portrayal of Aeneas, whom the Julii Caesares believed to be their direct patrilineal ancestor. As a result, Virgil was praised by Augustus himself. 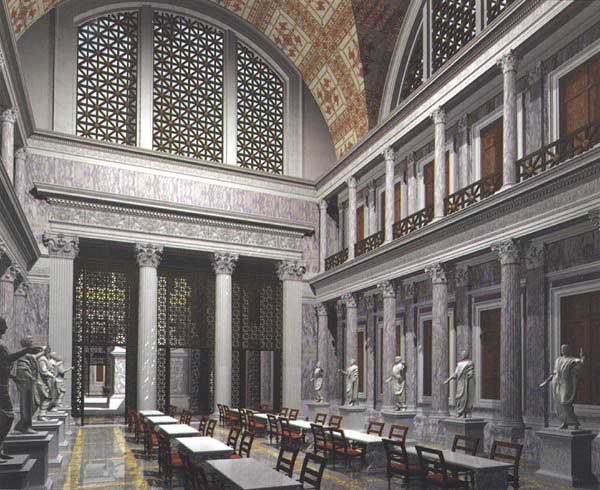 The library of Pollio was followed by that of Augustus in the Temple of Apollo on the Palatine Hill, another, the Bibliotheca Octaviana (so called from Augustus's sister Octavia), forming part of the Porticus Octavia. There were also libraries on the Capitol, in the Temple of Peace founded by Vespasian, in the palace of Tiberius, besides the Ulpian Library (so called after its founder, Trajan), which was the most famous. This library was attached by Diocletian, as an ornament, to his thermae. Private collections of books were made at Rome soon after the Second Punic War, sometimes from the spoils of Grecian or Eastern conquest.

Thus Aemilius Paulus brought to Rome the library of Perseus, king of Macedonia; Sulla, that of Apellicon of Teos; Lucullus, the extensive one of the kings of Pontus, to which he gave the public free access.

The zeal of Cicero, Atticus,Varro, and others in increasing their libraries is well known. Scholar Serenus Sammonicus possessed a personal library of 62,000 books. Towards the end of the Republic it became, in fact, the fashion to have a room elegantly furnished as a library, and reserved for that purpose. However illiterate a person might be, it was fashionable to appear learned by having a library, though he might never be able to read any of the books.


The Library of Alexandria, in Egypt, was the largest and most significant great library of the ancient world. It flourished under the patronage of the Ptolemaic dynasty and functioned as a major center of scholarship from its construction in the 3rd century BC until the Roman conquest of Egypt in 30 BC. The library was conceived and opened either during the reign of Ptolemy I Soter (323-283 BC) or during the reign of his son Ptolemy II (283-246 BC). An early organization system was in effect at Alexandria.

Private or personal libraries made up of written books (as opposed to the state or institutional records kept in archives) appeared in classical Greece in the 5th century BC. The celebrated book collectors of Hellenistic Antiquity were listed in the late 2nd century in Deipnosophistae. All these libraries were Greek; the cultivated Hellenized diners in Deipnosophistae pass over the libraries of Rome in silence.

By the time of Augustus there were public libraries near the forums of Rome: there were libraries in the Porticus Octaviae near the Theatre of Marcellus, in the temple of Apollo Palatinus, and in the Bibliotheca Ulpiana in the Forum of Trajan. The state archives were kept in a structure on the slope between the Roman Forum and the Capitoline Hill.

Private libraries appeared during the late republic: Seneca inveighed against libraries fitted out for show by illiterate owners who scarcely read their titles in the course of a lifetime, but displayed the scrolls in bookcases (armaria) of citrus wood inlaid with ivory that ran right to the ceiling: "by now, like bathrooms and hot water, a library is got up as standard equipment for a fine house (domus).

Libraries were amenities suited to a villa, such as Cicero's at Tusculum, Maecenas's several villas, or Pliny the Younger's, all described in surviving letters. At the Villa of the Papyri at Herculaneum, apparently the villa of Caesar's father-in-law, the Greek library has been partly preserved in volcanic ash; archaeologists speculate that a Latin library, kept separate from the Greek one, may await discovery at the site.

In the West, the first public libraries were established under the Roman Empire as each succeeding emperor strove to open one or many which outshone that of his predecessor. Unlike the Greek libraries, readers had direct access to the scrolls, which were kept on shelves built into the walls of a large room. Reading or copying was normally done in the room itself. The surviving records give only a few instances of lending features. As a rule, Roman public libraries were bilingual: they had a Latin room and a Greek room. Most of the large Roman baths were also cultural centres, built from the start with a library, a two room arrangement with one room for Greek and one for Latin texts.

Libraries were filled with parchment scrolls as at Library of Pergamum and on papyrus scrolls as at Alexandria: the export of prepared writing materials was a staple of commerce. There were a few institutional or royal libraries which were open to an educated public (such as the Serapeum collection of the Library of Alexandria, once the largest library in the ancient world), but on the whole collections were private. In those rare cases where it was possible for a scholar to consult library books there seems to have been no direct access to the stacks. In all recorded cases the books were kept in a relatively small room where the staff went to get them for the readers, who had to consult them in an adjoining hall or covered walkway. 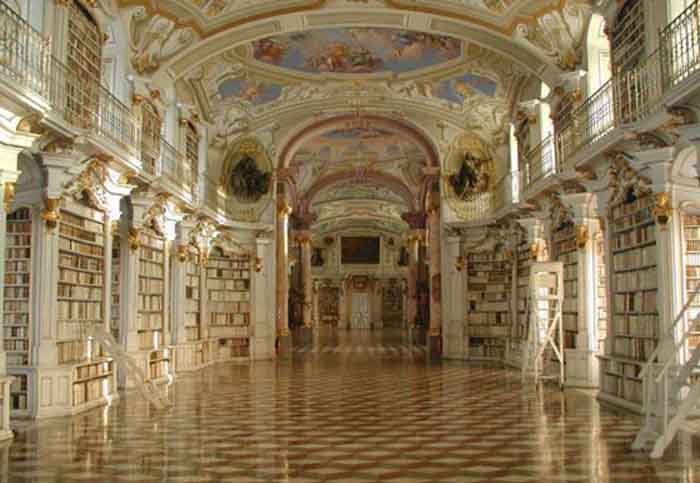 From the 15th century in central and northern Italy, libraries of humanists and their enlightened patrons provided a nucleus around which an "academy" of scholars congregated in each Italian city of consequence.

Cosimo de Medici in Florence established his own collection, which formed the basis of the Laurentian Library.

In Rome, the papal collections were brought together by Pope Nicholas V, in separate Greek and Latin libraries, and housed by Pope Sixtus IV, who consigned the Bibliotheca Apostolica Vaticana to the care of his librarian, the humanist Bartolomeo Platina in February 1475.

In the 16th century Sixtus V bisected Bramante's Cortile del Belvedere with a cross-wing to house the Apostolic Library in suitable magnificence.

The 16th and 17th centuries saw other privately endowed libraries assembled in Rome: the Vallicelliana, formed from the books of Saint Filippo Neri, with other distinguished libraries such as that of Cesare Baronio, the Biblioteca Angelica founded by the Augustinian Angelo Rocca, which was the only truly public library in Counter-Reformation Rome; the Biblioteca Alessandrina with which Pope Alexander VII endowed the University of Rome; the Biblioteca Casanatense of the Cardinal Girolamo Casanate; and finally the Biblioteca Corsiniana founded by the bibliophile Clement XII Corsini and his nephew Cardinal Neri Corsini, still housed in Palazzo Corsini in via della Lungara. The Republic of Venice patronized the foundation of the Biblioteca Marciana, based on the library of Cardinal Basilios Bessarion.

In Milan Cardinal Federico Borromeo founded the Biblioteca Ambrosiana. This trend soon spread outside of Italy, for example Louis III, Elector Palatine founded the Bibliotheca Palatina of Heidelberg. These libraries don't have as many volumes as the modern libraries. However, they keep many valuable manuscripts of Greek, Latin and Biblical works.