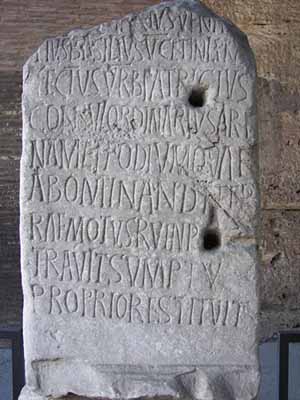 The native language of the Romans was Latin, an Italic language the grammar of which relies little on word order, conveying meaning through a system of affixes attached to word stems. Its alphabet was based on the Etruscan alphabet, which was in turn based on the Greek alphabet. Although surviving Latin literature consists almost entirely of Classical Latin, an artificial and highly stylized and polished literary language from the 1st century BC, the spoken language of the Roman Empire was Vulgar Latin, which significantly differed from Classical Latin in grammar and vocabulary, and eventually in pronunciation.

While Latin remained the main written language of the Roman Empire, Greek came to be the language spoken by the well-educated elite, as most of the literature studied by Romans was written in Greek. In the eastern half of the Roman Empire, which later became the Byzantine Empire, Latin was never able to replace Greek, and after the death of Justinian, Greek became the official language of the Byzantine government. The expansion of the Roman Empire spread Latin throughout Europe, and Vulgar Latin evolved into dialects in different locations, gradually shifting into many distinct Romance languages.

Although Latin is an extinct language with very few remaining fluent speakers, it remains in use in many ways, such as through Ecclesiastical Latin, the traditional language of the Roman Catholic Church and the official language of the Vatican City. Additionally, even after fading from common usage Latin maintained a role as western Europe's lingua franca, an international language of academia and diplomacy. Although eventually supplanted in this respect by French in the 19th century and English in the 20th, Latin continues to see heavy use in religious, legal, and scientific terminology - it has been estimated that 80% of all scholarly English words derive directly or indirectly from Latin.


Ancient civilizations made the discovery that ideas could be represented by standard symbols that could be written down, painted on a surface, or pressed into wet clay somewhere between 5,000 and 6,000 years ago. The Sumerians used a stick whose cross section had either three or four sides to write their cuneiform letters on moist clay tablets that were later baked.

Later, the Egyptians and Greeks used a mallet and chisel to write on stone and a reed pen to write on papyrus and specially scraped and prepared cow and sheep skins. Hieroglyphs were pictorial symbols of objects and animals from the Egyptian's everyday life. They were often richly detailed and painted by the writer. It was important to the Egyptians that their written language was beautiful and the symbols were grouped in an arrangement pleasing to the eye. Their order was quite flexible and they could be read from right to left, left to right, and from top to bottom. The Greeks inherited their alphabet from one brought to their islands by Phoenician traders.

By this time, many of the letters they used were ones we would recognize today and some even had the same sounds associated with them.

The Roman alphabet was derived largely from the Greek and was almost the same as the one we use today. There are some important differences, though, that can cause a lot of confusion for someone who wishes to casually study the language or read coin inscriptions.

Romans wrote only in uppercase or capital letters with beautifully proportioned straight lines, curves, and angles until quite late in their history. In fact, the uncials or lower case letters were a medieval invention and are seen beginning in the Fifth and Sixth Centuries, with a few examples dating a little earlier. Good examples of the fine style of Roman capital letters can be seen in the inscriptions carved with mallet and chisel into stone monuments.

In addition, there was no "J" in ancient Latin and the "U" was seldom seen and usually follows a "V" . The Romans wrote an "I" where we might write a "J" and pronounced it as a consonant with a "yuh" sound in these places. The "V" stood for our "U" and made a "W" sound where we might make the "V" sound reading the word in modern English.

Though the inscriptions on stone monuments were usually impeccably neat, the ones found on coins ranged from beautifully proportioned to abysmally sloppy. It often depended on how much care the ancient celator or die maker put into his work.

Also, when the coins were struck, they were sometimes near melting temperature and the letters seem like they have begun to flow or have been pulled along the surface of the coin. Often you will find greatly exaggerated serifs, the pointed finishing touches that adorned the ends of the strokes (the highly flared ends of the arms of an "X" , for example).

During the early Roman Empire, a revolutionary change in the form of books and other written records was taking place. Though it does not seem at first glance to be such an important innovation, the changeover from books in the form of a rolled manuscript to a book that was bound along one edge was nothing short of earthshaking.

For the first time in history, a reader could flip through the pages of a book instead of laboriously rolling a scroll from one hardwood stick onto the other in order to find the particular place in the text he or she was looking for. This saved the reader hours when it came to looking up information.

It also made it easier to keep written financial and legal records as well as account books of all kinds. This new format for the printed word was also more portable.

The pieces of cowhide used to make parchment could be much smaller now and the finished book was of a size that was a lot easier to carry around.

Binding the pages together in this way made it possible to include a table of contents that would directly reference a chapter or an item of interest to a page number.

A very similar revolution occurred 1900 years later when computers switched over from magnetic and paper tape readers to disk drives that could access any information anywhere on the disk and fetch pieces of information in any order needed.

Both the invention of the bound book and the computer disk drive served to speed up human access to information by a factor of several hundred.

This multimedia title you are now using is the latest innovation in the ongoing evolution of books.

Indexes, cross referencing, and information searching are built into the document and are handled speedily by the computer with the user only having to click the mouse a few times or type in a few words to search for.

The old scrolls or rolled books were still popular even after the invention of the bound book. The word for scroll was VOLVMEN in Latin (the second 'V' makes a long 'U' sound) and the word for a bound book was CODEX. It is from these words that we get our own words for encyclopedia volume and law codes.

By the end of the Third Century, most books were of the CODEX kind with a few very ornate public documents still produced in the form of a VOLVMEN. In the pictures displayed in this section on writing, you can see both kinds being used by Romans, as well as the very handy wax tablet and stylus used for jotting down everyday notes and for schoolchildren's assignments.

For personal use and for short notes that would be erased later, they used small wax tablets. These were usually bound together on a leather thong or arranged to fold together like modern book covers or like an accordion.

The individual tablets were made of wood and had a raised edge, forming a shallow box. Into this box, molten wax was poured and allowed to cool with a smooth surface. This wax was usually a deep red or reddish brown in color.

A metal or bone STILVS (stylus) was used to write upon the tablet, the pointed end to make the letters and the flattened end to smooth over and "erase" writing that was no longer wanted. These folding tablets and styli were the standard writing materials for Roman schoolchildren. They went by many names. In Latin they were called cerae or codices.

In the Greek portion of the empire, they were called diptycha, trypticha, and other names which began with the Greek word for the number of individual tablets in the set.

The Romans loved to have their portrait painted or a mosaic portrait made of themselves holding a rolled book or a wax tablet and stylus, like the image at top right.

They felt that these articles symbolized the education and cultured background of those who were shown holding them.

For letter writing, there were different grades of papyrus, depending on whether it was an official imperial dispatch or a personal letter to a friend in a different province. The dry climate of Egypt was perfectly suited to preserving these ancient papyri as well as the parchment documents, though these tended to dry out and become brittle. The contents of some of the surviving documents found in Roman Egypt are much like letters that might be written today by those of us who found ourselves in similar circumstances.

These included a letter to a legionary commander recommending a man for recruiting into the army. A similar letter informing that an applicant was rejected because he did not pass the eye exam, and letters from soldiers to their families at home asking for money or whining because none had been sent them after their last letter home.

Surprisingly, the ink sometimes lasted longer than the parchment. The city of Herculaneum was destroyed by a volcanic mudflow from Mount Vesuvius in A. D. 79.

The damp, corrosive ash caused the leather and parchment scrolls to deteriorate so that they became like flaky, black carbon. However, the ink, of another shade of black, survived in very readable condition. If the scrolls could be unrolled with great care and without crumbling to powder, then the darker letters stood out and could be read and transcribed before the scroll disintegrated totally.