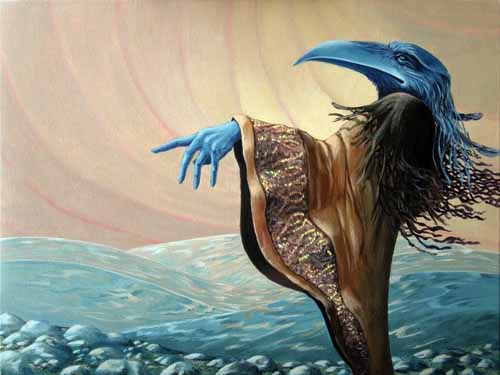 Ravens are common characters in the traditional narratives and mythology around the world, notably a part of North American, Siberian, and Norse mythology. Besides being the representative spirit of actual ravens, the raven in mythology is often depicted as a trickster or culture hero figure, or even as the creator of human beings.

The Norse God Odin relies on his two ravens to fly round the world every day and keep him informed. They are called Huginn and Muninn, representing thought and memory.

The raven also gets a reputation as a bird of ill omen in the story of Genesis. According to Hebrew folklore, Noah sends a white raven to check conditions while on the ark. It learns that the floodwaters are beginning to dissipate, but it does not immediately return with the news. It is punished by being turned black and being forced to feed on carrion forever.

In Ovid's Metamorphoses, a raven also begins as white before Apollo punishes it by turning it black for delivering a message of a lover's unfaithfulness. The raven's role as a messenger in Poe's poem may draw from those stories.


A raven is a prophet. Quote the Raven, "Nevermore".