Our genetic codes are changing. The human vehicle transplanting new DNA codes of light into our current genetic make-up to adjust to higher frequency consciousness..

The evolving human in our program is changing in many ways - consciousness, belief systems, self-awareness, physiology, etc.

This week we find an interesting story out of Australia laced with metaphors, such as blood and bloodlines.

The recipient of the organ transplant, 15 year old Demi-Lee Brennan, has inherited genetic material from the liver donor, altering her genetic codes. Demi's story made the news because her blood type changed from 0-negative to 0-positive. Great metaphors. 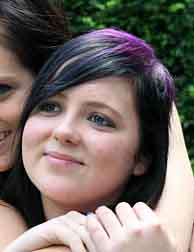 What are the odds that any transplant patient could end up like Demi Brennan of Sydney, Australia? Next to impossible. "I feel like a normal person," she said. She's 15 now, but six years ago she had a liver transplant - major surgery but pretty routine. What happened next, some people are calling a miracle. "We didn't believe her," said Dr. Stephen Alexander. "We thought that this was just too strange an occurrence to occur." Most patients have to take strong medications to prevent their bodies from rejecting donated tissue. But Demi's body not only accepted the donated liver, it actually adopted the immune system - even the blood type of the donor. "When it was first brought by the lab staff to my colleague and said 'this girl's blood group's gone from 0-negative to 0-positive,' first of all, we thought we must have made a mistake," said Hematologist Dr. Julie Curtin. It's never happened before. "We think she's a one-in-six-billion kind of a girl," Alexander said.

Somehow she did what doctors have been trying to do ever since they started performing transplants, get the body to stop trying to reject donated organs. "The holy grail of transplant was achieved and that's what we were trying to achieve for everybody, but Demi's body had done that herself," Curtin said. So now doctors will be studying her case to see if they can unlock the secrets of Demi's astonishing achievement. "It's my second chance at life," Demi said. She looks and says she feels just like any other healthy 15-year-old girl - purple hair, green nails ... and feeling in the pink.