Ralph and Ellie - All In The Family 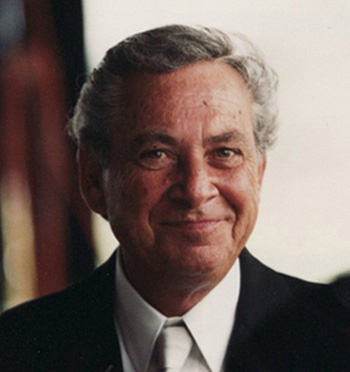 Last November, my ex-husband, Ralph, 67, the father of my 3 daughters, died, after a 3-month battle with esophageal cancer. I think I knew Ralph longer than anyone on this planet, remaining friends after our divorce, which had been my decision as the chapter of my life dealing with marriage and young children, ended.

Ralph moved to Arizona 12 years ago and eventually found a perfect partner to share his life, Linda, from New York, someone we all grew to love. Sadly, Linda, 50, lost her father unexpectedly to cancer one month before Ralph died, as if they were parallel experiences.

On the evening Ralph crossed over, November 13th, I saw Z with him so I knew it was time. As with the death of my best friend, Louise in December 1999, I went to Z and watched as he took Ralph out of his physical body.

This was a different experience for me than with Louise, as I saw myself in my soul essence, brilliant rays of colored light, alongside Z who looked the same. I must admit I was impressed.

As Z took Ralph out of his body, he looked up and recognized me. Not expecting to see me he asked, "Am I dead?"

And so Ralph's movement into consciousness awareness began.

Ralph never quite understood who I am, why I am here, my connection to Z, and other unexplained events that followed our lives during and after our marriage. Yet on some level, he had to know that Z was there, always guiding and protecting.

Most men Ralph's age, have no clue about metaphysics, and go to that cranky old man space when discussing it. It takes a physical event of major proportions to change their perspective.

People often get mean when they are afraid or are in pain, especially men who like to feel in control.

It is interesting that though Ralph was a skeptic about esoteric subjects, after he found out he had cancer, he asked me if his parents were around. They both died in the 1960's. It is then I realized something interesting. When I 'see' spirits' they look like holographic projections, much as we are. his is true for all psychics and mediums.

But when I see images of deceased people that look like flat two dimensional cardboard cutouts, I have come to understand that the consciousness of the person I am viewing is no longer in the grid. This does not mean that have incarnated back into this program in another role. In that case, souls aspects still appear holographic, based on the fact that we all experiencing multidimensionally. The flat screen effect means that their soul spark has reconciled back to source. That is how I saw Ralph's parents and brother, though I told him they were watching over him.

He surprised me by asking if they had any messages for him, but of course they didn't and I couldn't lie, especially about something that important, that touches the heart and soul. Ralph had always been very close to his mother and needed to connected. I believe he realized at that moment, that we can talk to those who have crossed over. I told him that she is watching and says hello.

Ralph had always said that no one knows me better than he did. There was no convincing him that he was wrong, that he only knew the 3D Ellie for a chapter of her life in which he played the major part as husband. It was a good marriage, as marriages go, lasting 20 years, after which we remained friends.

In our last conversation, just before he died, after knowing each other for 44 years, I asked, "Do you finally know who I really am?"

"I am not sure what you mean?" he answered, as I sensed him searching for an answer other than his usual thought patterns, thinking outside the box as soul begin their transition long before they completely cross over.

"You will soon find out," I replied before hanging up, knowing this would be our last conversation in 3D. He had already expressed that he did not want to do chemo and radiation and suffer. And so he didn't. He wasn't much for drama and was rarely sick. But ... he did smoke for 50 years and refused to quit until the end.

In the 3 months Ralph dealt with cancer, he kept a positive attitude, suddenly moving into my world, trying different holistic approaches. All were unsuccessful as the cancer was at an advanced stage when discovered. The holistic avenues bought him some time to live his life to the fullest before crossing over. He had some discomfort swallowing at the end, but spent the day playing golf with his friends and visiting my oldest daughter, Tracy, and her family, who live 5 minutes away. Of course she was his caretaker, along with Linda.

It is interesting that one cannot close their eyes and leave the physical body like many Yogis do, or the Atlanteans in another program of experience.

The doctors had given Ralph more time, but I knew it was his time to cross over the night he did.

And so Ralph crossed over and Ellie and Ralph began a new chapter in their relationship, one filled with interesting twists and turns, that still unfold.

Ralph came to me often in the days after he died, attending his funeral and allowing me to bring messages to his closest friends and family, who all know who I am and what I do. I guess it goes to your level of awareness, the need for drama, pain and suffering, directed at ... whomever you seek compassion from ... not to mention a fear of losing the physical body as the experience here is once. When one gets a prolonged illness, one must examine the unconscious motivations behind the soul's decision.

My daughters all talk to their dad every day and dream about him at times. They are all gifted and understand the journey of the soul.

As to Ellie and Ralph 2006, Ralph immediately wanted to work with me, but I told him he had lots to learn about the program. He was a bit miffed and moved on returning from time to time to tell me how he was helping the children and Linda instead. For Linda, it is the saddest of times. She goes to grief counseling. Her son moved from NY to AZ. to live near her, at least for now.

Sometimes Ralph pops in and watches me working at the computer. He always expresses that he can't believe the hours I spend on the files. It will be a while until he 'gets it'. He was not into computers, either.

There have been many humorous encounters with Ralph and I over the past 2 months, and perhaps I will write about them as they continue to unfold. Take for example ... last night as I sat at my computer and Ralph popped in.

"Do you remember what tomorrow is?" he asked. I was always the one who remembered special dates and events, Ralph being a typical male, having to be reminded.

I stopped typing and searched for the answer!

I called my daughter Zsia, in New Jersey, and told her the story.

Zsia had a more interesting story for me. The night before, she dreamed about meeting her dad. They were seated at a table somewhere, and he was telling her that he was not dead. He kept insisting on it. He said he came out of his body, like Mission Impossible, and swam underwater for what seemed like a long time, finally arriving at the Verrazano Bridge where I was waiting. (Ralph was always a strong swimmer.) He kept insisting that he was still alive, though we understand that he means he is still connected to us at some level of reality.

Ralph is far from 'gone'. He was a colorful character in life and will remain as such in death. Before the funeral he came to me and said, "When we married they said, 'till death do us part'. That is not true. We are still together."

Ellie and Ralph at Nikki and Ryan's Wedding 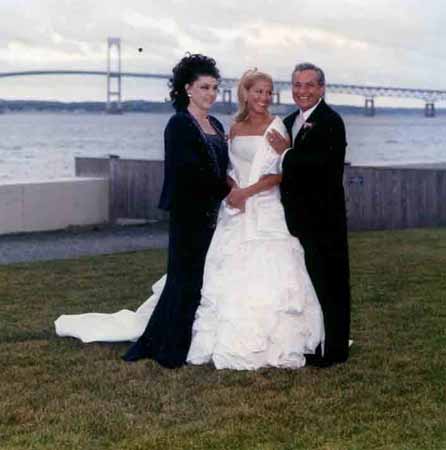 
Ralph's Continuing Adventures on the Other Side 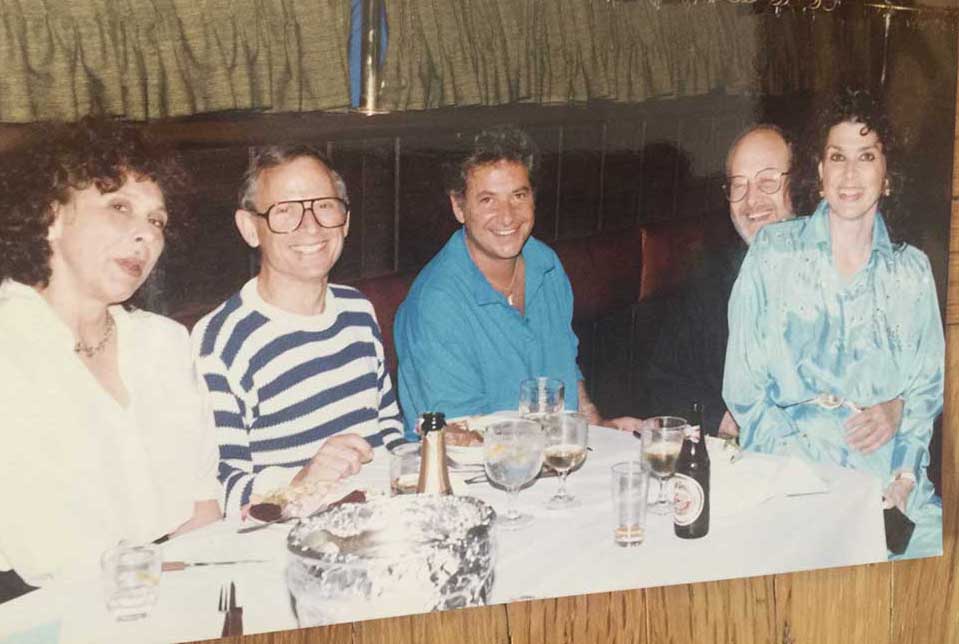 Today would have been the 81st birthday of my ex-husband Ralph (blue shirt). We remained friends after the divorce though he didn't understand my journey until it was time for him to cross over in 2005. Since then, Ralph has been a very busy spirit always visiting the family - generally on his birthday and our anniversary. He also helped his sister, Sydelle, cross over a few years ago.

As my children are all psychically gifted they know when Ralph is around as do their spouses. We have also experienced shared dreams with him, meaning we dream the same or connected situations at the same time.

This morning my son-in-law Jon emailed, "We had dinner out with friends last night. I looked over at our waiter's name tag and it read "Ralph". That's a sign he was with us !" My daughter Tracy, Joie's Mom, also had an experience with Ralph the other day as she was guided to one of his favorite restaurants in AZ and felt his presence. Nikki and Ryan knew he was with them in Israel two weeks ago.


Fifty years ago on this date...

This morning I picked a pair if gold earrings that Ralph gave me ing ago, and wasn't sure why I was guided to that choice. As I was posting my blog, who should show up but Ralph - my ex-husband, now deceased and a "frequency flyer" when it comes to visiting those of us left behind. So why was Ralfie here?

He wanted to remind me that 50 years ago today, on January 26, 1963, we got married - the only marriage for each of us. He always was a romantic. I also smelled flowers his favorite flowers to give me especially on Valentine's Day.

Tonight the football Giants beat the San Francisco 49ers with a cliff-hanger ending in overtime. As the game started I smelled cigarette smoke and knew at once it was my deceased ex-husband Ralph, back again. When we were married we watched football with the girls. We even watched a Giant game when I was in labor with oldest my daughter Tracy.

So there was Ralph telling me he came to watch the game with me and confirming what I already blogged, that the Giants would win. I told him he could stay if he stopped smoking up my office, and that I would also be updating my files, which he reluctantly agreed to. (He was never into computers and 50 years of smoking did him in).

Somewhere around half time, my friend Mallory called. Not to say we talked long, but after a few minutes Ralph grumbled, "Do you have to talk to your friends while we're watching the game?!" Whoa ! My consciousness instantly shot back to the days we were married. I told Mallory what Ralph said and we both laughed. And this is why I remain single.