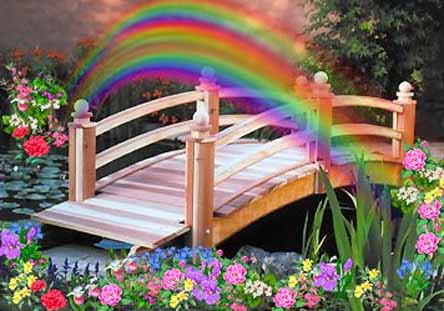 Reality is a consciousness hologram set in linear time to experience emotions. It is laced with metaphors to help bridge the gap between reality and illusion. The goal is the return to conscious awareness about who you are and why you are here.

Reality is created by sound, light, and color frequencies which create grids or a rainbow bridge that allows human consciousness to experience.

Beyond physical reality, the rainbow bridge is a metaphor.

Somewhere over the rainbow we find a pot of gold referring to the alchemy of time and consciousness.

The rainbow bridge is sometimes thought of as a DNA ladder - Jacob's Ladder - a bridge between the earth and heaven.

The journey over the rainbow bridge is the journey home to OZ where everything spirals back at Zero Point - O - Zero - completion of the cycles of time. 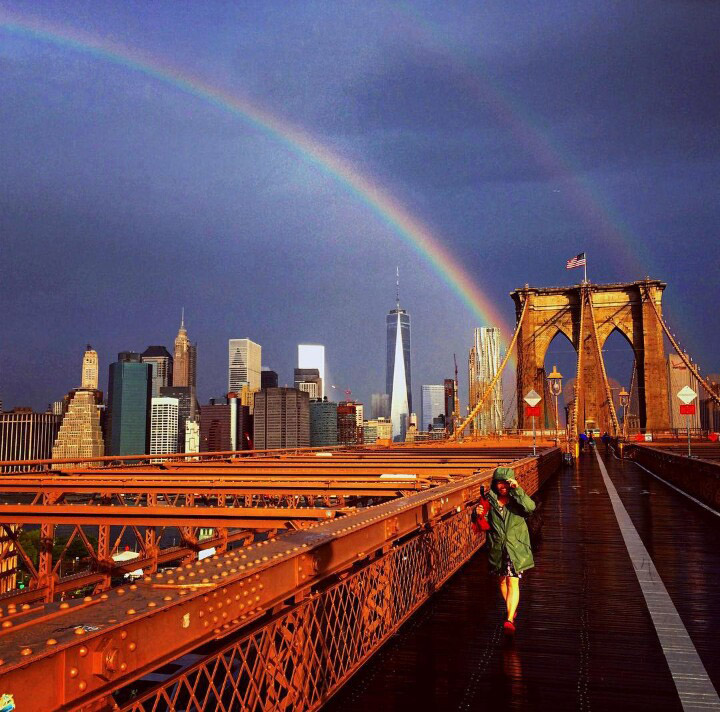 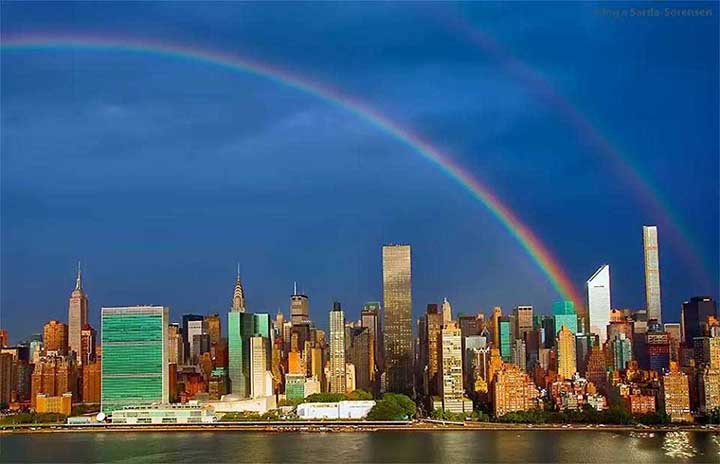 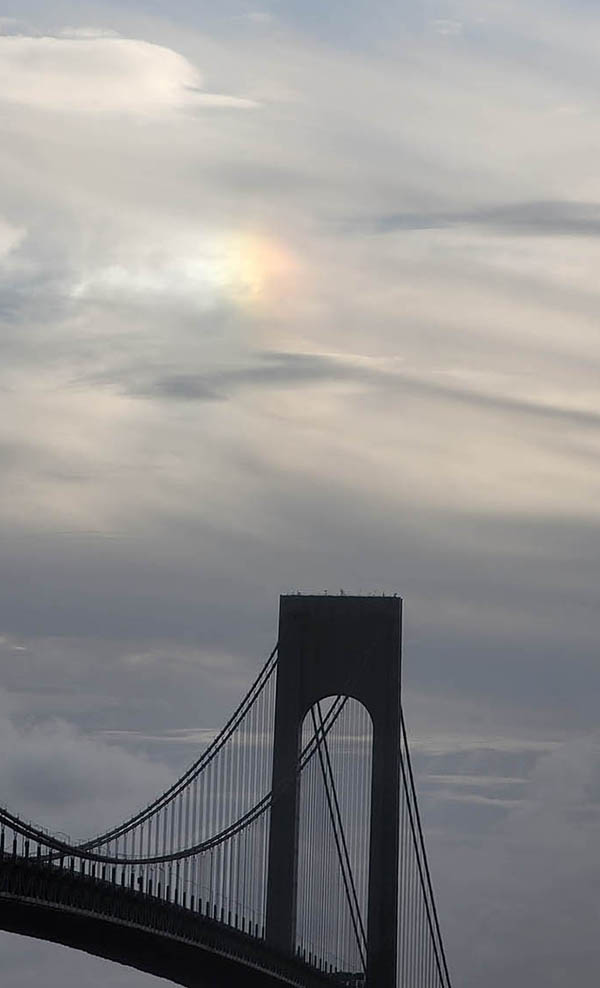 I posted these pic on Facebook and wrote: "I just took the pic of a small rainbow, peeking through the clouds, for my grandson Noah on his 16th birthday. Happy Birthday Noah. The rainbow symbolizes good luck and hope - something we can all use a bit of.

This morning two people had posted their interpretation of the rainbow: "Somebody is watching over you and wants to let you know." "It is God's promise." Thanks Z!

My friend Pat once told me that the first time she drove over the Verrazano Bridge with her young daughters they stopped in traffic at the center of the bridge. One of her daughters looked up and said, "This is the opening to heaven." 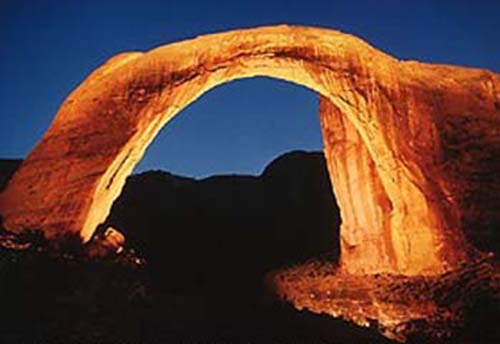 Rainbow Bridge National Monument is administered by Glen Canyon National Recreation Area, southern Utah, USA. Rainbow Bridge is often described as the world's highest natural bridge. The span of Rainbow Bridge was reported in 1974 by the Bureau of Reclamation to be 275 feet (84 m), but a laser measurement in 2007 has resulted in a span of 234 feet (71 m). At the top it is 42 feet (13 m) thick and 33 feet (10 m) wide.

Long, long ago when First Woman the Goddess was created, she became fully grown in four days. It seemed that every Dine (Navajo) Indian tribesman wanted her for his wife.

She did not love any of them, but she did like the handsome ones. Of all the men, however, she thought the most attractive was the Sun-God. Of course, she thought he could never be her husband.

To her surprise, one day Sun-God came up behind her and gently tickled her neck with a feathery plume. She was engulfed with warm sunshine, and in a magical way the Goddess became the wife of Sun-God. He fathered her firstborn, a son.

Not long thereafter, the Goddess was resting beneath an overhanging cliff when some drops of water fell upon her. Soon the Goddess gave birth to a second son, fathered by Water-God. Because the two boys were so close in age, they became known as the Twins of the Goddess.

They lived in a beautiful canyon that later became a part of Dine (Navajo) land. About that time, a Great Giant roamed over the country and ate every human he could catch. He discovered the Goddess but did not want to kill her, because at first sight he fell in love with her beauty.

The Goddess knew of the Great Giant's evil ways and would have nothing to do with him. He became very jealous of her when he saw footprints of the Twins outside her Hogan.

She saw Great Giant approaching, so she quickly dug a hole in the centre of her floor and there hid her two children, whom she dearly loved. She covered the opening with a flat sandstone rock, spreading dirt over it to prevent the Great Giant from finding her Twins.

"Where did these children come from?" he asked the Goddess.

"I have no children." she replied, because she knew that he would try to kill them if he found the Twins.

"You are not telling me the truth," he said. "I see children's footprints in the dirt, right here."

The Goddess laughed heartily and said "Those are only my hand prints. I am very lonesome for children, so I only pretend by making tracks with the heels of my hand and the tips of my fingers, like this. These are the tracks of my children."

As the Twins grew larger, their mother could not hide them any longer. She was alarmed for their safety because of the Great Giant, who saw them one day and tried to catch them. But the Twins were too quick and got away.

The Spirit who made the Goddess appeared with a bow made of cedar wood for Sun-Child.

"It is time for you to learn to hunt," she said to him.

"We must now make some arrows and another bow for your brother," said the Goddess to Sun-Child.

"Mostly, we want to hunt for our father," said Sun-Child. "Mother, who is our father and where does he live?"

"Your father is the Sun-God, but he lives far away in the East," replied the Goddess.

Another bow was made for Water-Child and many arrows for both Twins. They began their journey to the East and travelled as far as they could, but without success in finding Sun-God. When they returned they asked, "Mother, have you lied to us? In the East, we looked everywhere and we could not find our father, the Sun- God."

"He must have gone to the South," she said. Again the Twins set out on another journey, this time to the South, returning without success.

"Please try the West and then the North, if at first you do not find your father in the West," said the Goddess.

She sent the Twins again on their hunting journey, anxious to keep them away and out of sight of the Great Giant. Many moons later, the Twins came back and said, "Mother, have you lied to us four times? Our father was neither in the North nor the West."

"Now I will tell you the truth, my sons," said the Goddess. "Your fathers, the Sun-God and Water-God, live far away in the middle of the great Western Water. Between here and there are great canyons where the walls of the cliffs clap together and would crush you.

"Even if you should succeed in getting through the canyons, there are the terrible reeds that you must cross. Their long knife-like sharp leaves will cut you into pieces.

"But, Mother, we want to go and try to find our fathers," said the Twins.

The Goddess taught the Twins a song of protection for their next journey:"We are traveling in an Invisible Way to seek our fathers, the Sun-God and the Water-God."

This song she taught them to sing four times, the magic number. Day after day as they travelled along, they sang their song for protection.

One day, as they passed a little spider hole in the ground, they heard a voice say, "Ssh!" four times. The Twins looked into the hole and saw Spider Woman.

"Do not be afraid of me, I am your Grandmother. Come down into my lodge," she said four times.

"We cannot enter your lodge, because your doorway is too small," said the Twins.

"Please blow toward the Eastwind, Southwind, Westwind, and Northwind," Spider Woman called out.

The Twins blew in the four directions and the entrance enlarged enough for them to go through. Inside and to their amazement, they saw the lodge walls covered with bundles of bones wrapped in spider webs, exactly the way spiders wrap flies in a web.

"Do not be afraid, my grandsons," said Spider Woman. "These are the bones of bad men whom I killed."

Spider Woman talked with the Twins about encounters they might have on their trip. She taught them songs for their protection and explained what they could do to overcome obstacles they might meet on their way. "I will give each of you a magic Feather- Plume. Hold it before you as you travel, straight up or sideways to carry you safely forward," she said to the Twins.

"Be on the look out for a little man with a red head and a striped back. He will resemble a sand-scorpion, only a little larger--about the size of a Jerusalem cricket," she explained.

"Thank you, Grandmother, we'll be on our way," said the Twins.

Many days later, the Twins heard a voice from the ground. It was from the little man with the red head.

"Do not scorn me because I am so small," he said. "I can and want to help you. Put your hands down on the ground and spit into them four times. Now close your fists, saving the spit until you come to the Big Water. There you can wash off the spit."

The Twins did exactly as they were told, and after thanking the little man with the red head, they again began their travel. Soon the canyon walls that smashed together loomed ahead of them.

They repeated Spider Woman's prayers, holding the Feather-Plumes sideways. As they moved forward the clapping walls stopped long enough to allow the Twins to walk through safely.

When they came to the jungle of sharp reeds, again they sang the song Spider Woman taught them, touching the tops of the reeds with their magical Feather-Plumes.

Behold! The reeds turned into cattails, which pleased the reeds so much that they quickly opened a wide path for the Twins to pass through. A puzzling encounter for the Twins was the giant cliff. They walked around and around its rim, making a complete circle and finally returning to their starting place.

They were making no forward progress, so they sang songs taught them by their mother and Spider Woman. They prayed over and over again. When they opened their eyes, a beautiful Rainbow appeared, creating a large bridge for them to cross over the Grand Canyon of the Colorado River.

After this spectacular adventure, the Twins continued West for a long time, until they saw the Great Water before them. The Water spread so far, they wondered, "How can we ever reach the Turquoise House of Sun-God, which we know is in the middle of the Great Water?"

The Twins walked down to the beach to the edge of the water and washed the spit off their hands, singing and praying at the same time.