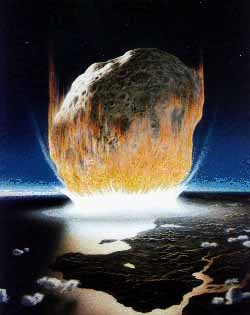 The year 1999 seven month,
From the sky will come a great King of terror:
To bring back to life the great King of Angolmois, (the Mongols),
Before after Mars to reign by good luck
(Century X, Quatrain 72)

Nostradamus' most famous doomsday prediction warns future generations of a King of Terror descending from the skies in July 1999. This holy terror could be linked to the Third Antichrist who may be the fearsome Mabus of C2 Q62 or the North African Terrorist from C2 Q30 who is from the land of the infernal Hannibal's God. "Baal" was also called "Hammon," a name that can mean "Lord of the Sky."

Many interpreters have tried to understand the prophetic significance of Nostradamus bringing back to life the Roi 'Angolmois (the great King of the Mongols) by the last July of this millennium. Genghis Khan united the Mongolians of the Central Asian steppes into an all-conquering army that forged the largest land empire in history. The vast Islamic western wing of his empire included modern-day Iraq, Iran, Pakistan, and the Central Asian republics of the former Soviet Union.

Genghis Khan was one of history's greatest kings of terror. Tens of millions died in the bloody conquests initiated by the warlord and his successors, and his record of devastation and genocide is appalling. According to the prophet, Genghis Khan and his empire are now returning: the warlord has been brought back to life. In 1990 in a major propaganda campaign, the leaders of the People's Republic of China restored Genghis Khan to his "rightful" place in Chinese history.

The final line makes a cryptic reference to Mars. A consideration of the occult meaning of this planet which, in conventional wisdom, represents the God of war and mayhem, opens up the possibility of a positive outcome in the future. The phrase "before and after Mars rules happily" can be interpreted to mean that the higher aspect of Mars, as the God of magic and spiritual transformation, "rules happily" in the new millennium.

At forty-five degrees, the sky will burn,
Fire approaches the great new city,
Immediately a huge, scattered flame leaps up
When they want to have verification from the Norman
(Century VI, Quatrain 97)

In this phrase, Nostradamus refers to a great city in the new world of America near forty-five degrees latitude. Experts agree this could only be New York.


By fire he will destroy their city,
A cold and cruel heart,
Blood will pour,
Mercy to none.

Earth-shaking fire from the center of the Earth.
will cause the towers around the New City to shake,
Two great rocks for a long time will make war,
And then Arethusa will color a new river red.
(Century 1, Quatrain 87)

The young lion will overcome the older one,
On the field of combat in a single battle;
He will pierce his eyes through a golden cage,
Two wounds made one, then he dies a cruel death.
(Century 1, Quatrain 35)

This quatrain foretelling the death of King Henry II of France in a jousting accident is one of the most famous, predocumented, and successfully fulfilled prophecies in history.

In June 1559, Henry II ignored all warnings that Nostradamus gave him and participated in a jousting tournament against the Comte de Montgomery. Both men used shields embossed with lions. Montgomery was six years younger than Henry. A tournament is a field of ritual single combat.

During the final bout, Montgomery failed to lower his lance in time. It shattered, sending a large splinter through the king's gilded visor (golden cage). Along with minor punctures in the face and throat, there were two mortal wounds. One splinter destroyed the king's eye; the other impaled his temple just behind the eye. Both penetrated his brain. Henry lingered for ten agonizing days before dying a cruel death.


The Fire of London

The blood of the just will be demanded of London,
Burnt by the fire in the year 66

The Great fire destroyed London in 1666.

From the enslaved people, songs, chants and demands,
The princes and lords are held captive in prisons:
In the future by such headless idiots
These will be taken as divine utterances.
(Century 1, Quatrain 14)

Before the war comes,
the great wall will fall,
The King will be executed, his death coming too soon will be lamented.
(The guards) will swim in blood,
Near the River Seine the soil will be bloodied.
(Century 2, Quatrain 57)

On July 14th, 1789 the walls of the Bastille, the prison which stood as a symbol to the detested monarchy, were stormed. This was a precursor to the revolution that shook France, and to the rise, and fall, of the guillotine, that stood on the banks of the River Seine.

PAU, NAY, LORON will be more of fire than of the blood,
To swim in praise,
the great one to flee to the confluence.
He will refuse entry to the Piuses,
The depraved ones and the Durance will keep them imprisoned.
(Century 8, Quatrain 1)

This quotation is vintage Nostradamus. He is employing one of his favourite devices: the anagram. "PAU, NAY, LORON" when rearranged becomes NAPAULON ROY, or Napoleon the king, given the Corsican spelling of his name, Napauleone. The text also describes him as a man of 'fire', or of war, rather 'than of the blood', or of royal lineage. The 'Piuses' of the third line are the Popes Pius VI and Pius VII, who were both imprisoned by Napoleon as the fourth line suggests.

From the deepest part of Western Europe
A young child will be born to poor people
Who will by his speech seduce a great multitude,
His reputation will increase in the Kingdom of the East"
(Century 3, Quatrain 35)

Beasts ferocious with hunger will cross the rivers,
The greater part of the battlefield will be against Hister.
Into a cage of iron will the great one be drawn,
When the child of Germany observes nothing.
(Century 2, Quatrain 24)

In the year very not far from Venus,
The two greatest ones of Asia and of Africa:
They are said to have come from the Rhine and from
Hister Cries, tears at Malta and the Ligurian sea-coast.
(Century 4, Quatrain 68)

Liberty will not be regained,
It will be occupied by a black, proud, villainous and unjust man:
When the matter of the Pontiff is opened,
The republic of Venice will be vexed by Hister.
(Century 5, Quatrain 29)

The shocking and infamous armed one will fear the great furnace,
First the chosen one, the captives not returning
The world's lowest crime, the Angry Female Irale - Israel - not at ease,
Barb, Hister, Malta, and the Empty One does not return.

Hitler is referred to as Hister - not only be name but by birthplace. Hister is the Latin for the river Danube on whose shores Hitler was born. The first quatrain provide general background - his parents were poor - his power as an orator needs no description here - and of course Hitler had a catastrophic influence over Japan, the Kingdom of the East.

The ancient work will be accomplished,
And from the roof evil ruin will fall on the great man:
They will accuse an innocent, being dead, of the deed:
The guilty one is hidden in the misty copse.
(Century 6, Quatrain 37)

The great man will be struck down in the day by a thunderbolt,
The evil deed predicted by the bearer of a petition:
According to the prediction another falls at night,
Conflict in Reims, London, and pestilence in Tuscany.
(Century 1, Quatrain 27)

As per his prediction - JFK was shot in the day, at 12 noon, and his brother Robert Kennedy was shot at night, at 1 am. The last line dates the assassinations. For there were student riots in London and Paris in 1968, and in 1966 a flood hit Florence that prompted fears of pestilence. JFK was shot in 1963 and his brother in 1968. The alleged conspiracy that surrounded the assassination was the subject of another of Nostradamus' quatrains.

Lee Harvey Oswald was reputed to have shot Kennedy from the sixth floor of the Book Depository, is this 'the roof' that is mentioned in second line? Or is 'the roof' a metaphor for the conspiracy performed by the CIA, previously Kennedy's protection, his 'roof'. The third line suggests that Lee Harvey Oswald was in fact innocent, and 'the misty wood' of the fourth line may describe either the trees around the grassy knowle, or the misty woods of the secret service.