The White Pyramid of Amenemhet III Amenemhet III attempted to build his first pyramid at Dahshur, but it turned out to be a disaster. Even with the nearby Bent Pyramid as a reminder, Amenemhet III's architects built the his pyramid on unstable subsoil. The Bent Pyramid is built upon compacted gravel, while Amenemhet III's is built on hard clay. The builder's compounded this mistake by building the pyramid in one of the lowest locations of any pyramid in Egypt. It lies only 33 feet above sea level. Further problems arose from the shear number of corridors and chambers within the substructure, and the reliance that the builders placed on their ceilings which had no real stress relieving devices above the king's burial chamber.

Early on ground water from the nearby Nile Valley seeped into the pyramid's substructure causing structural damage, causing menacing cracks to appear in the corridor and chamber walls soon after the pyramid was completed. Even before the limestone was applied to the queen chambers, the weight of the pyramid was pushing down on the ceiling with such force that the walls sank in places up to three cn (two inches) into the pavements. Today the pyramid named "Amenemhet is Mighty" is a sad dark ruin on the Dahshur field, aptly sometimes called the Black Pyramid. Even though it took 15 years to build, rather then being buried in this pyramid, Amenemhet III chose to build a second pyramid at Hawara, closer to his beloved Fayoum.

The pyramid was first written about by Perring, who apparently lacked the time to explore the ruins at all. His campsite had been attacked by Bedouins, and it would seem that Perring lost his interest in Dahshure. The Lepsius expedition seems to have noticed it in 1843, but that was all, until around the early 1900s. It was de Morgan, assisted by George Legrain and Jequier who finally carried out extensive excavations. Yet at that time, excavations methods remained crude, and many questions about the pyramid remained to be answered. In fact, their investigation was never completed. Finally, between 1976 and 1983, a team from the German Archaeological Institute of Cairo lead by Arnold, carried out a modern, extensive examination.

The valley temple for this complex is badly damaged but it is one of the first 12 Dynasty valley temples to have been located and partially cleared. It was very simple, with two broad open courts built on ascending terraces. Interestingly, the side walls of the first court were thickened to form a pylon like gateway. Within these ruins was found a limestone model of the subterranean corridors and chambers of a 13th Dynasty pyramid that has not yet been discovered.However, some Egyptologists believe that this model, though varying somewhat, was actually of Amenemhet III's pyramid at Hawara. 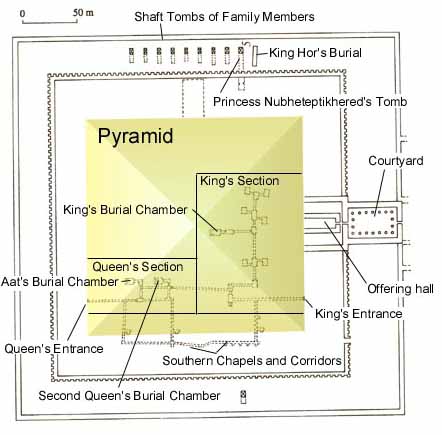 The mortuary temple connected to the pyramid was relatively small and simple, consisting of an entrance, an open courtyard with eighteen granite columns in the shape of eight stemmed papyrus plants. However, it was badly damaged and the layout is really a guess. Behind the courtyard we believe was a long, offering hall. Two plastered, whitewashed mudbrick enclosure walls surrounded the pyramid, with the inner wall dividing the outer open courtyard of the mortuary temple from the inner sanctuary. This inner wall was also decorated with niches, while the outer wall did not. It is uncertain whether there was a north chapel.

One must wonder about the architects of this pyramid, and their level of expertise. The pyramid core was built of mudbrick, just as earlier 12th Dynasty pyramids. However, it liked the stone wings and framework of the earlier pyramids. The builders attempted to strengthen the structure by building the core in step form. The outer mantle was made of five meter this blocks of fine white limestone held together with a system of wooden dovetail joining pegs. Near the top of the pyramid, the wall's angle of inclination decreased. The pyramid was capped off with a beautiful dark gray granite pyramidion, discovered in the rubble in 1990, that was originally 1.3 meters tall. All four sides of the pyramidion bore inscriptions and religious symbols. The underside was beveled to fit into the casing block below.

One side of the Pyramidion

However, there are questions about the pyramidion. One inscription containing the name of Amun was destroyed, presumably on purpose during the reign of Akhenaton, The pyramidion must have already fallen off by that time, or it was never placed on the pyramid apex. It may have even been a symbolic pyramid on the complex grounds.

For the first time, we see a single pyramid built to accept the remains of both a king and several of his queens. Therefore, the substructure is rather complex, and differs entirely from earlier 12th Dynasty pyramids. In fact, even given the number of expected burials, it was more complex then the underground layout of earlier pyramids. The subterranean area is divided into two parts, one of which was for the king and the other for two of his consorts. The two sections are connected by a corridor. Near the southeast corner on the east side of the pyramid, at the lowest foundation layer, is located the entrance to the king's tomb.

Most of the king's section of the pyramid lies under the eastern quadrant of the pyramid. From the entrance, a stairway, for the first time since the 3rd Dynasty, led down to an a chamber with a niche high in the wall for the king's canopic chest. This to a short stairway that in turn leads to an entrance corridor and an entire system of passageways, shafts, barriers and chambers at various levels, all of it covered in fine white limestone. In fact, there are more underground chambers and passages than any other pyramid since the 3rd Dynasty.

Following the corridor we find another left 90 degree turn leading past a set of annexes before a final left 90 degree turn finally takes us to a small antechamber and then the burial chamber. The burial chamber is somewhat offset from the vertical axis of the pyramid, but was probably suppose to be directly under it. Apparently the builders lacked the knowledge that others before them had demonstrated. The burial chamber is also sheathed in fine white limestone, and oriented east-west. Though Amenemhet III was not buried in this pyramid, there was a pink granite sarcophagus within the burial chamber near the west wall. The sarcophagus had a vaulted top and niches that imitated the perimeter wall of Djoser's Step Pyramid at Saqqara. Near the north end of the east side of the sarcophagus was a set of eyes for the occupant to lookout in the direction of the sunrise and resurrection.

There were two means of getting from the king's section of the pyramid to the queens section, the direct route from the short, second corridor and the more complex corridor leading south off of the entrance corridor. While the first connecting corridor leads almost directly to the queen's burial chamber, the second passage, sometimes called the "South Tomb", contains a labyrinth of passageways and six chapels, including a ka chapel. Apparently this part of the substructure also imitates a section of Djoser's complex. Lehner believes this section of the tomb acted as a counterpart to the king's burial suite, acting somewhat like an internalized cult pyramid.

The queen's section mostly lies under the southern quadrant of the pyramid. There was a second outside entrance to the queens chambers lying opposite that of the king's entrance, only on the west side of the pyramid. Here, there was also a descending stairway leading to a chamber with a niche above the doorway for the canopic chest of Queen Aat. A corridor out of this chamber that first passes a short corridor on the left leading to the burial chamber of Queen Aat, who was about 35 when she died It then continues past a second northern corridor that leads to the burial chamber of the second queen, who may have been Neferuptah. This queen was probably around 25. The bones of both queens were found within their chambers. On the west wall of each burial chamber were sarcophaguses that were very similar to that of the king's. However, the sarcophagus of the second queen lacked the niches found on Amenemhet III's sarcophagus.

Though thieves had long ago broken into this pyramid, a few items of funerary equipment were found in the queen's chambers. Within Aat's chambers there were two mace heads discovered along with seven alabaster cases in the form of ducks, an alabaster unguent jar and scattered pieces of jewelry. Thought the canopic chest was broken, all the pieces were found and it contained one canopic jar. In the second queen's chambers were found an obsidian vassals decorated with gold bands, three alabaster duck shaped vessels, granite and alabaster mace heads and jewelry. There wee also parts of this queen's stone shrine, originally encased in gold and containing a ka statue.

Along with the bones of the two queens, four additional burials were discovered within the pyramid. Because the name of Amenemhet IV appears on the valley temple, some believe that two of these burials may have been that king and the last regent of the 12 Dynasty, Queen Sobekneferu. If so, the pyramid was most likely reopened after having been previously sealed. Amenemhet IV and Queen Sobekneferu may have begun pyramids at Mazghuna, but these were far from completed and it would appear that no burials took place.

The pyramid was presumable sealed in year 20 of Amenemhet II's reign. This took the form of not only filling the entrance stairways with limestone blocks, but also the king's chamber and antechambers, the queens' burial chambers and the entrance corridors to the ka chapels. Other chambers and corridors were filled with mudbrick. This may have been a precaution against the pyramid's collapse, but chambers in Amenemhet III's pyramid at Hawara were similarly filled.

Outside the pyramid, between the first and second enclosure walls on the north is a row of ten shaft tombs for the remainder of the royal family. We know that the second tomb from the east belongs to the king's daughter, Princess Nubheteptikhered. The first tomb on the east was usurped by King Auibre Hor, an insignificant ruler of the 13th Dynasty. The wooden statue of his Ka found within this tomb is one of the most valuable objects in the Egyptian Antiquities Museum. King Hor's mummy was found within a wooden coffin discovered in the tomb, along with some items of funerary equipment. This included a wooden canopic chest that bore the name of Nimaatre, a name for Amenemhet III. However, the view these days among Egyptologists seems to be that the name refers to a Khendjer, a successor of Hor's. Khendjer later took the name Userkare. There seems to be considerable confusion around this particular burial among archaeologists. 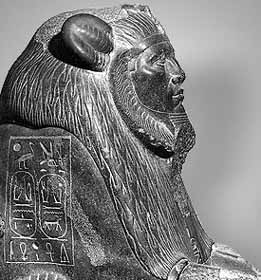