Pyramid of Senusret III at Dahshur 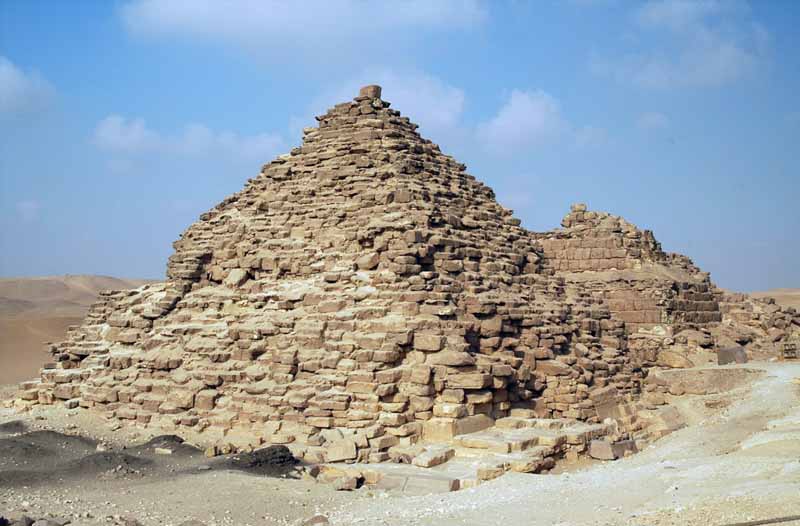 The pyramid of Senusret III at Dahshur was apparently first investigated by de Morgan during the 1894-1895 excavation season. It is located northeast of the Red Pyramid, and far surpasses the pyramids of his predecessors in the 12th Dynasty in size. It is also very different in many respects in its underlying religious conception and represents another developmental milestone in pyramid design.

We know nothing of the valley temple that may have been associated with this pyramid, for it has never been found, and while there was certainly a causeway that lead to the pyramid from the southeast, it has not yet been investigated. There was originally a small mortuary temple on the center of the pyramid's east side. It is too ruined really to make anything of the plan of this temple, but Arnold theorizes that it evidences the decline of the traditional mortuary cult, reduced to an offering hall with a granite false door, storage magazines and an entrance chamber.

From fragments, we believe the wall decorations were executed in high relief, bearing the royal name and titles. Other fragments, possibly from a temple antechamber, reveal deities moving towards the king, with lower registers recording rows of officials and the slaughter of cattle. Still other fragments, very probably from the offering hall, show the king enthroned before an offering table with rows of offering bearers, the offering list, cattle slaughter and gifts.

However, within the new, expanded enclosure wall to the south that was built later, a larger, new temple was also constructed. This temple was ruined, but not as severely as the eastern temple. We believe it may have consisted of two sections, a forecourt with papyrus stem columns, and rear sanctuaries. Fragmentary reliefs found within this temple depict the king in the typical cloak worn for the Sed-festival, along with deities, such as the ram headed gods Khnum and Herishef. Some Egyptologists feel that design elements within this temple are evolutionary forerunners of the New Kingdom tombs at Thebes.

Many of the earlier 12th Dynasty pyramids used a framework consisting of extensions from the corners of the core and cross slabs between them to form a grid. This framework was then filled with rubble, sand or mudbrick and then overlaid with casing. A ditch was often dug around the pyramid in order to secure the bottom of the casing. While Senusret III's pyramid apparently followed the earlier mode of securing the casing, it abandons the framework leaving only a mudbrick core.

The core was built up in stepped horizontal courses. Interestingly, the mudbricks vary in size, suggesting that no mould was used, and there are finger marks on some bricks, presumably to monitor the progression of the work. These bricks were laid without mortar, though sand was used to fill the seams. Apparently, the pyramid lasted into the reign of Ramesses II in the New Kingdom, because from the graffiti of visitors we know that at that time it continued to inspire admiration. However, within two hundred years after Ramesses II's reign, it laid in ruins. 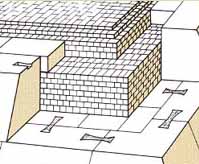 Like prior pyramids, the casing was joined with dovetail cramps and the bottom rested on a foundation built in a trench of roughly squared block atop three courses of mudbrick. Behind the outer casing, the builders laid backing stones on the budbrick core in order to tie the casing stones and the core together.

Just as Petrie had difficulty finding the entrance to Senusret II's pyramid at Lahun, de Morgan also had a hard time finding the entrance to this pyramid. He tunneled extensively into and under the pyramid before, in November of 1895, finally hitting upon an ancient robber's tunnel that finally led him to the burial chamber. No longer did kings place the entrances to their pyramids in the middle of the north side of the structures, or consistently anywhere. To complicate matters further, there is a north chapel, as was found in earlier temples, that usually hid the entrance doorways.

The entrance this time was to be found hidden in the courtyard pavement west of the pyramid near the northwest corner. From there a vertical shaft dropped to a descending corridor that lead off to the east under the pyramid, finally turning south and arriving at first an antechamber and then the burial chamber. To the east of the antechamber is a small annex, recalling the plan of many Old Kingdom pyramids. 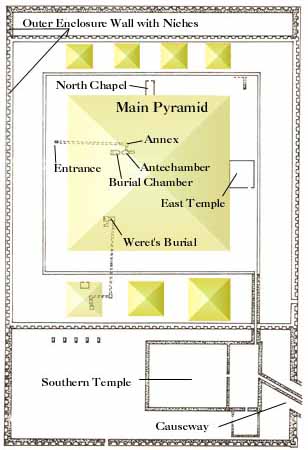 Oddly, the burial chamber does not lie very close at all to the vertical axes of the pyramid. This chamber has a false vaulted ceiling with a stress relieving gabled roof built of five pairs of limestone beams, each weighing 30 tons. Above this was another mudbrick vault. The walls of the chamber are sheathed in granite and covered in a thin layer of white stucco (gypsum). Elsewhere in the substructure, the floors, ceiling walls and false door are covered in cheaper limestone and painted with red and black dots so that it would resemble the more expensive and durable pink granite.

Keeping with tradition, a marvelous granite sarcophagus was located by the west wall of the burial chamber. Like those of a number of future 12 dynasty rulers, it had niches (fifteen) along its side in imitation of the Djoser Step Pyramid enclosure wall at Saqqara. This design is often referred to as a palace facade. A niche was placed in the south wall of the burial chamber for the king's Canopic chest. In the north wall a blocked opening once led back into the entrance corridor. 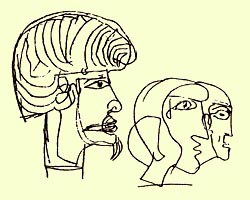 While grave robbers entered the pyramid during the Hyksos period, and even left rough sketches of themselves, this may not entirely be the reason that the pyramid was found almost empty. Because no canopic equipment was found, and also the fact that the pyramid has no corridor barriers and only dust was found in the sarchophagus, Joe Wegner, Lehner and others have expressed the view that Senusret III may not have been buried in this pyramid at all, but rather in his elaborate funerary complex in Abydos. Until very recently, that tomb in Abydos was thought to be symbolic (a cenotaph).

However, the question has been raised as to why Senusret III would suddenly revert to a tomb at Abydos when his predecessors and at least his immediate successors choose to be buried in their pyramid complexes in northern Egypt. Arnold seems to believe that the burial chamber we attribute to Senusret III was really a queen's chamber, because a kings chamber should lie closer to the vertical axes of the pyramid. In other words, Arnold seems to believe that the real burial chamber has never been found.

All that was found in the king's chamber, other then the sarcophagus, was some pottery vases and pieces of a bronze dagger with an ivory handle.

To the north of the pyramid de Morgan also discovered the tomb of princess arranged in two galleries. This system of tombs is much more complex then they originally appear. Arnold believes that at least four of the tombs in the upper gallery probably had superstructures in the form of a pyramid. Under these galleries, a principal shaft provided access to a long vaulted corridor connecting four sets of chambers, each built to hold a sarcophagus and canopic chest. There were also one or two niches in the walls. Below this was a second level where a corridor connected with eight niches containing sarcophagi, two of which were inscribed. One carried the name of a woman named Ment and the other Senet-senebti, who may have been princesses.

In the lower galleries, hidden away, archaeologist also found some splendid jewelry, as well as other items of the women's burial equipment. Some of this jewelry (333 pieces) belonged to a princess. Sit-Hathor who was probably Senusret III sister and possibly also his wife. Other items belonged to a woman named Mereret (Merit) who some sources reference as his wife, while others say she was a daughter. Perhaps she was both. Some of this jewelry, which includes several gold pectoral studded with precious stones, gold bracelets and other precious items, are exquisite examples of 12 Dynasty craftsmanship. The items may now be found in the Treasure Chamber at the Egyptian Antiquity Museum in Cairo. 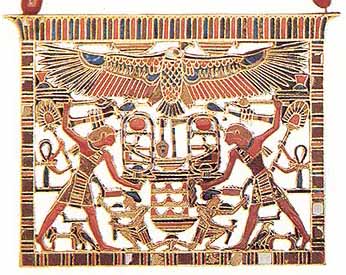 In addition to these tombs, three other small pyramids stood along the south wall of the main pyramid. These tombs also probably belonged to royal woman. In 1994 during an investigation by the Metropolitan Museum of New York, a shaft was found in the western most of these tombs that leads to a tunnel which in turn leads to an antechamber, burial chamber and canopic chamber (annex) that is actually located under the southwest corner of the king's pyramid. A granite sarcophagus fills the western end of the burial chamber. Fragments of a canopic jar found within this tomb bear the name of Khnumetneferhedjetweret (Weret), who was the wife of Senusret II and the mother of Senusret III.

Both the tombs on the north and south sides of the pyramid were originally thought to be mastabas, but in 1997, further investigation by Deiter Arnold revealed that they were, in fact, probably small pyramids.

All of these structures including the main pyramid and the subsidiary pyramids were surrounded by an outer perimeter wall with a niched, exterior facade. It was north-south oriented and to the north and south another niched wall was constructed, all of which again points to a revival of interest in Djoser's Saqqara complex. An inner perimeter wall surrounded only the pyramid and north chapel.

It should also be noted that near the northwest corner of the complex six wooded funerary boats were found buried in the sand. Each of the boats was six meters long (20 ft), and one or more wooden sleds were buried along with them. Two of these are currently in the Egyptian Antiquity Museum, while the other two are in the USA at the Field Museum of Natural History in Chicago and the Carnegie Museum of Natural History in Pittsburgh.