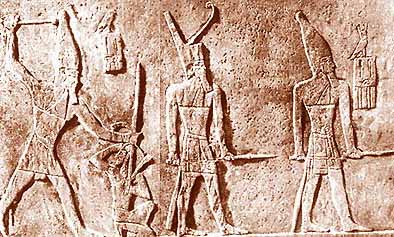 Sekhemkhet was an ancient Egyptian king (pharaoh) of the 3rd Dynasty during the Old Kingdom. His reign is thought to have been from about 2648 BC until 2640 BC. He is also known under his later traditioned birth name Djoser-tety and under his Hellenized name Tyreis (by Manetho; derived from Teti in the Abydos King List). Sekhemkhet was probably the brother or eldest son of king Djoser. Little is known about this king, since he ruled for only a few years. However, he erected a step pyramid at Saqqara and left behind a well known rock inscription at Wadi Maghareh (Sinai Peninsula).

The duration of Sekhemkhet's reign is believed to have been six to seven years. The royal Turin Canon attributes six years of reign to Sekhemkhet, a figure also proposed by Myriam Wissa based on the unfinished state of Sekhemkhet's pyramid Using his reconstruction of the Palermo Stone (5th Dynasty), Toby Wilkinson assigns seven years to this king. This figure is based on the number of year registers preserved in Cairo Fragment I, register V. Wilkinson states that "this figure is fairly certain, since the king's titulary begins immediately after the dividing line marking the change of reign.". Similarly, the historian Manetho lists Sekhemkhet under the name of Tyreis and indicates that he reigned for seven years. Nabil Swelim, by contrast, proposed a reign of nineteen years, because he believed that Sekhemkhet might be the Tosertasis mentioned by Manetho. However, such a long reign is at odds with the unfinished state of the buried pyramid and this view is generally rejected by Egyptologists.

Little is known about activities conducted during Sekhemkhet's reign. The only preserved documents showing Sekhemkhet are two rock inscriptions at Wadi Maghareh in the Sinai peninsula. The first one shows Sekhemkhet twice: once wearing the Hedjet crown, another wearing the Deshret crown. The second inscription depicts a scene known as "smiting the enemy": Sekhemkhet has grabbed a foe by its hair and raises his arm in an attempt to club the enemy to death with a ceremonial sceptre. The presence of these reliefs at Wadi Maghareh suggests that local mines of copper and turquoise were exploited during Sekhemkhet's reign. These mines were apparently active throughout the early 3rd Dynasty since reliefs of Djoser and Sanakht were also discovered in the Wadi Maghareh.

Several clay seals presenting an unusual Nebty name together with Sekhemkhet's Horus name were found at the eastern excavation site on the island of Elephantine. The Egyptologist Jean Pierre PŠtznik reads the Nebty name as Ren nebty meaning The two ladies are pleased with his name. It is not entirely clear whether this is indeed Sekhemkhet's nebty name or that of a yet unknown queen.

Almost everything we know about Sekhemkhet ("Powerful in Body"), we know because of his unfinished (Buried) pyramid at Saqqara, and it seems to give us little facts about his life. The only evidence outside of this tomb is a scene depicted at Wadi Maghara in the Sinai which bears his name. It is a military scene, classical in that it probably shows Sekhemkhet, with his raised mace, about to smite his desert enemies. This relief actually shows a procession of Sekhemkhets. In front of the smiting king, who is wearing the White Crown is a second depiction of the king wearing the Red Crown, and in front of him, another of Sekhemkhet back in the White Crown.

However, we are not really sure of much about this king. According to the Turin King-list, Djoser's immediate successor was identified by his personal name Djoser-Ti (Djoserty), and ruled for only six years. It now seems that most Egyptologists believe Djoser-Ti and Sekhemkhet were one and the same person, though some might still argue otherwise. His reign would have been from about 2649 until 2643 BC.

Judging from an inscription on his pyramid at Saqqara, and from its very design, we can also tentatively guess that the great Imhotep survived Djoser, his predecessor, and was again the mind behind the funerary complex works. Also, because of his short reign, and particularly his truncated pyramid, many believe he came to a sudden and unexpected death, though we have no idea what might have caused it.


The Buried Pyramid of Sekhemkhet 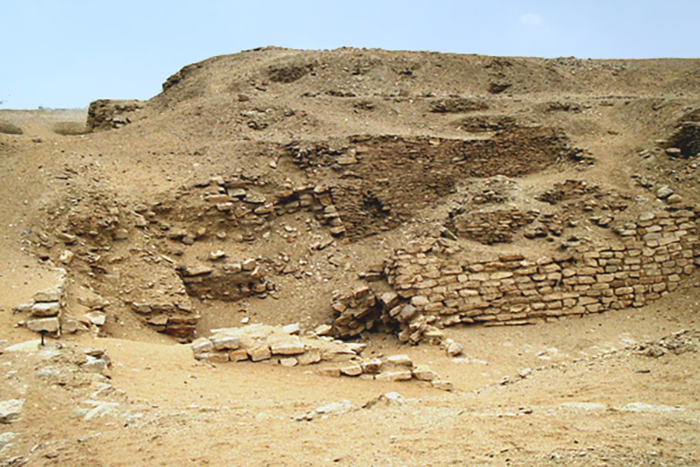 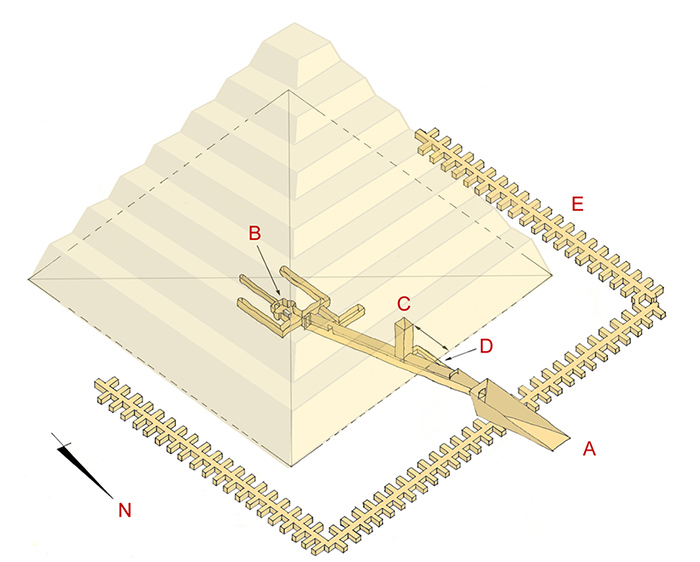 The Buried Pyramid (also called the Pyramid of Sekhemkhet) is an unfinished step pyramid constructed ca. 2645 BC for Sekhemkhet Djoserty. This pharaoh was the second of the Third Dynasty of Ancient Egypt, which reigned over Egypt circa 2686-2613 BC and is usually placed at the beginning of the Old Kingdom of Egypt. Many historians believe that the third dynasty played an important role in the transition from Early Dynastic Period of Egypt to the Age of the Pyramids. The pyramid may be visited, but the public is not allowed access to the base and substructures.

Sekhemkhet Djoserty was also the successor to the better-known pharaoh Djoser, who was buried in his famous step pyramid at Saqqara. The buried pyramid was originally modeled after Djosers step pyramid and is located several hundred metres southwest. It is also arguable that the pyramid of Sekhemkhet was originally designed to surpass the step pyramid of Djoser but barely made it above ground level and hence was given the name the Buried Pyramid. Its incompletion is thought to have been due to Sekhemkhet's short reign as ruler, which was approximately six years

The Buried Pyramid was a previously unknown structure until, in 1951, Egyptologist Zakaria Goneim noticed the odd rectangular shape in the desert while excavating the nearby Unas complex. A three part rubble-coursed enclosure wall was first discovered, and by digging to its bottom, it was found to be 5.2 m (17 ft) tall and 18 m (60 ft) thick. He later discovered that the wall further extended on both sides to dimensions of 520 m (1,700 ft) in the north-south axis and 180 m (600 ft) to the east-west and was full of false doors and niches.

The pyramid itself was located at the centre of the complex, with a base length of 115 m (377 ft), it had only one step and was unfinished. During the next stage of excavation, Goneim discovered a descending passage to the north side which led to a gallery blocked with rubble and masonry. There were a number of objects found during the excavation of this gallery including animal bones, demotic papyri, and Third Dynasty stone vessels. In a decayed wooden casket, gold was discovered which included gold bracelets, cosmetic cases, beads, and jars inscribed with Sekhemkhet's name.

When the blocked wall was breached, on May 31, 1954, an unfinished and undecorated burial chamber was discovered. Inside it, lay an alabaster sarcophagus cut from a single block with a vertical lid which seemed to still be sealed. However, on June 26, 1954, after great difficulties to unblock and raise the lid, the sarcophagus was opened and to everyone's disappointment, it was empty.

Criticism of Goneim and his subsequent suicide on January 12, 1959 dampened the interest in the pyramid and investigation was left incomplete.

In 1963, the excavation was re-opened by Jean-Philippe Lauer due to the possibility of a south tomb and his desire to find the missing mummy. Lauer did indeed find a partially destroyed tomb under the southern side that at some point had been looted by robbers. He found a wooden coffin with the remains of an unidentified two-year-old child and gold leaf fragments.

Sekhemkhet's pyramid complex was built southwest of Djoser's at Saqqara, and it includes a pyramid, a subterranean structure and a necropolis complex. The name Imhotep appears on a section of the complex's enclosure wall. While the name itself contains no titles and thus it is uncertain if this is the same architect that planned Djoser's Step Pyramid, the line of succession and similar architectural features suggest such possibility.

The ancient name of Sekhemkhet's pyramid is unknown; however, it is colloquially known as Buried Pyramid due to its unfinished nature as well as it being previously unknown until its discovery in 1952, when it was found beneath the sands. Its present state is more similar to a mastaba, only reaching 2.43 m (8 ft) of height. The pyramid's foundations stand upon an uneven rock surface, leading the builders to try to level the terrain by building terraces, some reaching ten metres high.

The pyramid was to be stepped right from its inception. With a base 115 metres (377 ft) in length, it suggests that, if it had been completed, the superstructure would be taller than its neighbor, with seven steps and rising to 70 metres (230 ft).

As the pyramid was unfinished, it never received its limestone casing, but the construction technique can be still be made out: the limestone blocks are inclined inwards by 15°, with sloping courses of stone laid at right angles to the incline. 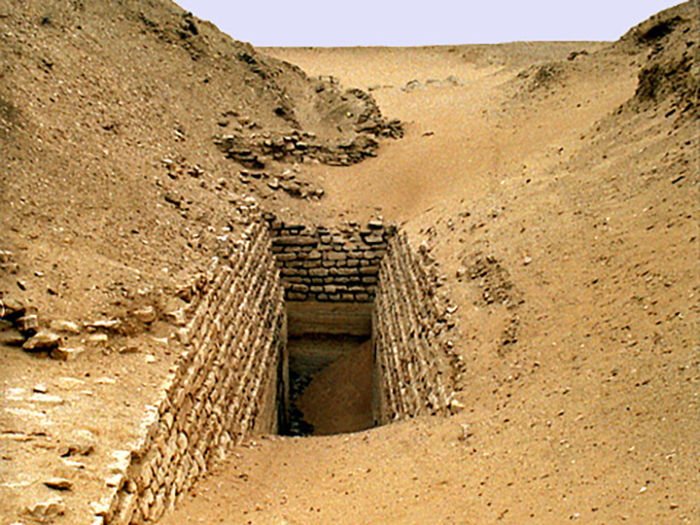 The entrance to the subterranean structure lies to the north, starting with a narrow passage that descends for about 60,96 m (200 ft) until meeting a vertical shaft from the top of the corridor. At this spot, another passage leads down to a row of 136 unfinished galleries which forms a U shape around the pyramid. Two further such magazine galleries appear right before the entrance to the burial chamber with a similar disposition, like their counterparts, they were never finished.

The burial chamber has a base measurement of 8,8 m (29 ft) x 5,18 m (17 ft) and a height of 4,5 m (15 ft). It was also left unfinished, yet, it contained a complete burial arrangement. The sarcophagus is cut from a single block of fine alabaster; its lid was vertical, slid into place and held at the front face by means of mortar sealing.

The complex is oriented with a north-south axis, but with an accuracy deviation of about 11°. One notable feature of this complex is an inner wall known as "White Wall" made out of limestone covered with red mason's lines and graffiti. It remain unknown whether Sekhemkhet's complex would include any mortuary temples or other features also found in Djoser's complex. Its unfinished state presents difficulty for such conjectures. The actual entrance to the complex is unknown.

In 1963, J. P. Lauer found, offset from the center to west axis of the pyramid and under a mastaba-like structure with dimensions 32 m (104,9 ft) x (52,4 ft), the foundations of the so-called South Tomb. It stands closer to the pyramid itself than in the complex of his predecessor.

In the substructure of the mastaba, following a passage accessed by a vertical shaft, the excavators unearthed a chamber where they found a wooden coffin with the remains of an unidentified two-year-old child. It is certain the child is not Sekhemkhet himself, since he is represented as an adult in reliefs from Wadi Maghara in Sinai. Also found were animal bones, stone vessels and gold jewelry from the Third Dynasty, as well as traces of a robbery of the tomb.

The enclosure walls had a niches similar to the one on the walls of the Djoser complex, and was clad with Tura limestone that has been preserved in the first north wall, as they had been filled with the extension. The walls were about ten meters high. The extension walls may have halted during the first stages of construction or the Tura limestone casing was stolen.