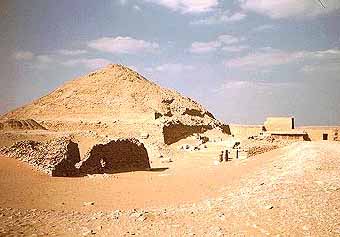 As was customary during this period of time in ancient Egypt, a number of Pepi II's queens had their own pyramids near the king's in South Saqqara, a necropolis of Memphis, Egypt's capital during the Old Kingdom. These queens' pyramids belong to Neith, Ipwet (Iput II) and Udjebten (Wedjebten). Apparently another queen, Ankenesmerire III (Ankhesenpepi III) 1, choose to have her pyramid built closer to her fathers, Merenre, who was Pepi II's brother. This complex of temples is interesting because it was very complete. Not only did Pepi II's complex have all the components of traditional 6th Dynasty royal tombs, his queens tombs had all the components that were expected to be found in queens. tombs. They each had a main pyramid, a cult pyramid and a mortuary temple. No queens that we know of ever had a causeway or valley temple.


The Pyramid of Neith

Her tomb is located at the northwest corner of Pepi II's complex, and is the finest and oldest of these queens' pyramids. Her complex was surrounded by its own enclosure wall.

The entrance of this pyramid's mortuary temple was at the southeast corner of the perimeter wall. It was flanked by two small limestone obelisks bearing the queen's name and title. As with most pyramids of this period, there are inner and outer sections to the mortuary temple. A vestibule was directly within the entrance and has been named by Egyptologists, the lions room.

Reliefs found in this room depicted lions carrying ornamental sashes. As with most king's pyramids, there was also an open, pillared courtyard, along with five storage annexes completing the outer part of the mortuary temple. On the walls of the courtyard were found scenes with offerings and the queen. The inner sanctuary consisted of a small chapel and offering hall.

The chapel, as was also customary for queens mortuary temples, contained only three niches as opposed to that of most king's chapels which contain five.

South of the chapel, the offering hall began in the middle of the east wall of the pyramid. It of course had a false door, so that the deceased could partake of her symbolic meals, traveling from the pyramid into this room and back again. In front of the false door is a stepped alter that still sands in its original location. The walls of the offering hall were adorned with presentation scenes.

Like the other queens, Neith's complex had its own cult pyramid which was about 5.25 meters (18 feet) square, but nevertheless had a miniature passage leading to a small, rectangular chamber. The chamber, when found, was covered in shards of pottery vessels.

This entrance was located in the middle of the pyramid's north side, and there was an entrance chapel with scenes depicting offering bearers. On the south wall of the chapel was a granite false door that sealed the entrance corridor. The entrance corridor initially descended, but a pink granite barrier was placed at the point where it became level.

However, prior to arriving at the burial chamber, there was another barrier. The burial chamber itself was located on the pyramids vertical axis, and had a flat ceiling with astronomical decorations (stars on a dark background). This room was oriented east-west. As in only one other queen's pyramid before it, there were pyramid texts decorating its walls.

However, only three walls revealed pyramid text, while the fourth wall, west of the sarcophagus, had a symbolic palace facade. Her mummy was not found in the burial chamber, but fragments of alabaster and diorite vessels were. Her empty red granite sarcophagus remains in the chamber, along with her canopic chest of the same material. East of the burial chamber there was a small room we refer to as a serdab.

Jequier, one of the archeologists who excavated this pyramid made a unique discovery at the southeast corner of the pyramid. here, he found a number of wooden model ships lying in a shallow pit. Their variety and state of preservation is unparalleled.


The Pyramid of Ipwet (Iput II)

Ipwet, or Iput II, is was one of Pepi II's less attested queens. The principal queen of Teti, who was Pepi II's grandfather, was also named Iput (I), so she may very well have been of royal blood 1. However, her title did not refer to her as "King's mother". Apparently, prior to this dynasty, pyramids were not built for queens who bore no pharaohs.Her pyramid complex is located on the southwest corner of Neith's complex.

Her mortuary temple was laid out like the letter L. Like that of Neith's the entrance of her mortuary was flanked by two small obelisks with inscriptions of the name and title of Ipwet. This gateway was made of pink granite. It is difficult to assess the layout of the mortuary temple, but on the east side of the pyramid stood the offering hall, which had a reddish quartzite false door that has been mostly preserved. Otherwise, it had the expected elements, including a vestibule, open courtyard, we presume a small niche room, an offering hall and storage annexes.

This pyramid is now almost completely ruined, but it does not differ much from that of Neith's. Significantly however, it was smaller, with poorer furnishings. Egyptologists assume that her sarcophagus was made of pink granite.

The most interesting aspect of this pyramid has nothing to do with its construction, or Queen Ipwet, but rather a granite sarcophagus that Jequier discovered in the westernmost storeroom of the mortuary temple. We believe it might have belonged to a Queen Ankenesmerire IV (Ankhesenpepi IV), though considerable doubt remains. She would have been another of Pepi II's consorts and may have been the mother of an insignificant king of the 8th Dynasty named Neferkare Nebi. Her relationship to the other queens by the same name is unknown. She probably outlived Pepi II and even married again. An inscription on a stele at Abydos would seem to indicated that she became the wife of a Prince Iuu.

But what is informative to us is the clearly poor form of burial that illustrates the material and social decline of the royal family after Pepi II's death.

Perhaps even more important were inscriptions found on both sides of the basalt sarcophagus lid that resembling the Palermo stone.. At the time of the discovery in 1932, these inscriptions were unreadable, but modern photographic enhancement by French Egyptologists Michel Baud and Vasil Dobrev allowed a new, and sensational discovery. It contained part of the royal annals of the 6th Dynasty, with considerable new information.

The debate over aspects of this discovery will continue for some time. However, the context of the inscription seems to lend support to the rule of a King Userkare near the beginning of the 6th Dynasty, perhaps are a period of around four years. 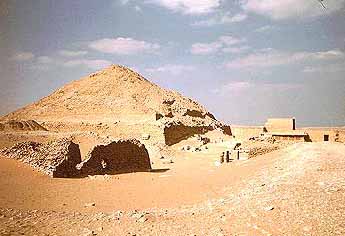 The pyramid in the background is that of Pepi II.
In the foreground, the ruins are of Udjebten's pyramid.

The pyramid complex of Udjebten was located on the southeast corner of Pepi's enclosure wall. We believe that she was a daughter of Pepi I, and wife of Pepi II.

The mortuary temple of Udjebten was very simple, with an entrance on the north side. The temple contained the basic elements, with a vestibule, an open courtyard, but without pillars, and interestingly a chapel like room that seems to have only had two statue niches. The walls of this niche room are decorated with reliefs of the queen before a goddess and others depicting the slaughtering of cattle. Another small fragment of reliefs show the base of a throne, apparently similar to a scene in the chapel of Neith's mortuary temple. Of course there was also an offering hall. Like the pyramid itself, the mortuary temple was completely ruined, with the only openly visible evidence of its existence being the offering table of alabaster which bears an inscription with a funerary formula and the queen's name. Other fragments bear an inscription with a decree protecting the queen's cult.

Of Pepi II's queens' pyramids, Udjebten's was probably the most ruined when discovered by Jequier. Even the core structure was barely discernible. However, with luck he did find a few fragmentary inscriptions from the mortuary temple that proved the pyramidion was sheathed in the finest gold.

Below ground, in the substructure of the pyramid, the ground plan does not differ much from that of the pyramids of Pepi II's other queens, though there was no serdab adjoining the antechamber. The walls of the of the burial chamber and possibly the corridors were again covered in pyramid text, of which 84 fragments were recovered. This represented about one tenth of the actual inscriptions.

The main pyramid complex of Udjebten has an enclosure wall, but a second wall encloses both the main complex and a secondary complex of structures. They resemble houses and storage facilities, and inscriptions here refer to a family line of priests. Each of her beneficiaries had a chamber here, and a small courtyard in which they set up proxy symbols of their real households and tombs. These beneficiaries apparently shared in her funerary estate, much as she shared in the estate of her husband, Pepi II.